Officials from the Moshannon Forest District gather around the alidade, an instrument used to help personnel staffing lookout towers pinpoint the location of wildfires. From left to right, Joe Polaski, John Hecker and Larry Bickel stand in the new Chestnut Ridge tower. 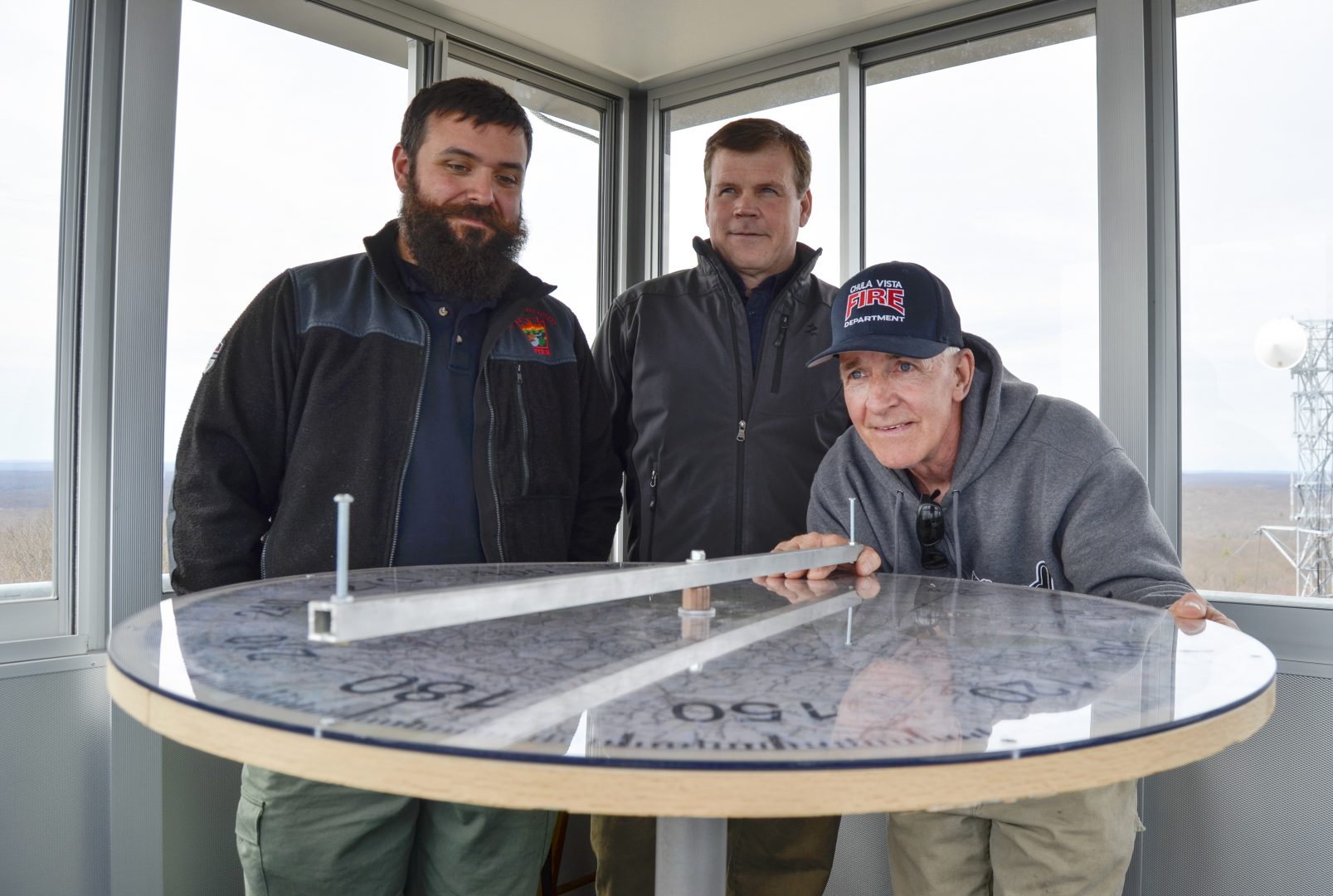 Officials from the Moshannon Forest District gather around the alidade, an instrument used to help personnel staffing lookout towers pinpoint the location of wildfires. From left to right, Joe Polaski, John Hecker and Larry Bickel stand in the new Chestnut Ridge tower.

John Hecker pointed out the window of the truck as it passed oak, maple and birch trees in the Pennsylvania Wilds.

Up ahead was a fork in the road.

“That’s the road we’ll go to, to the new tower,” said Hecker, manager of the Moshannon Forest District, nodding to the right on day in late April. “The old tower is right up here.”

The lookout towers are two miles apart, sticking out high above the treetops. One is brand new, used for the first time this spring along with 15 others across the state.

Pennsylvania doesn’t have massive wildfires like out West, but several hundred smaller ones take place here each year. The state has decided one of the best ways to spot them in places like the Moshannon State Forest is to go old-school.

Larry Bickel, a forest fire warden who retired two years ago from working in the district, drove the truck to the original tower.

The lookout’s iron, pitted by age, has stood through much of Pennsylvania’s conservation history. It’s 98 years old, with its four legs cemented into a grassy hilltop.

“The one over there is cracked, but we have three good ones,” said Larry Bickel, a forest fire warden who retired from the Moshannon district two years ago.

He let out a laugh, then started to climb the wooden steps, which he’s done hundreds of times staffing this tower and others nearby.

Sixty feet up, a hatch opened into a small room. The view of the forest is spectacular, as is the wind that rattles the tower windows.

“This is a soul-searching thing. It’s not for everybody,” Bickel said. “I’ve solved a lot of problems in my life up in this tower.”

Lookouts watch over the ‘Pennsylvania Desert’

Pennsylvania’s landscape changed drastically a century ago, prompting the state to build lookouts to detect wildfires.

“At the turn of the century, this whole area would have been clearcut,” Hecker said.

The lumber was used to build a growing nation, and massive fires tore through what was left behind in the so-called “Pennsylvania Desert.”

Without trees to help retain moisture when it rained, runoff led to major flooding in communities like Harrisburg and Williamsport, Hecker said.

“If you could keep fire off the landscape, trees would come back,” he said.

They did come back as the state learned how to manage wildfires. Towers were key to detecting fires early and keeping them small. 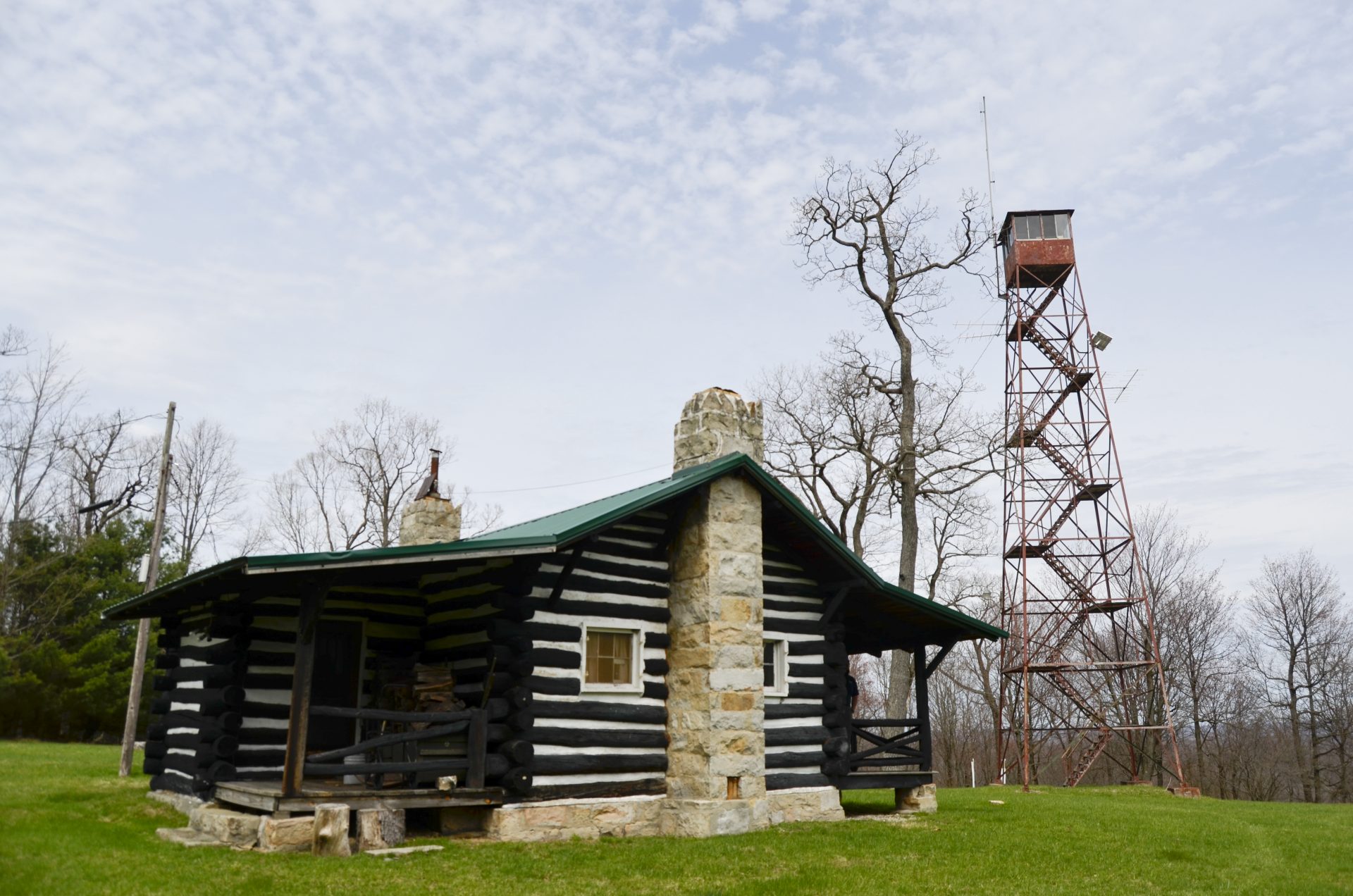 The 98-year-old Knobs tower in the Moshannon Forest District is no longer in use. It’s still standing alongside a cabin where spotters once slept between shifts.

“The roads we came in on today were maybe there, but they were small trails back then,” said Joe Polaski, fire forester for Moshannon. “We didn’t have things like aircraft to keep fires small. They had a lot less resources and access to the fires.”

Today, a hardwood forest covers the area. Most branches, like on this spring day, will stay bare until mid- to late-May.

“You can see how the clouds have broken here and the sunlight’s coming down,” Polaski said. “The trees don’t have leaves on them yet, so you can see how everything would dry out.”

By the end of spring, leaves will block the sun from reaching the brush underneath and the ground will stay wet after it rains, helping to prevent fires from starting and bringing an end to the fire season.

This spring marks the first fire season for the 16 new towers built in Pennsylvania last year.

Gary Weber, treasurer of the national Forest Fire Lookout Association, was surprised by the project.

Over the past few decades, Weber has seen many states end their lookout programs. Pennsylvania is the only state recently to build new towers on such a scale.

“Nationwide, we figure there were somewhere over 9,000 lookout structures built along the way and probably a little over 2,500 actually left standing, but a lot of those are just abandoned,” Weber said.

He estimates 500 are still staffed, as states turn to other methods of fire detection like planes, cameras and citizen reports from cell phones.

“There are a lot of places where if people see smoke, they will get 10 calls to the 9-1-1 center,” said Mike Kern chief of the division of forest fire protection for the state Department of Conservation and Natural Resources, which oversees the forest districts. “There’s other places in north-central Pennsylvania especially where no one will see a fire for a couple hours.”

Even if someone wanted to report a fire, they’d have a hard time finding cell service in the Pennsylvania Wilds. That’s one of the reasons why five of the new towers are in the Moshannon Forest District. 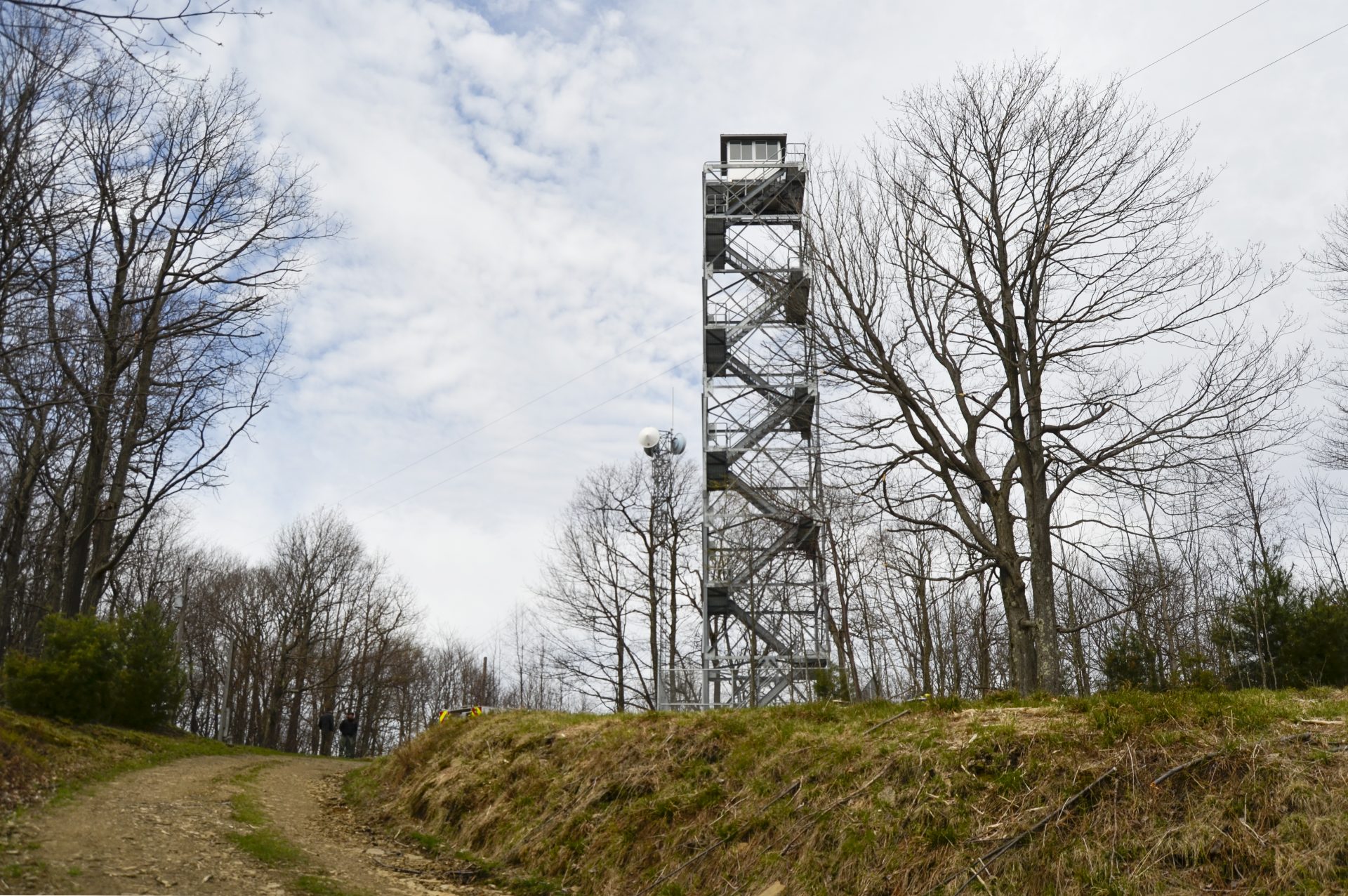 Hecker said the alternative is paying upwards of $1,000 per hour for a plane to search for fires.

“Our towers always spot the smoke quicker,” he said. “Just a little tiny column of smoke comes up, and they’re looking at that against the blue of the horizon and they can spot that.”

Most of Pennsylvania’s new lookouts replaced aging ones at the same location. The forest districts staff about two dozen towers statewide on warm, dry, windy days in the spring, as well as in the fall when fires tend to pop up again.

Humans cause most of the state’s fires, which often remain small, though in 2016 more than 8,000 acres burned in the Poconos.

Kern said the $4-million-plus price tag for the new towers is worth it if it means catching fires early.

“If we have one big fire, we could spend $1 million or $2 million to put it out,” he said. “If you look at it that way, you can recoup the cost of a tower pretty easily if you can prevent those fires from getting large.”

The Moshannon district is no longer using that 98-year-old tower now that a new one has gone up on Chestnut Ridge nearby, with a clearer view to the north.

Bickel, who spent much of his career in the old towers, was blown away when he walked in for the first time.

“This is much better,” he said, standing in the room at the top. “You can get an idea of where the valleys are, where the rivers are, you can see where the river flows.”

He grabbed a pair of binoculars and started scanning for smoke.

The personnel staffing each tower rely on a round table in the center of the room with a map showing the surrounding area. A metal bar spins around the table, with screws sticking up from both ends. When there’s a fire, the spotter lines up the screws with the smoke, then checks the markings on the map to call it in with a degree measurement and distance estimate.

Back in the forest district office, one of the dispatchers like Kay Robison then gets to work.

“If there is another tower that might be able to see the fire, then we will contact them to see if they’re seeing any smoke to cross the hairs to stop the fire quicker,” she said.

With at least two towers feeding her information, she can begin to triangulate the smoke’s location to direct firefighters on the ground to the flames. She’ll dispatch forest district employees, but DCNR also works with a lot of volunteer fire departments, and sometimes they’re closer to the action and can get there first. The department relies on planes too, which dump water and fire retardant to knock down a blaze. 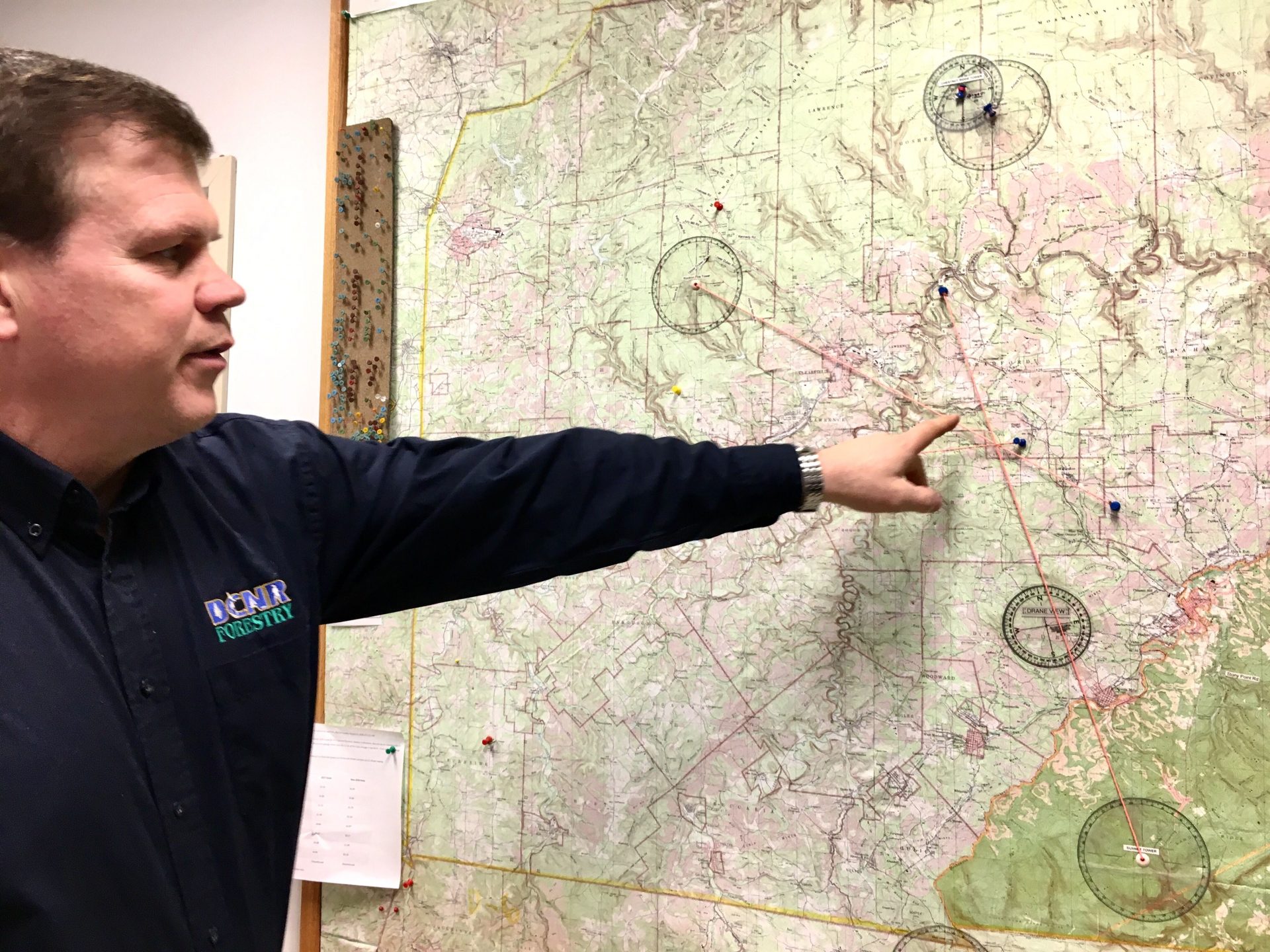 John Hecker, manager of the Moshannon Forest District, points to the fire map. When lookout operators call in a fire, dispatchers walk over to the map to help triangulate its location.

Bickel recalled one particularly hectic day five years ago when he was on the ground helping to direct the response to 11 fires that had broken out.

It was all hands on deck.

“I was asking state parks rangers to chase smoke for me,” he said.

This year is much calmer thanks to abundant rain. Moshannon has only staffed its new towers a few days. Statewide, just 500 acres have burned, compared the usual 3,000 by the start of May.

A DCNR report suggests climate change could result in more wildfires, though that hasn’t happened so far.

Regardless, the new towers will be here for years to come, their spotters climbing down as the sun sets to get some sleep before keeping watch over the forest again the next day.