Rep. Mehaffie talks up his nuclear bailout bill; opponents line up to trash it 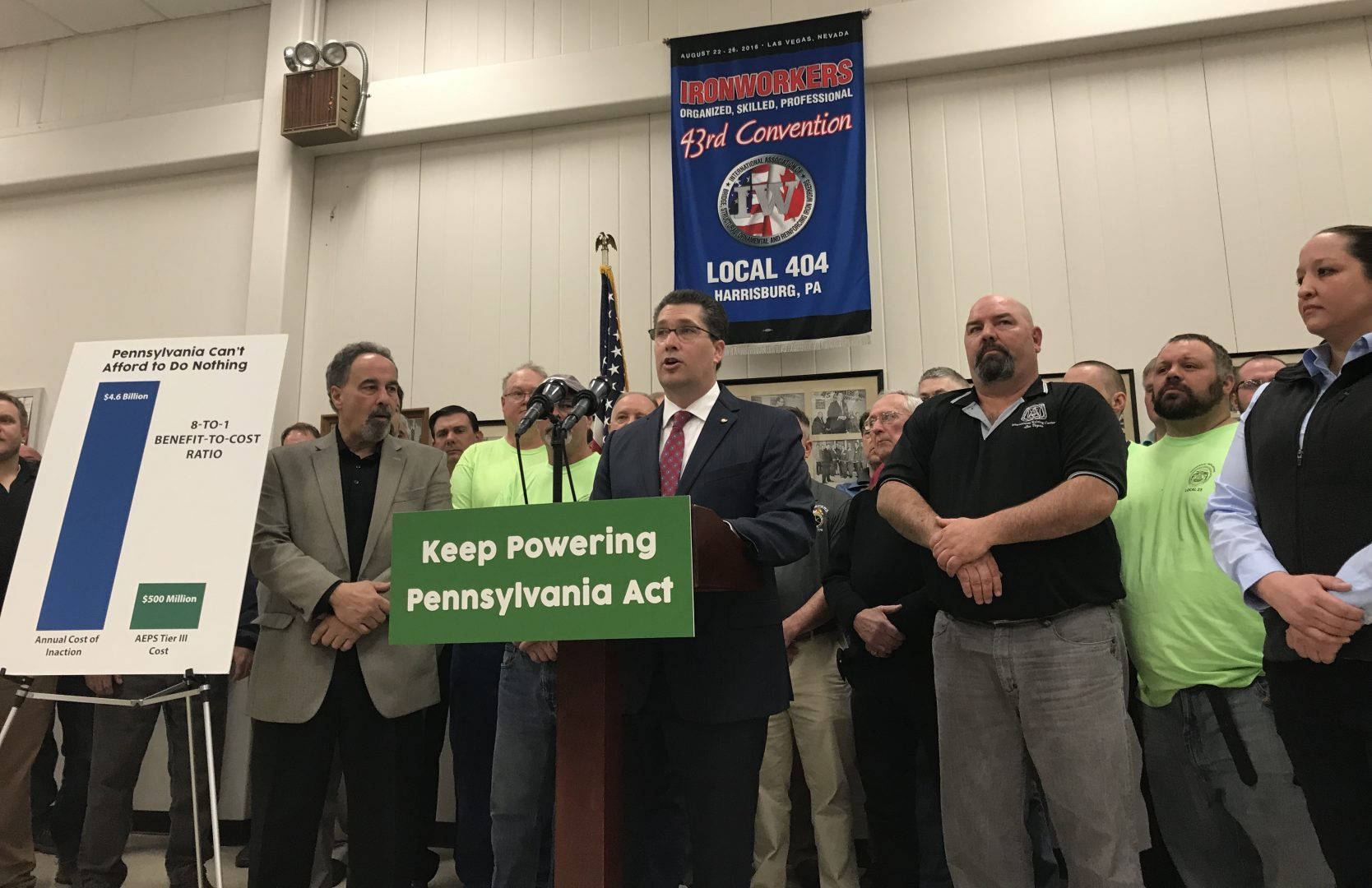 Pennsylvania Rep. Thomas Mehaffie (R-Dauphin) on Monday introduced a bill aimed at keeping two of the state’s five nuclear plants from retiring early. Opponents quickly criticized the measure as too expensive and said it squanders an opportunity to fully address climate change.

A 2004 law, known as the Alternative Energy Portfolio Standard (AEPS), requires electric companies to buy part of their power from clean and alternative sources—like wind and solar. Right now, the list does not include nuclear power plants. Mehaffie wants to change that.

He said amending the AEPS could prevent the closure of Exelon’s Three Mile Island plant outside Harrisburg, and FirstEnergy’s Beaver Valley plant near Pittsburgh. Both are slated for retirement within the next few years, as nuclear has struggled amid flatlining demand for electricity, high operating costs, and competition from natural gas and renewables.

Mehaffie said House Bill 11 is both an effort to combat climate change and to keep the state’s nuclear plants online, which account for 93 percent of the state’s carbon-free power.

“If we lose one or more of these plants we might as well forget about all the time and money we’ve invested in wind and solar,” he told reporters at a news conference Monday. “The Legislature can save Pennsylvania consumers money, keep our nuclear power plants open and keep our air clean.”

Mehaffie puts the price tag of his nuclear bailout at $500 million annually, arguing that’s cheaper than doing nothing, which he said would cost electric customers $4.6 billion a year. He cited an economic analysis by the Brattle Group, which includes all five of the state’s plants, even though only two are scheduled to close early. An analysis circulated by Pennsylvania Public Utility Commissioner Andrew Place last week suggests Three Mile Island is the only plant in serious economic peril.

Mehaffie’s bill recognizes nuclear plants as zero emission sources and creates new requirements about how electric companies are to purchase power. It adds nuclear to the AEPS — requiring companies to buy 50 percent of their electricity from a newly-created “tier 3” list of sources: nuclear, solar, wind, low-impact hydropower and geothermal.

Pennsylvania’s Alternative Energy Portfolio Standard contains two tiers. By 2021, companies have to purchase eight percent of their overall power from so-called “tier 1” renewable energy sources — a list including wind farms, low-impact hydroelectric plants, and methane converted from landfills. A second tier of energy sources – including converted coal waste and larger hydroelectric projects – are to make up 10 percent of energy purchases by the end of the timeline. Solar power is in its own category and tops out at half a percent.

Although the newly-created tier 3 credits appear helpful to renewable energy, the bill includes qualifying language that many observers believe will limit its utility to nuclear plants alone.

For example, an analysis by the Kleinman Center for Energy Policy at the University of Pennsylvania said the new 50 percent tier 3 requirement is roughly equivalent to the annual output of the state’s nuclear fleet. The bill also prohibits energy resources that have received tax exemptions, payments, credits and other incentives from another state from participating — potentially barring out-of-state renewables that may still help to keep Pennsylvania’s air cleaner.

The bill faces strong opposition from the natural gas industry, as well as industrial and consumer groups, including the AARP, who argue it’s going to be too expensive. Citizens Against Nuclear Bailouts, a gas industry-funded group, decried the bill as a corporate giveaway.

“The lead sponsor of this bill has confirmed a price tag of at least an additional $500 million, year after year, indefinitely, in higher electricity costs, hurting Pennsylvania’s most vulnerable citizens, including seniors and those on low or fixed incomes, as well as small businesses and manufacturers,” the group said in a statement.

Likewise, a coalition of Pennsylvania environmental organizations denounced the bill, saying it does nothing to enhance the development of renewable energy sources.

“This bill is nothing more than a windfall for aging, uneconomical nuclear power plants. It fails to limit carbon pollution or advance commonsense energy policy that transitions Pennsylvania away from nuclear power and dirty fossil fuels to renewable sources and energy efficiency,” said Mark Szybist, with the Natural Resources Defense Council. “Moving this myopic bill forward would be a reckless failure of leadership, hinder meaningful job creation, and squander the opportunity to put Pennsylvania on track toward a clean energy future.”

J.J. Abbott, a spokesman for Gov. Tom Wolf, said he will review the bill and acknowledges the impact the nuclear closures will have on workers, as well as on the plants’ contributions to preventing greenhouse gas emissions.

“Any solution to ensure the sustainability of nuclear facilities should have a fair cost-benefit ratio for consumers and be based on full transparency from operators seeking assistance,” Abbott wrote in an email.

Mehaffie had said he and Sen. Ryan Aument (R-Lancaster) would introduce companion bills at the same time, but only the House bill was put forward Monday morning. In an email, Aument said he applauds Mehaffie’s leadership on the issue but his focus remains on finalizing the Senate proposal.

House Majority Leader Bryan Cutler (R- Lancaster) has not taken a firm position on the bill yet, according to his spokesman Mike Straub. In an emailed statement, Cutler called nuclear energy a “complicated issue” and said the proposal deserves serious consideration.

“I look forward to working with my colleagues on both sides of the aisle to reach a consensus that is in the best interest of all Pennsylvanians,” he said.