In this Aug. 1, 2018 photo shown on the former grounds of Naval Air Warfare Center Warminster is the Ann's Choice Retirement Community and the Warminster Community Park in Warminster, Pa. In Warminster and surrounding towns in eastern Pennsylvania, and at other sites around the United States, the foams once used routinely in firefighting training at military bases contained per-and polyfluoroalkyl substances, or PFAS. EPA testing between 2013 and 2015 found significant amounts of PFAS in public water supplies in 33 U.S. states.

Pa. to begin its own process of setting health limit for two PFAS chemicals 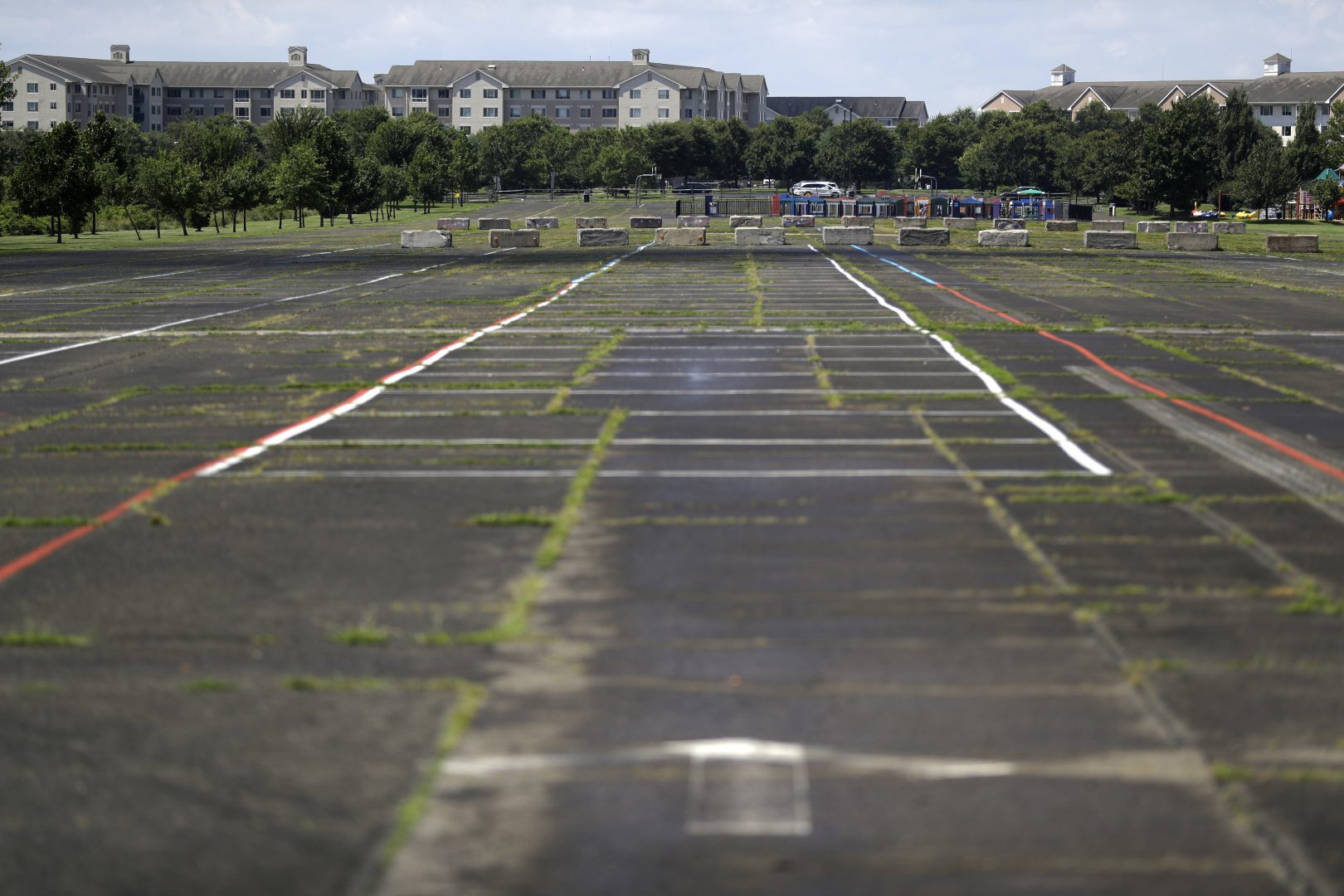 In this Aug. 1, 2018 photo shown on the former grounds of Naval Air Warfare Center Warminster is the Ann's Choice Retirement Community and the Warminster Community Park in Warminster, Pa. In Warminster and surrounding towns in eastern Pennsylvania, and at other sites around the United States, the foams once used routinely in firefighting training at military bases contained per-and polyfluoroalkyl substances, or PFAS. EPA testing between 2013 and 2015 found significant amounts of PFAS in public water supplies in 33 U.S. states.

Pennsylvania will begin the process of setting its own health limits for two toxic PFAS chemicals because it’s unclear when the federal government will set national standards, the Department of Environmental Protection said late Thursday.

Responding to Thursday’s announcement by the U.S. Environmental Protection Agency that it will begin the process of setting maximum contaminant limits (MCLs) for PFOA and PFOS this year, the DEP committed for the first time to laying the groundwork for a statewide standard for the chemicals.

“Pennsylvania will begin the process to set an MCL for PFOS and PFOA,” DEP spokesman Neil Shader wrote in an email. “To that end, the Department of Environmental Protection will be moving forward with a Request for Proposals to hire a consulting toxicologist to evaluate existing health studies with the ultimate goal of establishing a protective MCL for the state.”

The email welcomed what it called the EPA’s “first steps” toward setting a federal health limit but said Pennsylvania would move ahead with establishing its own MCL because “the people of Pennsylvania cannot wait on the federal government.”

Although the administration of Democratic Gov. Tom Wolf set up an “Action Team” of state officials to respond to PFAS contamination last September, it did not say then that setting a MCL would be part of the team’s mandate, and has not publicly set that goal until now.

Advocates for stricter limits on PFAS chemicals in drinking water say that MCLs are essential to protecting public health, and have questioned why Wolf’s team did not name the establishment of those limits as its primary goal.

Critics of the EPA plan said it offered no immediate way of cleaning up contaminated water supplies, and represents another delay from an agency that has been widely criticized for failing to set enforceable national health limits for the chemicals.

In Pennsylvania, the new plan includes obtaining laboratory equipment and training personnel in order to do in-house testing for PFAS chemicals, the DEP said. It will also finalize a sampling plan in coming weeks, and plans to begin monitoring “other” water systems for contamination in May or June.

The DEP previously said it was monitoring 20 sites around the state for PFAS contamination.

Shader said officials have not decided what Pennsylvania’s MCL level might be but said it was likely to be lower than the EPA’s current health advisory limit of 70 parts per trillion. DEP is legally required to base a recommended MCL on “sound science” and to reach that conclusion independently of any other state or federal agency, he said.

Although DEP will take into account the PFAS science that has been developed by New Jersey and other state and federal bodies, it must make recommendations based on its own research, Shader said.

Like any other regulation, a MCL will have to be approved by a state commission that evaluates the plan’s impact on the economy, public health, and small businesses, and conducts a cost-benefit analysis of the proposed rule.

Despite the many regulatory requirements, DEP believes it can set a state MCL quicker than the EPA would approve any federal standard, “if in fact EPA does decide to set an MCL,” Shader said.

Asked why the Wolf administration had decided to launch its own MCL process, Shader said that after the EPA’s announcement, there was enough uncertainty about the federal outcome to justify Pennsylvania setting an independent standard.

“PA had been waiting to see whether the federal action plan would commit to setting an MCL,” he said.  “We had been planning for the eventuality that EPA would not make that commitment.  While we appreciate EPA beginning to move forward with the determination process, we believe there is enough evidence that an MCL should be set and worry about the uncertainty and timeframe of EPA’s process.”

PFAS chemicals including PFOA and PFOS were once used in consumer products like nonstick cookware and flame-retardant fabrics. They are no longer made or used in the U.S. but persist in public and private water systems as well as soil in some places because they don’t break down in the environment. The EPA says the chemicals are linked to some forms of cancer and other illnesses including elevated cholesterol, low birth weights, and thyroid problems.

In Pennsylvania, concern has focused on the Horsham/Warrington/Warminster area of Bucks and Montgomery Counties where high PFAS levels have been found in public and private water systems near two former military bases that used the chemicals in firefighting foam for decades. Although some towns there have now removed PFAS chemicals from public water supplies, the bases remain a source of contamination, threatening to taint local ground water.

In January, a New Jersey landfill canceled an agreement to take 4,500 tons of PFAS-contaminated soil from the Willow Grove base at Horsham where the Navy is trying to remove the most polluted soil.

Growing evidence of the PFAS risk to public health and the EPA’s longstanding failure to set national MCLs has prompted some states including New Jersey to set their own limits that are much stricter than the EPA’s health advisory level.

Delaware Riverkeeper Network, a Pennsylvania-based environmental group that has long campaigned for the state to set strict MCLs for PFAS chemicals, welcomed the DEP’s statement but said it will keep pressing DEP to ensure it actually sets a limit.

“It is good news to finally hear that PA DEP is saying they are ‘beginning the process’ but we have heard promises before without results,” said DRN’s deputy director, Tracy Carluccio. “We will be watchdogging the next steps by PA DEP.”

She said DRN petitioned Pennsylvania’s Environmental Quality Board in May 2017 to set an MCL for PFOA, and the petition was accepted but no MCL was set.

Mark Cuker, an environmental attorney, and member of the grassroots group Buxmont Coalition for Safer Water, says Pennsylvania should act quickly by consulting the science produced by New Jersey’s Drinking Water Quality Institute, a panel of scientists that advises the state’s DEP. The DWQI recommended much lower safety standards for PFOA and PFOS — 14 ppt and 13 ppt, respectively, than the EPA’s current advisory of 70 parts per trillion.

Cuker says there’s no reason to reinvent the wheel.

State Sen. Maria Collett (D-Bucks and Montgomery) welcomed the state’s PFAS plan but said she would continue to promote her two bills that would set an MCL for some of the chemicals and declare them a hazardous substances.

“I am very excited to hear that the DEP is beginning the process of setting an MCL for PFOS and PFOA,” she said. “The health and safety of our residents remains at risk. We must act swiftly to protect them.”

“I welcome any action taken by the Pennsylvania state government to work with us in ending this public health crisis.  Both the federal and state government, in addition to local municipalities, all have a role to play and we should all be moving aggressively to ensure safe, clean drinking water for the people we serve,” he said.

Fitzpatrick said he will be urging Senate leaders to ensure that PFAS regulation is a central issue in the nominating process for EPA Acting Administrator Andrew Wheeler to be confirmed as the agency’s head.