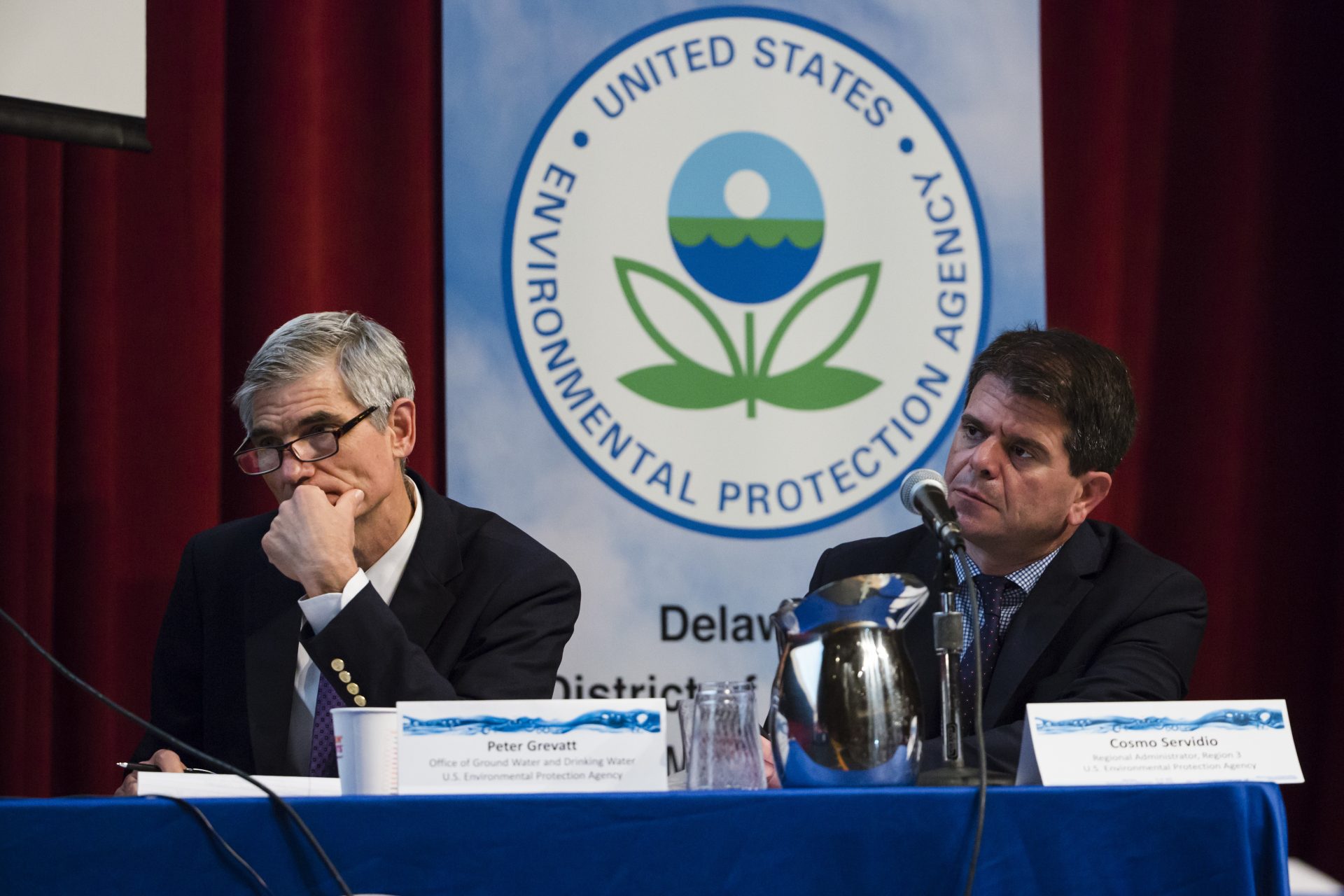 In this July 25, 2018 photo US Environmental Protection Agency’s Peter Grevatt, Director of the Office of Ground Water and Drinking Water and Cosmo Servidio, Regional Administrator for the Mid-Atlantic Region, listen to members of the public comment during a PFAS Community Stakeholder Meeting, on in Horsham, Pa. In Horsham and surrounding towns in eastern Pennsylvania, and at other sites around the United States, the foams once used routinely in firefighting training at military bases contained per-and polyfluoroalkyl substances, or PFAS. EPA testing between 2013 and 2015 found significant amounts of PFAS in public water supplies in 33 U.S. states. (AP Photo/Matt Rourke)

The New Jersey Department of Environmental Protection has taken a step toward cleaning up water contamination from an unregulated class of perfluorinated chemicals known as PFAS.

The toxic chemical is used in the manufacture of non-stick cookware, stain resistant clothing and firefighting foam. Although those types of “contaminants of emerging concern” are not regulated by state or federal authorities, research has begun to link exposure to cancer and other illnesses.

Without federal or state regulations, groundwater polluted with dangerous levels of PFAS is not considered “contaminated,” according to New Jersey DEP spokesman Lawrence Hajna. Over time, groundwater contamination can impact the aquifers that supply drinking water. The DEP proposal would trigger remediation efforts if groundwater contained more than 10 parts per trillion for the chemicals, which include PFOA and PFOS.

“A growing body of studies suggest that PFOA, PFAS and other types of related chemicals may impact our liver and immune system function, may increase blood cholesterol levels, and cause delays in the growth and development of fetuses and infants,” he said.

Hajna said New Jersey was the first state to start testing for the chemicals in drinking and groundwater sources. EPA tests from 2013-2015 found PFOS in 3.4 percent of New Jersey’s public water systems, which is close to twice the national rate of 1.9 percent.

The New Jersey Drinking Water Quality Institute, which advises DEP, has recommended maximum contaminant levels for PFOA at 14 parts per trillion, and 13 ppt for PFOS.

Hajna said Gloucester and Salem counties have a number of sites with elevated levels of PFAS. The chemicals don’t break down readily, and so can remain in the body years after consumption.

“Even at very microscopic, minute levels, these chemicals can accumulate in our bodies and cause health problems down the road,” Hajna said.

New Jersey was the first state to put in place maximum contaminant levels for one of the chemicals, PFNA, in 2018, which allows the state to enforce the standards. But environmental activists say the state is now dragging its feet on implementing regulation for the other related chemicals.

“It has to go through a number of legally required steps. We can’t tell how long it’s going to take, but having the groundwater rules in place now is an important step for the interim.”

Pennsylvania has just begun to study the issue, but does not regulate PFAS.

Nor does the federal government. The shutdown has delayed release of an EPA proposal to regulate the chemicals, which the agency had planned to release at the end of 2018.

New Jersey’s DEP will be taking public comment on the groundwater proposal through February 19.