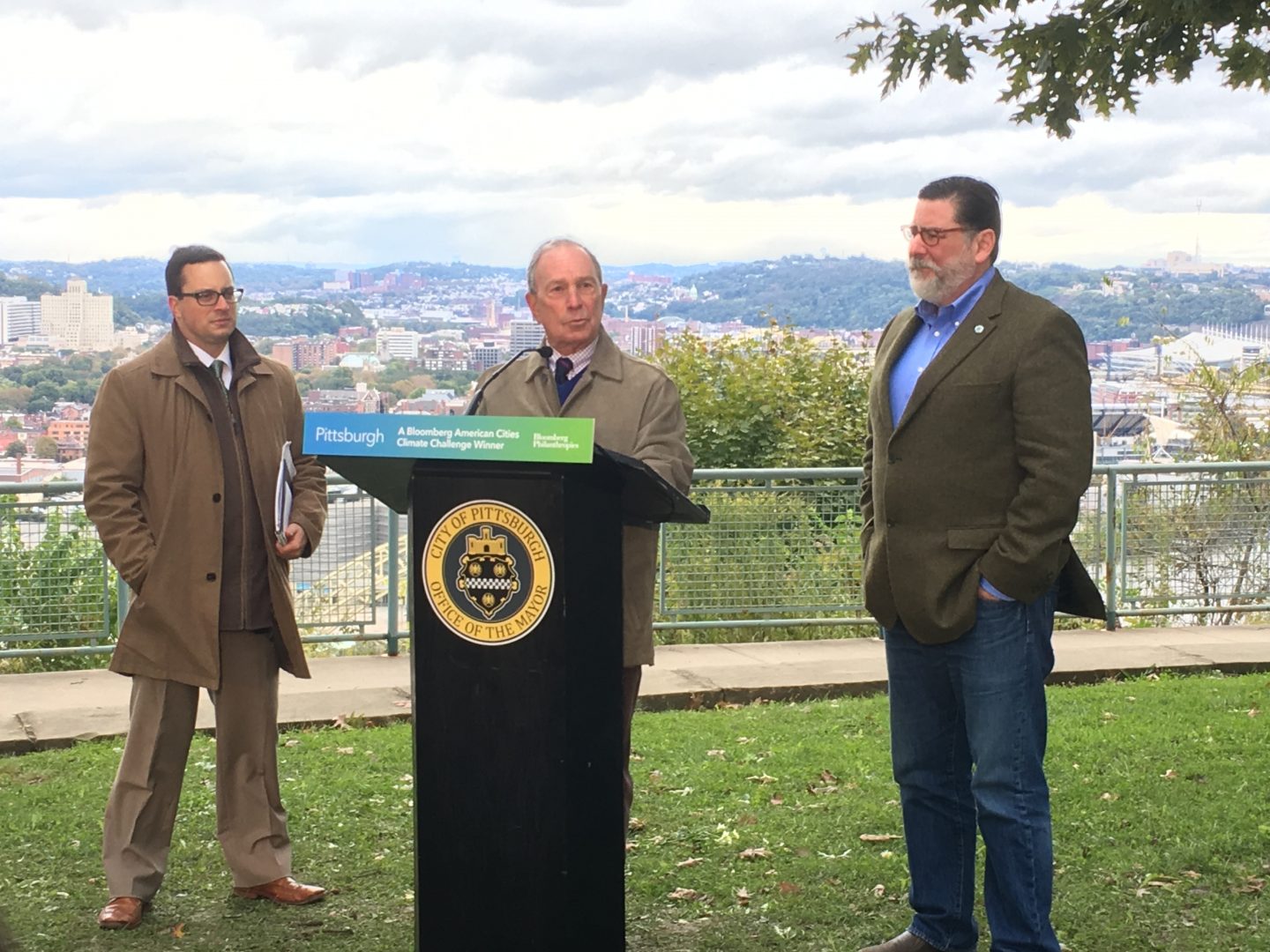 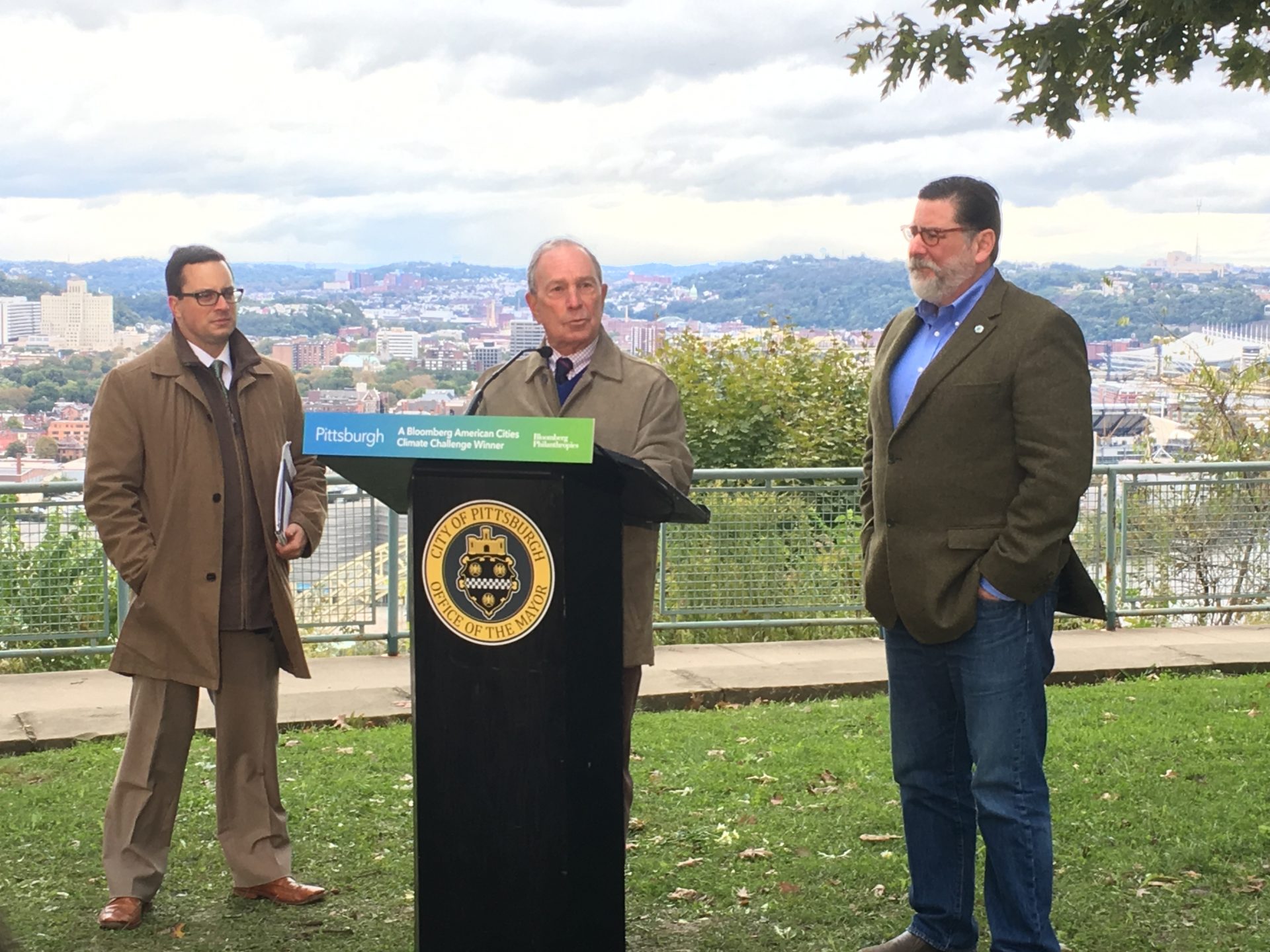 Michael Bloomberg, the former mayor of New York who’s weighing a presidential bid in 2020, visited Pittsburgh and Philadelphia on Sunday to announce that both cities will receive up to $2.5 million to combat climate change.

Bloomberg Philanthropies named the cities winners of its American Cities Climate Challenge. The foundation plans to announce 20 winners in total.

“We were looking for cities not only with ambitious goals, but also realistic plans for reaching them, and strong mayoral leadership to get jobs done,” Bloomberg said during his stop in Pittsburgh.

Pittsburgh’s city council earlier this year gave the green light to an ambitious “climate action plan” that calls for renewable electricity to power all city government operations by 2030, as well as a 50 percent reduction in energy and water usage citywide.

Mayor Bill Peduto said climate change has become an urgent issue in Pittsburgh, as heavy rains this year led to flooding and landslides. He added, however, that the city has made significant progress in tackling air and water quality problems stemming from past industrial activity.

“Although we have a long way to still go, we have been able to show the rest of the country and the world how a city that had basically destroyed its environment can come back and succeed economically at the same time,” he said.

Bloomberg Philanthropies selected Philadelphia “because of their innovative and ambitious climate action plans to reduce air pollution and city-wide emissions with specific projects aimed at reforming their respective transit and buildings sectors, areas which are typically responsible for 80 percent total of all citywide emissions and over which mayors have significant authority,” according to a statement from the city.

“We’re going to be using it to scale up our climate action,” said Christine Knapp, the city’s director of sustainability. “The focus is on reducing carbon emission from buildings and from transportation, which are our two major sources of our carbon footprint.”

Bloomberg said his foundation invited the 100 largest American cities to participate in the climate challenge.

“The response could not have been more positive,” he said. “Cities all over the country, with both Democratic and Republican mayors, submitted applications.”

The foundation has named nine winners so far in addition to Pittsburgh and Philadelphia: Atlanta, Boston, Los Angeles,  Philadelphia, Portland, Ore., San Diego, San Jose, Seattle and Washington, D.C. Over two years, the cities will work with a representative from Bloomberg Philanthropies to implement their climate goals.

Bloomberg praised cities, states and businesses for being at the forefront of the battle against climate change and called on Congress to step up.

“Republicans in Washington have buried their heads in the sand on this issue, and many others, too,” he said. “So, I’ve decided to spend a lot of money helping Democrats win control of the House and the Senate.”

Bloomberg told the New York Times in September that he is considering running for president, an idea he has entertained in past elections. He recently registered as a Democrat – again – after stints as a Republican and an independent.

At Sunday’s event in Pittsburgh, he declined to answer whether he will run, saying he’s focused on helping Democrats in the upcoming midterm elections.

Watch this week: The story of environmental rights in Pennsylvania