A 'mock' well pad in Tiadaghton State Forest, where the PA Department of Conservation and Natural Resources is testing restoration techniques.

Bringing the forest back after shale gas 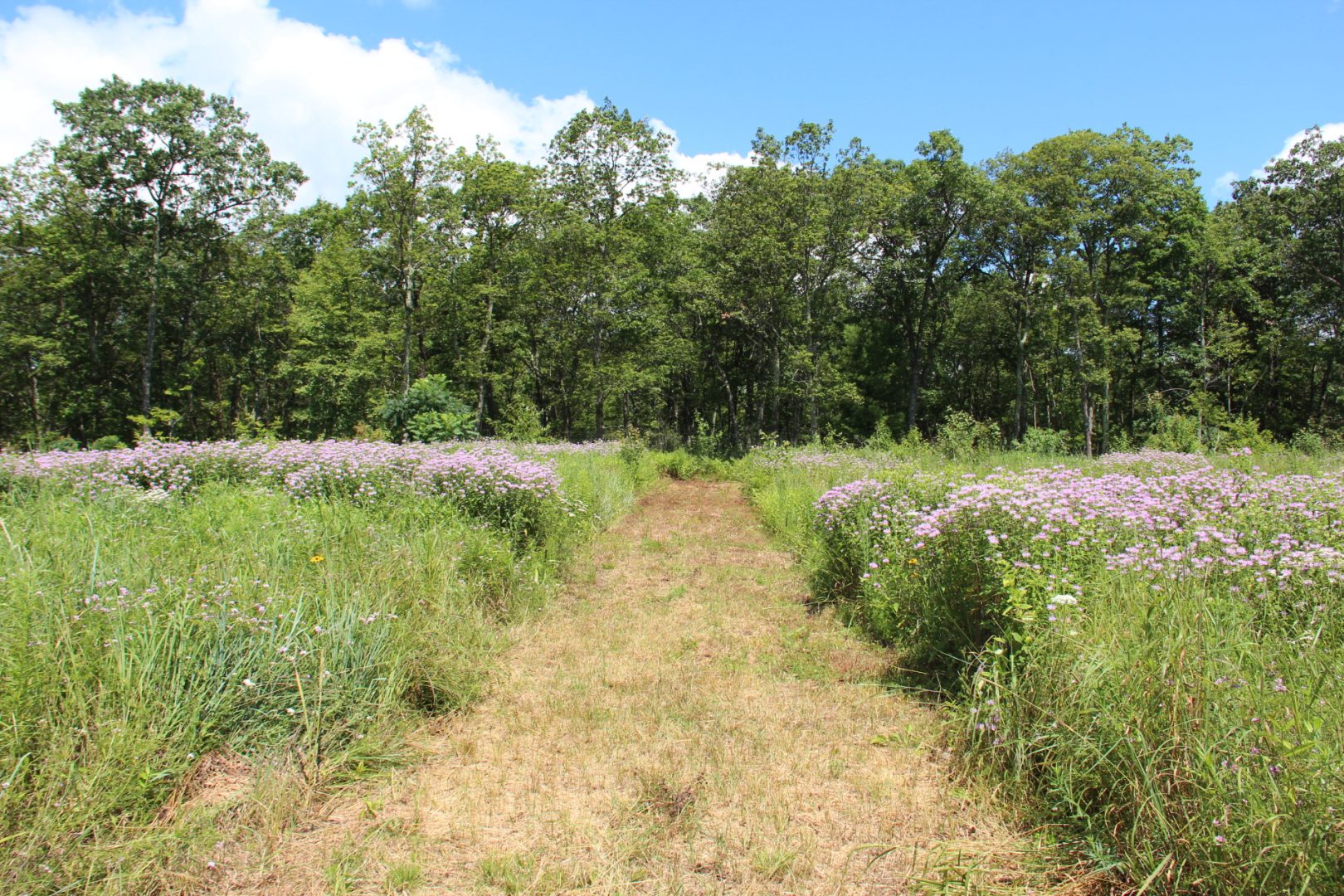 A 'mock' well pad in Tiadaghton State Forest, where the PA Department of Conservation and Natural Resources is testing restoration techniques.

LISTEN: “Bringing the Forest Back After Shale Gas”

In a clearing deep in Tiadaghton State Forest, Kelly Sitch stops to look at a clump of wild bergamot, a native plant whose light purple flowers resemble pom-poms.

Bumblebees hover over the flowers on a warm summer morning, which is a good sign for Sitch. He planted the flowers here several years ago, on top of what had been a storage lot used by fracking companies operating in the forest.

“This is only a 13-by-13 foot square, but to a bumblebee this is a fantastic ecosystem right here,” Sitch says.

The clearing is a kind of outdoor laboratory. Sitch, an ecologist with the Pennsylvania Department of Conservation and Natural Resources, and other researchers are studying ways to revive forest habitat lost to shale gas drilling on state-owned forests.

Fracking has eaten up nearly 1,800 acres of state forest in Pennsylvania over the past decade — wiping out critical habitat for native species and creating corridors for invasive species to thrive. It’s also reduced the amount of core forest–contiguous parcels that are more than 500 acres in size–by 15,000 acres.

Sitch and his collaborators are testing how best to revive areas cleared for fracking on this site–a mock well-pad. They’ve divided the clearing into dozens of small plots, each planted with different species.

DCNR manages 2.2 million acres of state forest, including 1.5 million acres above the gas-rich Marcellus shale formation. The agency has leased more than 100,000 acres of this land to gas companies for fracking in the Marcellus shale. Here in the Tiadaghton, the industry has cut down around 1,000 acres of forest to make way for well pads, pipelines, and compressor stations. Sitch says most of this land won’t be grown back as forests, at least not for decades.

“But there’s a lot of areas around the edge of the well pad that have been cleared or perhaps areas that were used to store water trucks or fracking equipment that’s no longer necessary when it’s just in production,” he says. 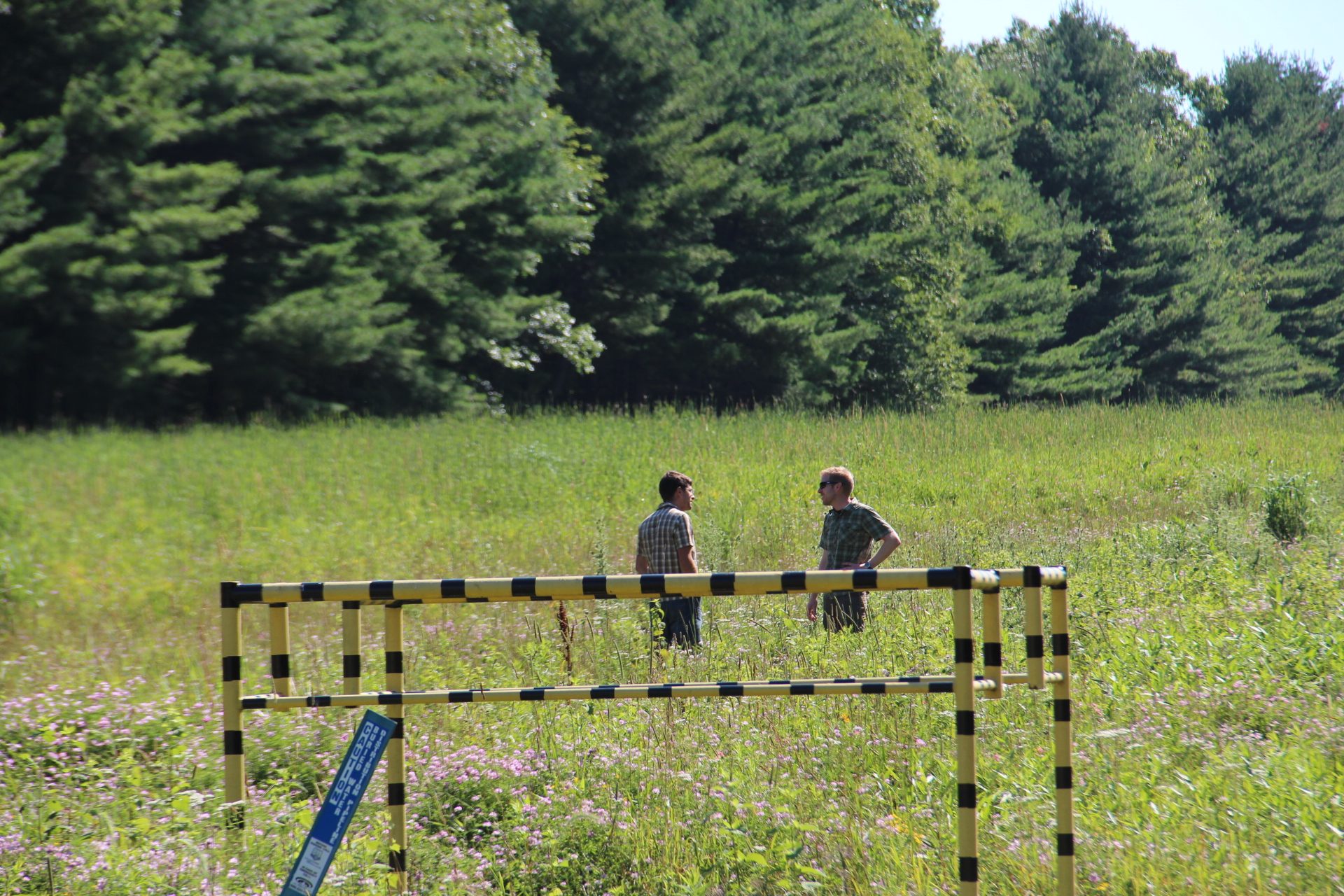 DCNR forester Ben Gamble, left, and Kelly Sitch, an ecologist for the agency, on a pipeline right-of-way in the Tiadaghton State Forest. Photo: Reid R. Frazier

And it’s these areas, around the edges of gas development, that Sitch and his colleagues, like Patrick Drohan, want to resuscitate. Drohan, a soil scientist at Penn State, says the problem isn’t just that the forest has been cut down. To build a well pad, companies use heavy equipment to compact the ground underneath.

“Most of the time what’s done for these types of operations is a compact (standard) called ‘no movement.’ And that standard is similar (to) when you’re building a parking lot,” he says.

That’s not good for plants. Compacted soil has fewer pores to store water or gases that a plant needs to survive.

So the research group is trying to figure out the best way to undo this process. The team brought a steamroller to the site to compact the ground the way gas companies do when they build their well pads.

They then brought in a bulldozer outfitted with a special attachment to cut into the compacted soil.

They tilled the soil to varying depths, up to 20 inches, to see which depth worked best. One row, at the far end of the plot, has not been loosened at all. Not surprisingly, it’s doing worse than the rows that have been re-tilled, Sitch says.

“That far row is much less drought tolerant than the other three rows and we’re seeing a lot more non-native invasive species that can still tolerate that very dry soil (there),” he says. “A lot of our native species, especially the grasses, are very deeply rooted. So if they can get down through 20 inches of loosened soil they’re going to be able to develop really deep, nice root systems.” 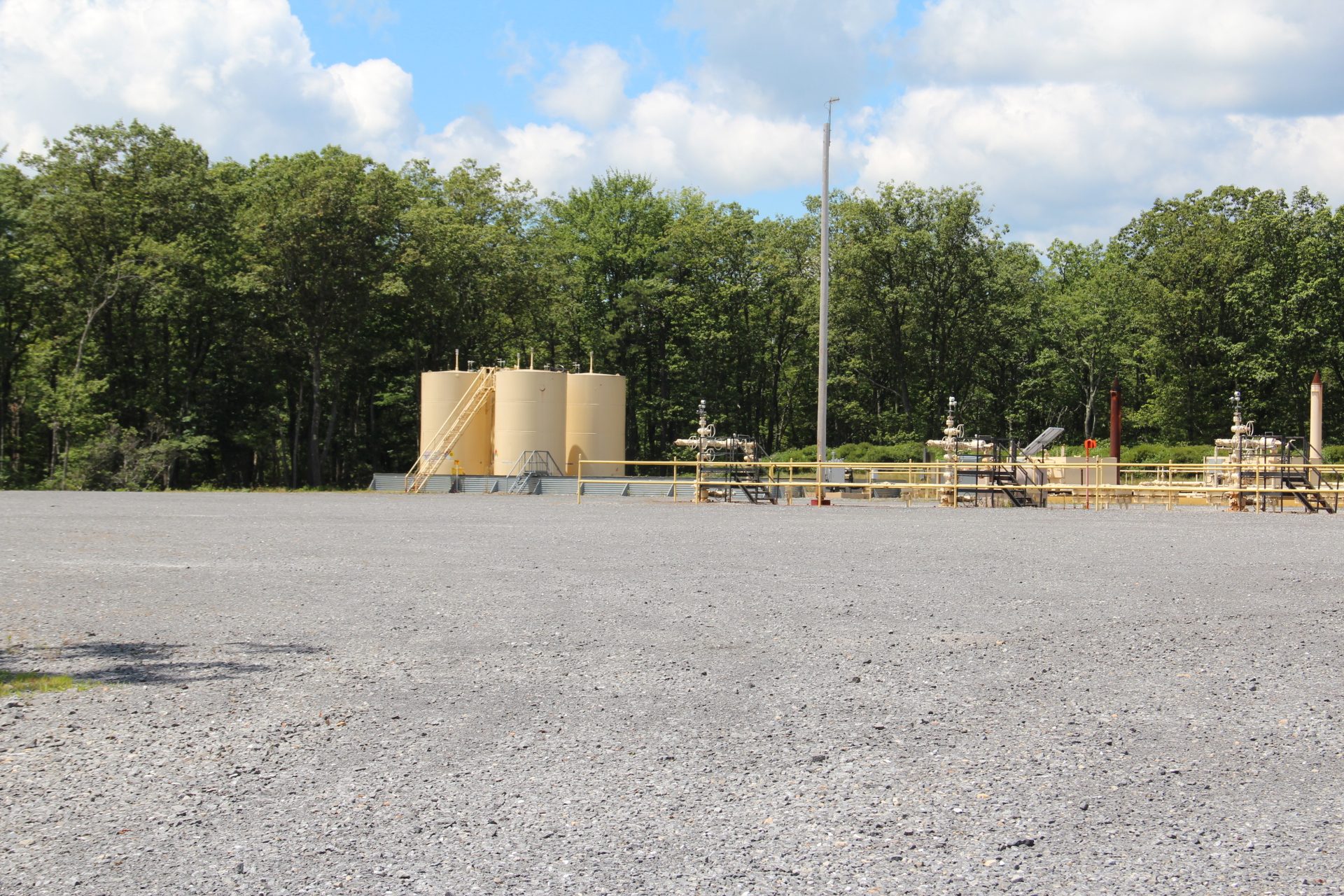 Sitch says the goal is to give gas companies step-by-step directions for repairing and replanting the borders of their well pads, pipelines, and other construction areas. He doesn’t think cost should be a problem for most drilling companies.

“You’re really getting down to almost less than $2,000 dollars an acre,” he says. “When you’re talking about (companies with) multimillion dollar operations over many sites, it’s not really very much of a money commitment.”

“If we’re creating habitat for insects, for songbirds, butterflies and moths, native plants — that’s a great deal of real estate.”

For now, the agency isn’t proposing to make any of these methods mandatory. So far, Sitch says, gas companies have been receptive to the group’s ideas.

Because of a drop in the price of natural gas, fracking operations have been relatively slow in the forest in the last few years, according to Ben Gamble, a natural gas forester for the 150,000-acre Tiadaghton State Forest.

“For maybe two years straight, we’ve had almost nothing,” says Gamble, who is part of the mock well pad study team. 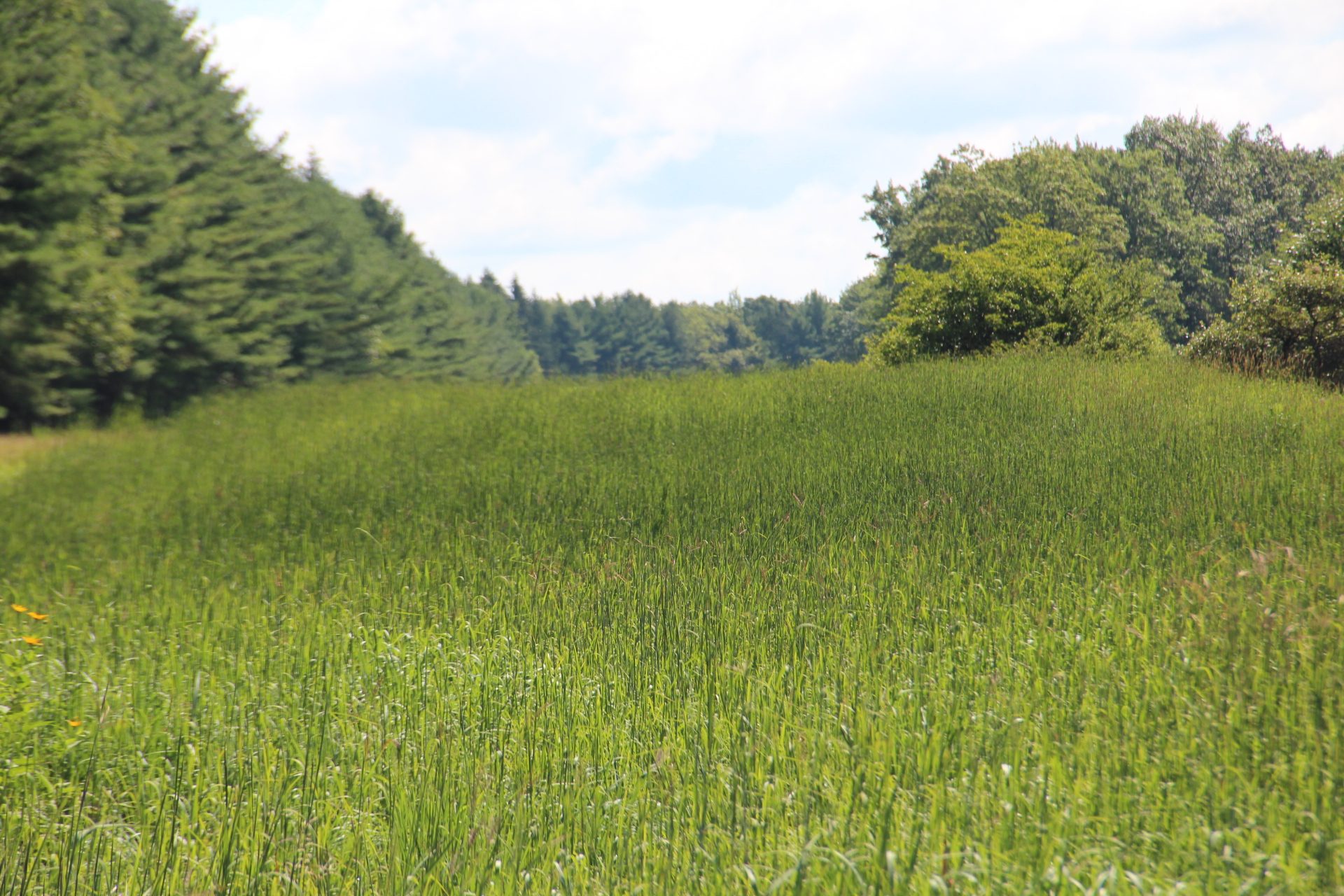 A right of way for a transmission pipeline to carry gas from the Tiadaghton State Forest in Lycoming County to market. Photo: Reid R. Frazier

But with nearly a third of the forest leased to gas companies, he expects drilling rigs to come back if the price of gas goes up.

“We have 19 well pads that have never been drilled or fracked. So those are sitting available for future development,” he says. “We have maybe a few other well pads that weren’t completely drilled. So some of them we would expect, in time, if the economics are right, natural gas operators to come back.”

Even if the companies come back, Gamble thinks there won’t be much more forest disturbance because companies should be able to use existing roads, well pads and pipelines.

Sitch says he hopes once the companies are done with major construction, they can start re-foresting the edges of their development. Even if the number of acres isn’t large, they can add up.

“If you have a six-acre well pad, and after production you really only need three and a half acres –you have potentially two and a half acres there that you can work with,” he says. “Somebody might say, ‘Oh you know, it’s two and a half acres — it isn’t a lot.’ But if we’re creating habitat for insects, for songbirds, butterflies and moths, native plants — that’s a great deal of real estate. Why not get some sort of ecosystem function out of whatever acreage we can?”

Bringing back some of the forest is better than none at all, he says.

CORRECTION: A previous version misstated the amount of acreage of state forest the DCNR manages. It is 2.2 million acres, not 1.5 million acres.