Fishermen share a caught catfish at Pier 60 on the Delaware waterfront, near Tasker Street, in South Philadelphia, PA, on May 12, 2018. (Bastiaan Slabbers/for WHYY)

Fishermen share a caught catfish at Pier 60 on the Delaware waterfront, near Tasker Street, in South Philadelphia, PA, on May 12, 2018. (Bastiaan Slabbers/for WHYY) 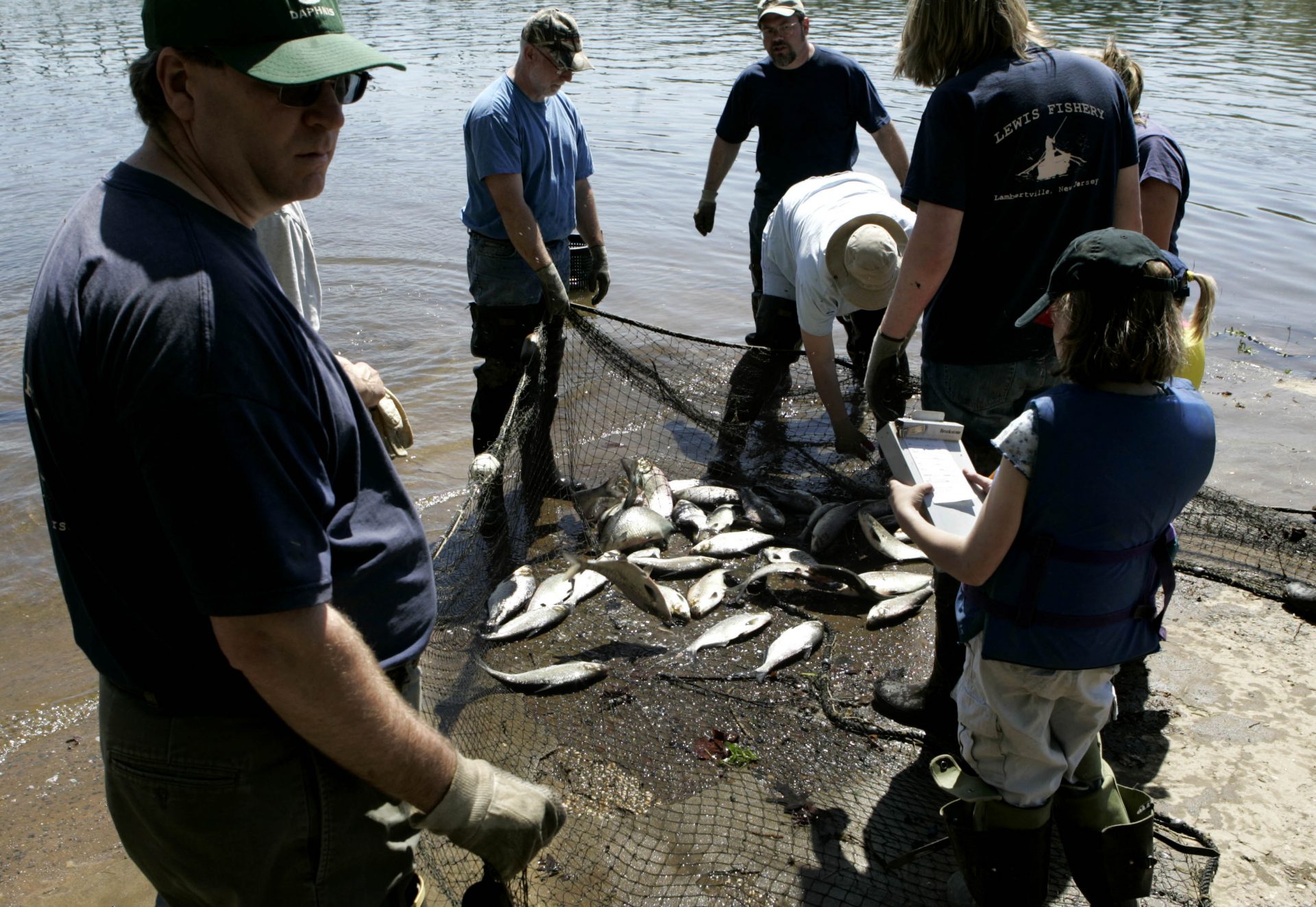 Members of the Lewis Fishery family count and identify fish that were caught in a seine fishing net during the Shad Festival in Lambertville, N.J., Sunday, April 30, 2006. New Jersey Department of Environmental Protection has issued its first PFAS related fish advisories. The family of chemicals is linked to some cancers.

New Jersey issued its first consumption advisories for 12 species of fish that were found to contain chemicals belonging to the PFAS family which is being more tightly regulated by some states because of its potential to harm to human health.

The state’s Department of Environmental Protection said the fish were sampled from 14 water bodies in six counties, and were found to contain different levels of the chemicals, which have been linked to illnesses including some cancers, immune system problems, and high cholesterol.

In a report issued on Thursday, the DEP urged anglers to check the new advisories which provisionally recommend maximum frequencies at which specific fish species caught in those water bodies can be eaten with no adverse effects on health.

For example, largemouth bass at Little Pine Lake at Pemberton in Burlington County should not be eaten more than once a year because samples of the fish there were found to contain the chemical PFOS at 73 parts per billion, or in the range at which only annual consumption is recommended, the DEP’s report said.

The lake is fed by numerous tributaries that are contaminated by PFAS chemicals which have been used in firefighting foam at the nearby Maguire-Dix-Lakehurst military base, the report said. Around the country, PFAS contamination in public and private drinking water sources has been traced to military bases including those at Horsham, Pa. that have used the chemicals in firefighting foam.

Other sources have included nonstick cookware and flame-retardant fabrics. Although PFAS use has been phased out in those and other U.S.-made consumer products, the chemicals are widespread in the environment because they don’t break down, and exist in high concentrations in places where they were used or manufactured.

In New Jersey, some of the highest levels of PFNA, another member of the PFAS family, have been found near Paulsboro where Solvay Specialty Chemicals used the chemical before voluntarily phasing it out in 2010.

On the Passaic River between Dundee Dam and Elmwood Park, bluegill sunfish should not be eaten more than once every three months because of high levels of PFOS while consumption of common carp taken from the same area should be limited to once a month because of contamination by the same chemical, the report said.

Fishermen Dustin and John at Pier 60 on the Delaware waterfront, near Tasker Street, in South Philadelphia, PA, on May 12, 2018. (Bastiaan Slabbers/for WHYY)

“Before going fishing, anglers should take a few minutes to review advisories in place for their favorite fishing spots so they can make good decisions about eating the fish they catch,” said DEP Commissioner Catherine McCabe.

Other PFAS chemicals that prompted consumption advisories in the fish study included PFNA and PFOA.

It echoed other recent studies by states and private advocates indicating that the chemicals are widespread in the environment, and may cause a range of illnesses.

“This initial study indicates the presence of some of these compounds in fish tissue at levels that might impact human health,” the report said.

An advocate for tighter restrictions on PFAS chemicals called the report a landmark study that highlights the pervasiveness of the chemicals.

“This study provides incontrovertible empirical evidence of the enormity of New Jersey’s PFAS pollution problem that demands action by the state to remove these chemicals from drinking water and to clean up the sources of these contaminants,” said Tracy Carluccio, deputy director of the environmental group Delaware Riverkeeper Network.

She urged DEP to hasten its regulation of PFOA and PFOS, and accused it of delaying implementation of recommendations for maximum contaminant levels (MCLs) made by the Drinking Water Quality Institute, a panel of scientific advisers to the NJ DEP.

“DEP has not acted yet on implementing the mandatory MCLs, inexplicably prolonging the exposure of people to drinking water contaminated with the chemicals,” she said.

The report also updated fish-consumption advisories after testing for PCBs, mercury and pesticides. The testing resulted in less restrictive advisories for 36 species, and 10 that became more restrictive.

Data also was collected for species not tested in previous years as well as at one new sample location. The new data resulted in 30 new consumption advisories for the lower Delaware River watershed region.

The PFAS study follows recent work by the DEP and its Drinking Water Quality Institute to set some of the nation’s strictest limits on the presence of three PFAS chemicals – PFNA, PFOA and PFOS – in drinking water. The state is in the process of implementing the panel’s recommendations on curbing the chemicals, and will be able to require public and private water systems to comply with those limits when regulations are in place.

By contrast, the U.S. Environmental Protection Agency does not regulate the chemicals, but issues only health advisories that New Jersey and some other states see as too lax to protect public health. Former EPA Administrator Scott Pruitt said in May that the agency will look at whether to regulate the chemicals.

In spring this year, advocates for federal PFAs regulation accused Pruitt and the White House of trying to block a report on PFAS by another federal agency, the Agency for Toxic Substances and Disease Registry, which called for much tighter PFAS limits than those recommended by the EPA.

Pennsylvania does not set its own PFAS limits but follows EPA recommendations.

Department of Environmental Protection spokesman Neil Shader said Pennsylvania is reviewing the New Jersey report. “DEP is looking to the U.S. EPA for guidance on how to address this emerging contaminant,” he said.

In Delaware, the state does not issue consumption for fish containing PFAS, said Michael Globetti, a spokesman for the Department of Natural Resources and Environmental Control.

“Delaware, along with other states, is working with the EPA and ATSDR in continuing to get information as we deal with the broad class of chemicals that fall under PFAS,” Globetti said.