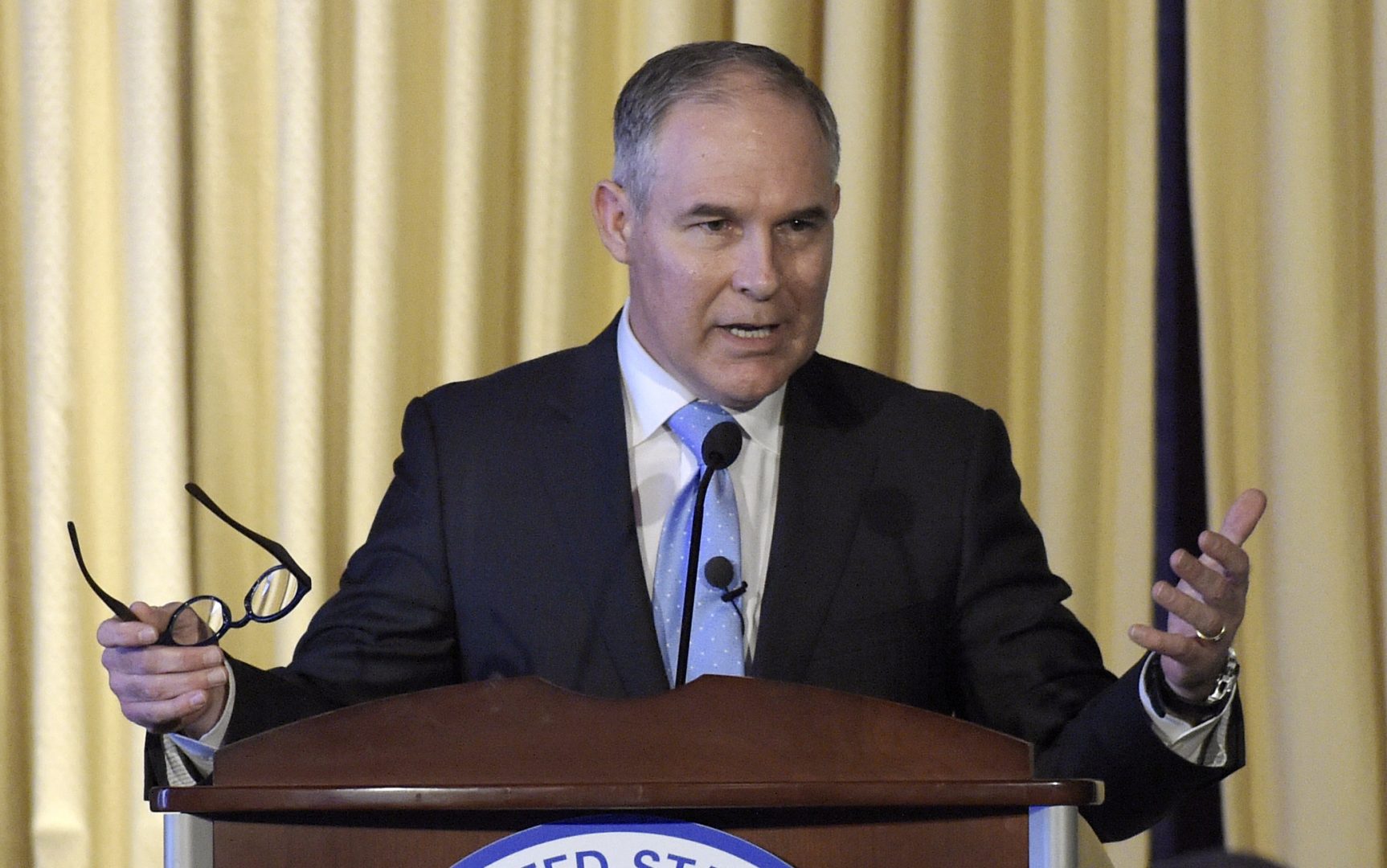 A Pennsylvania Republican Congressman accused EPA Administrator Scott Pruitt of continuing to block publication of a federal government study that reportedly shows public health is at greater risk from a class of chemicals in the environment than the EPA says it is.

Rep. Brian Fitzpatrick, who represents parts of Bucks County where water quality has been affected by the chemicals, said the public deserves to know how big a risk people face from the PFAS family of chemicals, also known as PFCs.

Fitzpatrick was one of a bipartisan group of 13 House members who wrote jointly to Pruitt in mid-May asking him to release the study from another federal unit, the Agency for Toxic Substances and Disease Registry.

Pruitt said in a letter to Fitzpatrick on March 21 that he didn’t have the authority to release the study from ATSDR, which is part of the Department of Health and Human Services.

“As with all issues related to PFAS, EPA is working with our federal partners to participate in a unified dialogue and to promote the development of science and tools so that there is a cohesive effort to tackle this important issue,” Pruitt wrote, the day before the EPA held a national summit on the chemicals.

That wasn’t enough for Fitzpatrick, who rebuked Pruitt for saying he didn’t have the authority to release the study, and promising to keep pressing for its release.

“My constituents are tired of hearing excuses from Washington,” Fitzpatrick said in a statement on May 25.  “I am disappointed at Administrator Pruitt’s lackluster response to my inquiry regarding reports that the EPA purposely suppressed a health effects study related to human exposure to PFAS. Claiming he does not have the authority to release the study is unacceptable.”

Fitzpatrick said his constituents deserve to know whether PFOA and PFOS are even more dangerous than previously thought. The chemicals are part of a family that was used in products including nonstick cookware and firefighting foam; they are no longer used in the U.S. but they persist in some public and private water supplies, and are widespread in people’s blood. The substances have been linked to some cancers, developmental disorders, immune-system problems and high cholesterol.

According to internal EPA emails obtained by the Union of Concerned Scientists, ATSDR will call for stricter limits on two of the chemicals in drinking water than is currently recommended – but not required – by EPA.

For the chemical PFOS, the ATSDR’s recommended limit will be just one-tenth of the level specified by EPA as the upper limit for safe drinking water, according to one of the emails. For another chemical, PFOA, the limit proposed by ATSDR is one-seventh of what EPA says is acceptable, the emails said.

One of the emails, from an unnamed White House official, warned of a “public relations nightmare” if federal officials tried to explain wide differences between studies done by two federal agencies on a matter of public health.

ATSDR confirmed it is preparing to release a new “toxicological profile” of four of the chemicals but did not say what its recommended levels will be or when the study will be released.

Advocates for tighter control on PFAS have long been pressing EPA to set legally enforceable limits on the chemicals, but the agency has so far only issued health advisories. The campaign for stricter limits now focuses on states like New Jersey, which last week proposed the nation’s tightest standard on PFOS.

Still, Pruitt said at a national EPA summit on PFAS last week that the EPA will consider whether to set “maximum contaminant limits” for PFOA and PFOS, and that the agency will write a national management plan on the issue by the end of the year.

Even if EPA decides to regulate the chemicals, it will be years until such regulations are in place, and so state and local rules are more likely to decontaminate water supplies in the near term, according to campaigners such as the nonprofit Environmental Working Group.

In Pennsylvania, officials use the EPA health guideline of 70 parts per trillion (ppt) for PFOA and PFOS combined, but advocates say the standard needs to be much stricter to protect public health.

Tracy Carluccio of the environmental group Delaware Riverkeeper Network said the limit for PFOA should be no greater than 6 ppt, less than half the level that is under consideration by officials in New Jersey, which has recently become a national leader in PFAS policy.

DRN’s recommendation is under review by the Pennsylvania Environmental Quality Board, which is expected to announce its conclusions in June, and may offer the state a quicker alternative than the distant possibility of federal regulation, she said.

“No state can afford to wait around for EPA,” she said.