Gage Meyer, a game commission officer, at a controlled burn in Centre County. 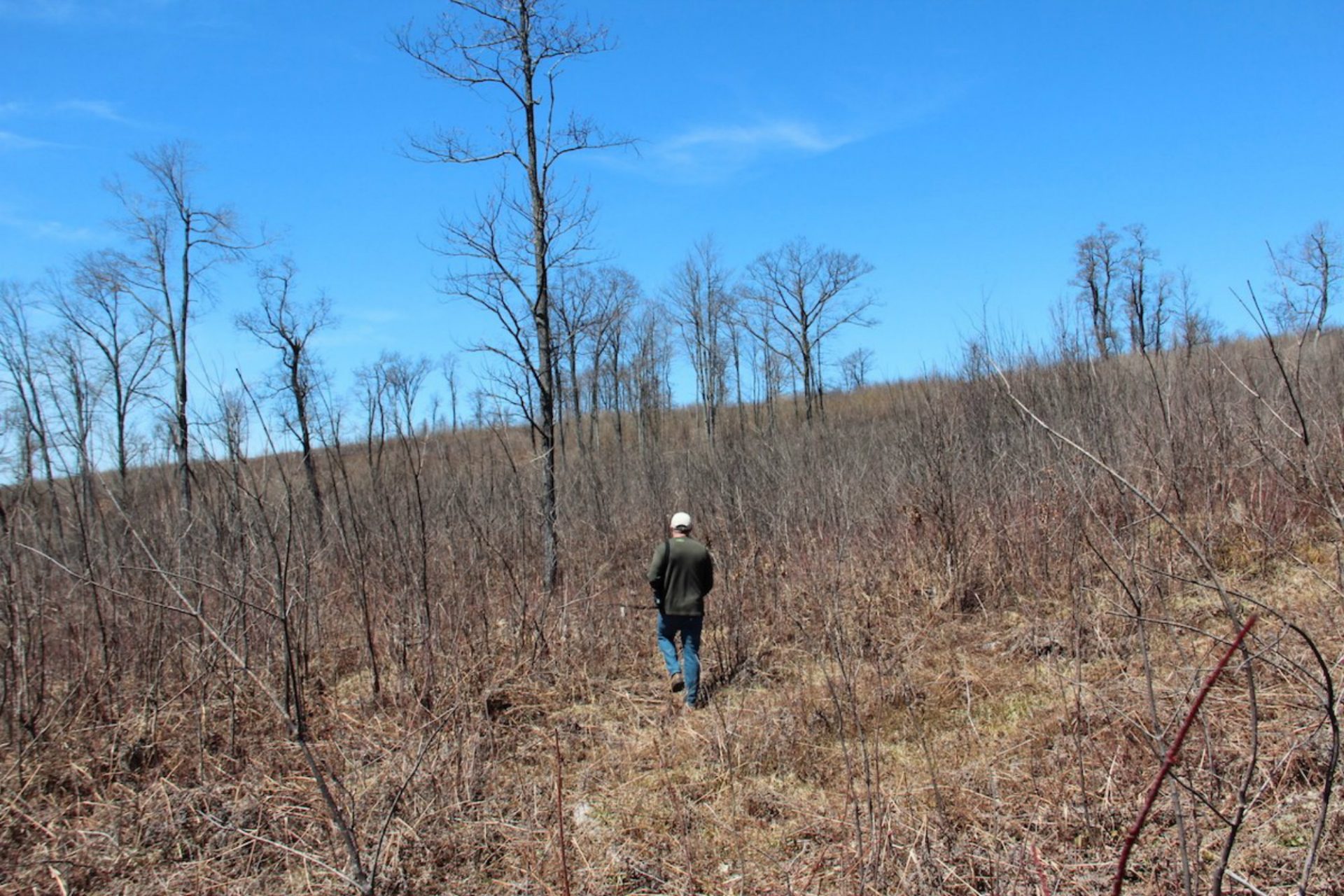 Jeff Larkin, an Indiana University of Pennsylvania biologist, in a field that was burned two years ago. The field could be a habitat for up to 20 pairs of breeding golden-winged warblers.

On a ridge at the top of the Allegheny Mountains, Gage Meyer, a supervisor for the Pennsylvania Game Commission, walked around a forest with a metal tank filled with a mix of diesel and gasoline.

“It’s not too potent but it does the job,” he said. “It’ll happen fast, especially on a day like today.”

It was sunny and dry on this spring morning. Meyer pulled out a lighter and lit a pile of leaves, damp with a mix of diesel and gasoline. Then he sprayed fuel in a straight line away from the fire from a metal can with a nozzle on it. The forest floor shot up in flames.

Normally starting a blaze on public land is frowned upon by the Game Commission, but this fire could help save a species from extinction.

Meyer is part of a crew working with the commission’s prescribed fire program. The program has been around about a decade, and uses Mother Nature’s oldest forest re-shaping tool to manage the commission’s 1.5 million acres of public game lands.

“Fire’s been a part of these habitats, for thousands of years,”  said Ben Jones, habitat division chief and fire program manager for the Game Commission. “Since the glaciers retreated, fire’s been burning through these habitats pushing ten thousand years.”

Over the years, the game commission has come to rely on fire to promote fire-tolerant tree species like pine or oak, which are especially good for wildlife.

Jones walked around the prescribed fire’s perimeter, recording windspeed, relative humidity and how fast the flame spread, coordinating a crew of 25 that would be burning 500 acres of State Game Lands No. 33 in Centre County. Part of his job is to ensure the fire doesn’t spread too far, too fast, or go places where he doesn’t want it to.

In the past, Native Americans used fires to promote certain types of berry crops and improve hunting grounds. He says this is basically what the game commission is doing today.

“After these fires, it’ll be a great place to turkey hunt,” Jones said. “Within hours after these burns we see wildlife come back.”

One species that may benefit is the golden-winged warbler.

It’s one of more than 100 migratory birds that come to breed each year in Pennsylvania, and it’s also being considered for protection under the Endangered Species Act.

Once abundant, its population has declined by two-thirds since the 1960s. In the Appalachian Mountains, it’s declined by 98 percent. Several states and the federal government are spending millions to keep the species from going extinct. Its decline is linked to loss of habitat, said Jeff Larkin, a biologist at Indiana University of Pennsylvania.

It’s a tiny grey bird, with splashes of brilliant yellow on its head and wings, that give the bird its name.

The golden-winged warbler winters in parts of Central and South America that are rapidly being deforested, and then migrates to North America in the spring. Which is pretty amazing for a creature that weighs only 9 grams. 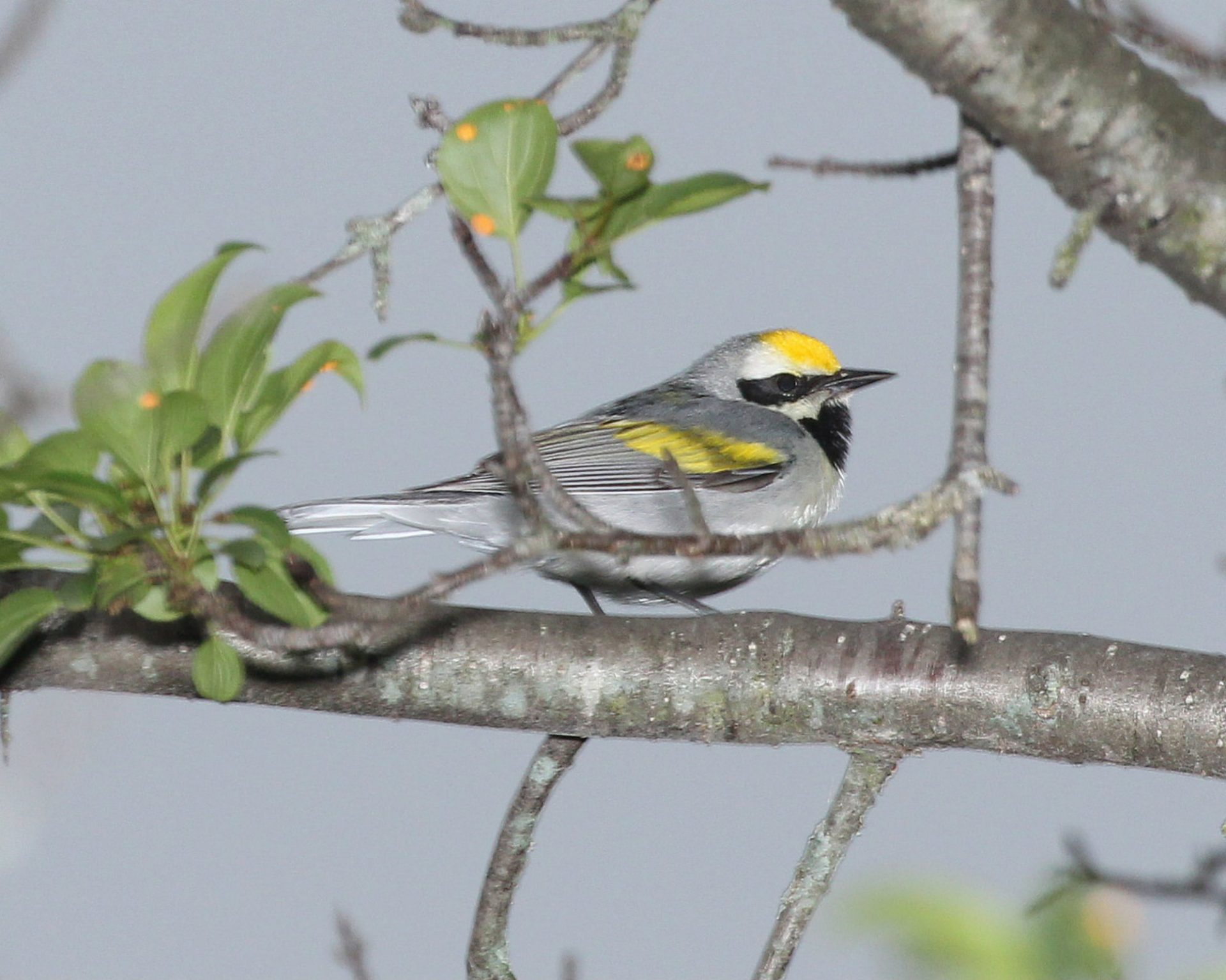 “We’re talking about (a bird) the weight of a quarter or a nickel,” said Larkin. “Think about that critter trying to get across the Gulf of Mexico and then find its way back to its breeding grounds.”

Those breeding grounds are young forests – like those created by the controlled fires. They don’t nest high in the trees, but closer to the ground.

“Because they’ve got kids that can barely fly,” Larkin said. “They’re trying not to be eaten by hawk and snakes and chipmunks and everything else that wants to eat a songbird and they’re also trying to make sure that there is ample amounts of food.”

But that perfect young forest is rare in Pennsylvania. Why? A century ago, Larkin says, most of Pennsylvania’s forests were clear-cut. They grew back, but they all have trees that are more or less the same age. “When that happened. All of our forest basically their age became reset.”

The result is that most forests in the state are about 100 years old. That’s good for some species, especially those that need taller canopy trees to nest in, but it’s bad for Golden-Winged Warblers and other species that evolved to survive in specific habitats.

At a field in Game Lands 33, Larkin waded through a tangle of blackberry bushes, and oak and maple saplings that are growing back.

The field was burned two years ago. Larkin pointed out a pitch-pine tree with scorch marks on its side that survived the fire. This field was a potential landing spot for a Golden Winged Warbler, flying up this spring from South America, Larkin said.

In a few months up to 20 pairs of the birds could build nests on piles of leaves, getting cover from ferns and tall grasses. “Those are the places that they like to go to seek out to build a nest and to raise their young.”

This story is part of The Allegheny Front’s series, Wild Pennsylvania, which is funded by the Richard King Mellon Foundation. To check out the other stories in the series, click here.