As nuclear power loses ground to natural gas, environmentalists are torn: Are the risks worth saving it for climate’s sake? | StateImpact Pennsylvania

As nuclear power loses ground to natural gas, environmentalists are torn: Are the risks worth saving it for climate’s sake? 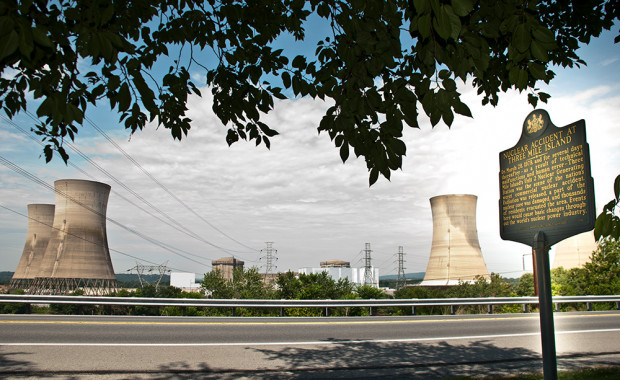 The natural gas boom was supposed to help the electric sector lower its carbon footprint by replacing old, carbon dioxide-spewing coal plants with newer, lower-emitting natural gas plants. And to a degree, that’s happened. As coal plants have retired, carbon emissions from the power sector have decreased.

But the flood of cheap natural gas is also threatening the nation’s biggest source of carbon-free electricity: nuclear power.

In Pennsylvania and Ohio, four nuclear plants have said they are shutting down, years ahead of their scheduled retirement dates, unless they receive state aid. Those include Three Mile Island, near Harrisburg, and Beaver Valley, in Shippingport, Pa., as well as the Davis-Besse and Perry plants in Ohio. If those plants close, that’s bad news for climate hawks.

“If your concern is about climate change and you view it as an urgent and perhaps even existential threat to human society, then you should be very concerned about the closure of nuclear power plants,” said Jesse Jenkins, a Ph.D. candidate at MIT studying the electric grid.

That’s because the power currently generated by soon-to-close nuclear plants will likely be replaced mainly by natural gas, which produces about half the carbon dioxide as coal.

Together, the four plants provide enough electricity to power 4 million homes. A recent industry-funded group found the plants provide more electricity than all the wind and solar in the PJM Interconnection, the electric grid that serves 65 million people in the mid-Atlantic region. The report estimates that replacing the four plants would produce the same amount of carbon pollution as 4.5 million more cars on the road.

“Each one of those nuclear power plants is a significant source of low carbon, emissions-free electricity, and losing each one is a significant step back at a time we should be making rapid progress towards a zero carbon energy system,” Jenkins said. 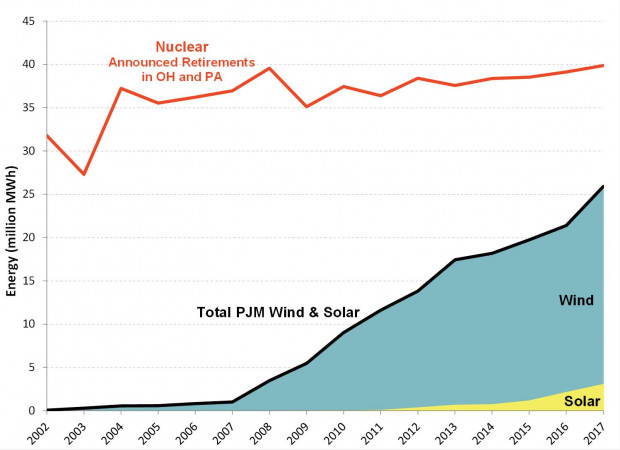 To stay in business, the owners of nuclear plants are turning to states and the federal government for help. FirstEnergy has asked the federal government to declare a grid emergency to keep its coal and nuclear plants running.But keeping these plants online might be difficult in an electricity market flooded by cheap natural gas. Jenkins’ research found that low natural gas prices were the main reason for the struggles of the nuclear industry.

New York and Illinois are subsidizing struggling nuclear plants through ‘zero emissions credits’ — subsidies that pay plants based on the amount of carbon pollution they save.

Matt Wald, a spokesman with the Nuclear Energy Institute, an industry trade group, says the subsidies are necessary.

“We are seeking to have the market recognize the things that we provide to the system,” Wald said. “It doesn’t do that now.”

“If they’re replaced by plants that burn fracked gas, then that’s definitely a problem,” said Tom Schuster, a senior campaign representative for the Sierra Club in Pennsylvania.

But, Schuster said, nuclear energy carries its own environmental problems: radioactive waste, impacts from uranium mining, and the risks of a Fukushima-like disaster. Also, he says, money spent keeping nuclear plants open could be spent building out the renewables sector.

“If policies to bail nuclear plants out are structured such that we’re spending a lot of money to keep plants online that we could otherwise be spending on truly clean sources of energy, then that’s problematic.”

But nuclear is still the country’s top source of carbon-free electricity. So the Sierra Club supported a nuclear bailout in Illinois that also promoted renewables, Schuster says.

“I kind of think about it as thinking about nuclear plant policy as a phase out rather than a bailout,” Schuster said.

In New Jersey, the state will spend $300 million a year to keep three nuclear plants online, while it also raised its renewable energy targets to 50 percent by the year 2030, and took separate actions to boost solar power and energy storage.

Schuster says the best way to lower carbon emissions is to simply tax them. That would make coal and natural gas more expensive, he said, which would increase the use of renewables and nuclear energy. But a federal tax on carbon emissions is unlikely. So most of the activity to keep nuclear plants online is in the states.

Any action in Pennsylvania to bail out its nuclear plants would face stiff opposition. Pennsylvania’s large natural gas industry opposes any such idea.

Stephanie Catarino Wissman, executive director of the Associated Petroleum Industries of Pennsylvania, said in an email that her organization “opposes any effort to subsidize one form of energy over another because when the government picks winners and losers in the electricity markets, consumers pay the price.”

CORRECTION: Sierra Club supported a bailout in Illinois, but not in other states, as a previous version of this story reported.