In New Jersey, opponents of offshore drilling gear up for a fight | StateImpact Pennsylvania Skip Navigation

Scallops for sale at the Fisherman's Coop in Point Pleasant, NJ. Scientists say even small oil leaks, or chemical spills from offshore drilling could impact the fishery.

In New Jersey, opponents of offshore drilling gear up for a fight 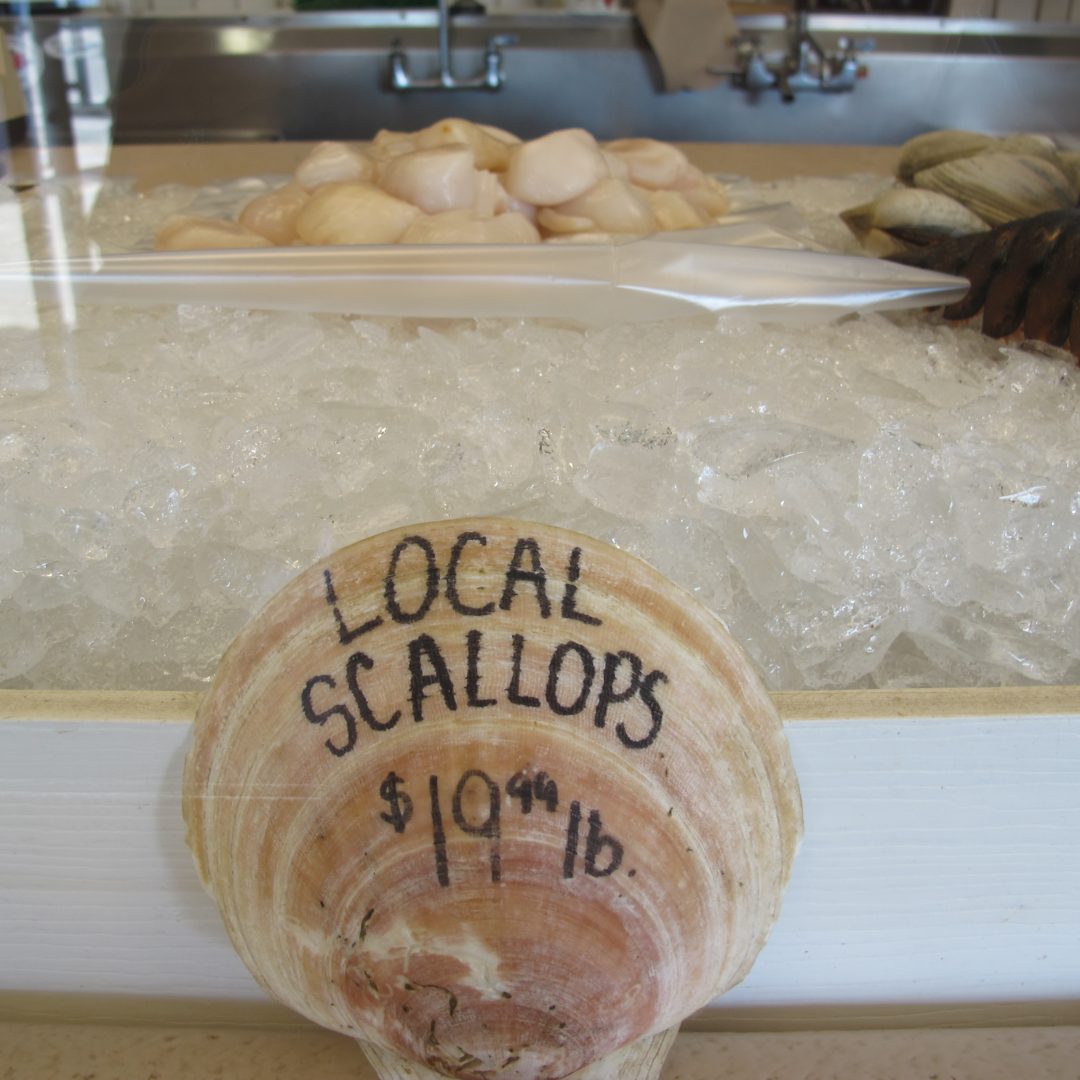 Scallops for sale at the Fisherman's Coop in Point Pleasant, NJ. Scientists say even small oil leaks, or chemical spills from offshore drilling could impact the fishery. 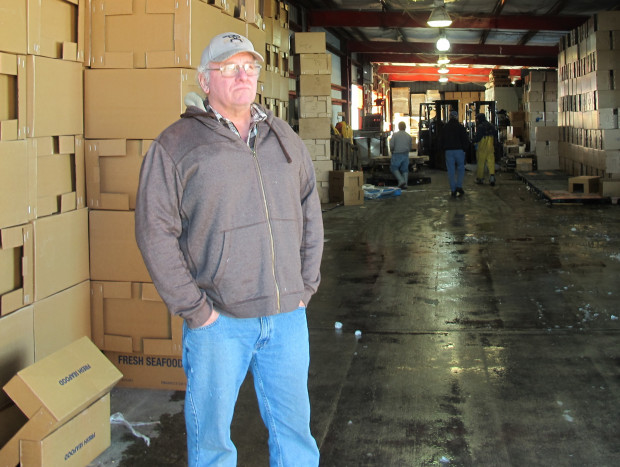 Fisherman Jim Lovgren says drilling off the Jersey coast is not worth the risk. The Trump administration has proposed opening up the entire eastern seaboard to offshore drilling.

Jim Lovgren is a third-generation fisherman and captains the Shadowfax. At the Fisherman’s Coop in Point Pleasant New Jersey recently, he watched as about a half-dozen men sorted freshly caught scup — or porgies — into bins.

“These fish they’ll be put in a cooler by tonight,” he said. “There could be 30,000 to 40,000 pounds of fish on the docks today. They will all be on their way to New York, Philadelphia, and Baltimore. We ship anywhere from Canada down past North Carolina.”

Lovgren grew up trawling the waters off Sandy Hook. He says the fishery is already stressed from rising ocean temperatures. While there used to be dozens of fishing boats here, Lovgren said today there’s only a handful. He worries that if oil and gas companies drill offshore, he’ll be put out of business.

“Blackback flounders are just about extinct in this area here,” he said. “That was a major fishery. yellowtail flounders, codfish, lobsters are disappearing off the Jersey coast and it’s all because the water’s getting too warm.”

Lovgren knows that burning fossil fuels is connected to climate change, warming oceans and his disappearing fish. Still, he said, he needs fossil fuel to trawl the ocean floor.

But President Trump’s offshore drilling proposal is an immediate threat to his livelihood, and he’s gearing up to fight it.

Lovgren, along with other fishermen, environmentalists, realtors, and local business owners, descended on a hotel near Trenton Thursday voicing their unified opposition to drilling for oil and natural gas off the coast of New Jersey.

The public meeting,hosted by federal officials from the Bureau of Ocean Energy Management, comes as the Trump Administration has proposed opening up the entire East Coast to offshore exploration.

But the proposal has little support along the Jersey coast.

“You start putting a bunch of oil rigs out there and it takes away places that we can tow, where we can fish,” Lovgren said. “The main concern is an oil spill.” 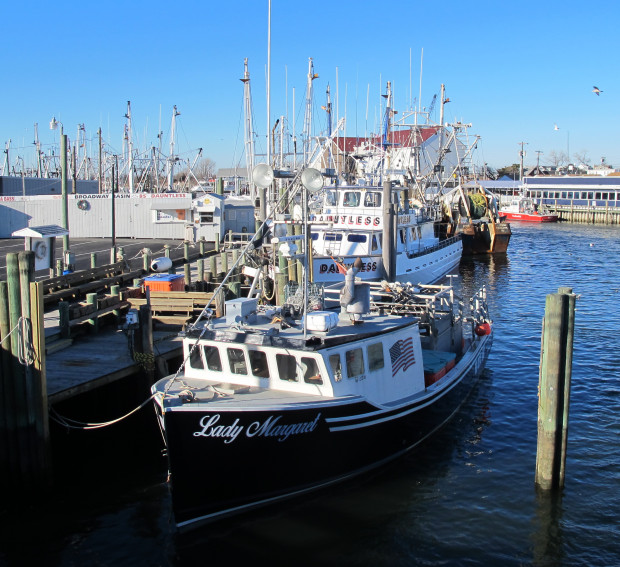 Talk to anyone who makes their living along the Jersey shore, whether it’s selling salt water taffy or renting shore houses, and they’ll tell you they don’t want another Deepwater Horizon along the East Coast. The Deepwater Horizon drilling rig explosion off the coast of Louisiana in 2010 spilled an estimated 171 million gallons of oil into the Gulf of Mexico, decimating the fisheries and driving away tourists.

“You know if we had a Deepwater Horizon spill down in Delaware,” Lovgren said, “it’s going to come right up off the Jersey shore. It’s going to wash right into Long Island onto the beach. It could be hitting Cape Cod and Nantucket. Now that could be devastating.”

Lovgren voted for President Trump, and still supports him. But not his proposal. He worries seismic testing, which is used to find the oil and gas reserves, would hurt whales and dolphins.

And he’s not alone. 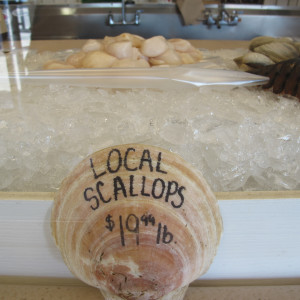 Scallops for sale at the Fisherman’s Coop in Point Pleasant, NJ. Scientists say even small oil leaks, or chemical spills from offshore drilling could impact the fishery.

David Velinsky runs the Department of Biodiversity, Earth and Environmental Sciences at Drexel University. He’s also vice president for science at the Academy of Natural Sciences in Philadelphia.

“Just the industrialization of the coastal area would have an impact on the fisheries,” he said. “You’re going to have more ship traffic, more accidental spills of various chemicals as they drill into the sediment.”

Velinsky says a spill along the eastern seaboard could have even greater impact on the coastal ecosystem than the Deepwater Horizon accident had in the Gulf. That’s because the Gulf of Mexico already has natural oil seeps.

“So that system has adapted to having those hydrocarbons in the water already,” he said. “On the East Coast we don’t have those natural seeps, as they call it. So the system would be more of a shock to the system than it would have been in the Gulf.”

Some opponents say in addition to the risks to the environment, the country should be moving away from any fossil fuel development.

Paul Eidman runs a recreational fishing boat, and he says fossil fuels should be left in the ground.

“I just think it’s archaic thinking and it’s not progressive at all, it’s not looking towards anything renewable,” Eidman said. “Fossil fuels are clearly not the future. And you’re not going to have the tragic events surrounding oil with energy like wind and solar and geothermal.”

Eidman is no stranger to political battles. In the mid-1980s, he unsuccessfully fought against a dredge project by the Army Corps of Engineers, which ended up depositing dredged material from the Newark Bay off the coast. And more recently he was the lead plaintiff in a lawsuit aimed at protecting river herring, which he won.

It’s unclear whether the Department of Interior will approve lease sales off the Jersey coast, but Eidman says it pays to be prepared. 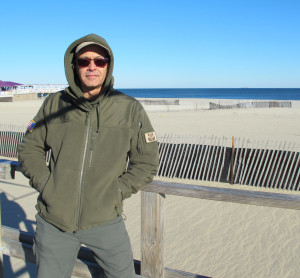 Paul Eidman stands along the boardwalk in Point Pleasant. Eidman owns a recreational fishing boat and makes his living off the tourist trade. He thinks fossil fuels should stay in the ground.

Politicians on both sides of the aisle are also lining up to fight this proposal. Only one East Coast governor, Maine’s Paul LePage, actively supports it.

But beyond three miles offshore, the ocean belongs to the federal government.

The last time drilling occurred off the coast of New Jersey was in the early 1980s when oil companies explored about 80 miles east of Atlantic city. It was short-lived. They decided there just wasn’t enough oil to justify the cost. But the industry says improved technology means it’s worth exploring today.

Jim Benton is the executive director of the New Jersey Petroleum Council, which says oil rigs could bring thousands of jobs and millions of tax dollars to the state. And he says drilling rigs and fishing already co-exist.

“You go up to Nova Scotia, you go up to Newfoundland, and those are places where tremendous deposits have been found,” Benton said. “And energy is being produced today.”

Benton says spills like the Deep Water Horizon are rare.

“After that unfortunate accident, we did establish a research facility that really brought about some major changes along with federal regulations to undertake a comprehensive safety review,” he said.

But back on the dock in Point Pleasant, Jim Lovgren said he’s not convinced.

His electric bill, he said, is a third of what it used to be.

“And they can do better. I think every building, every house in this country should have solar power.”

Lovgren knows solar won’t provide the horsepower he needs to operate his boat. But, he said, drilling off the Jersey Shore is not worth the risk.

What will Sunoco's $12.6 million Mariner East 2 penalty be spent on?