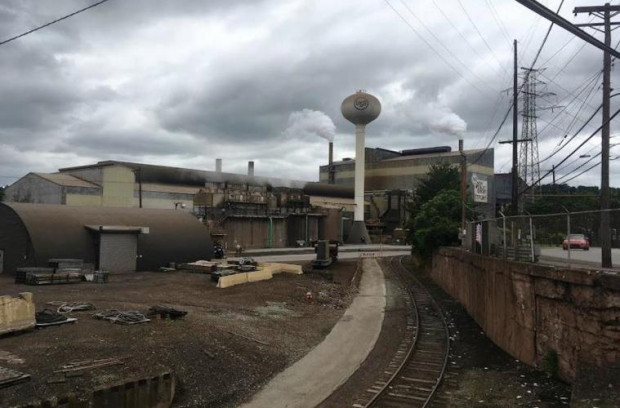 US Steel has signed a lease with New Mexico-based Merrion Oil and Gas, to develop a Marcellus shale gas well on the grounds of the Edgar Thomson works, originally built in 1875 by Andrew Carnegie.

The well site will be on the eastern edge of the property, in North Versailles Township, according to a drilling permit application Merrion submitted to the Pennsylvania Department of Environmental Protection (DEP).

An agreement signed by US Steel and Union Railroad allows drilling “within 200 feet of a building” at the site.

Ryan Davis, operations manager at Merrion Oil and Gas, a Farmington, N.M.-based company, said this would be the first well the company drilled in Pennsylvania.

“We think the rock quality there is going to be good,” Davis said.

The company plans to drill six horizontal wells at the site into the Marcellus, but could also use the well pad to drill and frack into other rock formations, like the Utica shale, Davis said.

The Edgar Thomson works is part of a complex of US Steel mills along the Monongahela River that includes its Clairton Coke Works.

US Steel spokeswoman Meghan Cox said in an email Merrion was in the “beginning stages” of the process to obtain its permits to drill a gas well on a 10-acre parcel the company has leased from US Steel.

“We view this project as a potential opportunity to enhance the long-term cost competitiveness of our local Mon Valley works facilities, including Edgar Thomson plant,” Cox said.

Merrion’s Davis says the industrial nature of the steel mill means noise and traffic created by oil and gas operations won’t be so noticeable.

“The industrial area makes this unique. It allows us to kind of blend in with the current activity that’s there,” Davis said.

Local opposition sprouted over a plan to drill and frack at the nearby Grand View Golf Club in North Braddock in 2014. The plan never came to fruition.

Davis said the company will hold town-hall style meetings to placate any opposition to the company’s plans.

“Most of the time people are antsy or scared of the oil and gas development because they don’t understand the process,” Davis says. “And so as we get a little further down the road we’ll be holding some community outreach events to try to educate the public and allow them to ask questions so we can answer them–give them an inside view in how we’re doing it.”

But some residents who live near the plant say they’re worried about pollution from the gas well and from increased diesel truck traffic to service it.

Hannah Reiff, is with a local group called North Braddock Residents for our Future, which opposes the well.

“Our community and all the surrounding communities are subjected to very high levels of pollution,” Reiff said. “People still live here and they’re pretty close to that site and they shouldn’t be subjected to any of the environmental risks that come along with unconventional gas wells.”

The company does not need an air quality permit from the Allegheny County Health Department, as long as the company stays “within certain emission restrictions and comply with regular testing and repair as evaluated by DEP,” said agency spokesman Ryan Scarpino, in an email. “Currently, none of the wells in Allegheny County have required permits.”

In November, the health department and EPA cited the plant for “multiple violations” of county and federal air quality rules, including “excessive visible emissions, failure to maintain equipment and failure to certify compliance” with a federal air permit.

Though North Versailles is classified an environmental justice area by the DEP, oil and gas wells aren’t subject to the extra public participation elements that go along with the designation.

Pennsylvania defines “environmental justice areas” as census tracts with at least 30 percent minority population and/or 20 percent of the population under the federal poverty line, with the idea that these communities frequently shoulder a disproportionate amount of the cost of industrial development.

Once a community is designated, people there get more notice and opportunities to comment on industrial developments that could impact them.

The DEP held a meeting with Merrion officials Nov. 2, said agency spokeswoman Lauren Fraley, in an email. The department expects a second meeting with the company “in the near future,” Fraley said, specifically for an erosion and sedimentation control permit.

Top 10 things you need to know about Mariner East 2