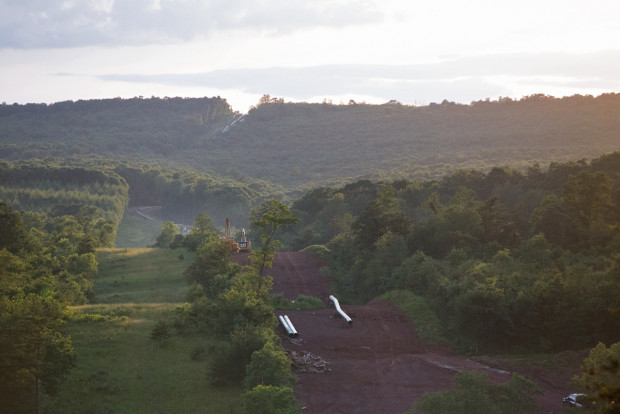 A spokesman for the Department of Environmental Protection said the massive cross-state project has been far more of an enforcement challenge than officials expected because of multiple drilling leaks that have seeped into wetlands, bubbled up into residential areas, and in some cases turned private well water cloudy.

“Additional enforcement is certainly something that we are looking into but I can’t comment as to what that might look like,” DEP spokesman Neil Shader told StateImpact the day after the department issued its latest two notices of violation for spills in Berks and Chester Counties.

Shader said the project has been a headache for DEP, even allowing for the large size of the 350-mile cross-state pipeline, and he said officials have stepped up their efforts even after a settlement brokered by the Environmental Hearing Board last summer imposed stricter conditions on drilling, following dozens of spills — known as “inadvertent returns.”

“I don’t want make it sound like we weren’t being diligent beforehand but we are certainly taking everything incredibly seriously as these inadvertent returns and other incidents have piled up,” Shader said. “We have certainly paid much more attention to this than we anticipated.”

After a chorus of complaints by lawmakers and the public about the spills, DEP Secretary Patrick McDonnell said earlier this year that the department would rigorously enforce environmental laws during pipeline construction.

McDonnell’s statement also followed evidence that DEP had issued construction permits in February even though Sunoco had not met all the regulatory requirements.

The notices are the latest in a string of 16 that DEP has sent to Sunoco since it signed the settlement agreement, which required Sunoco to re-evaluate the geology at spill sites and obtain DEP approval before restarting drilling there.

Still, DEP has accused Sunoco of violating its permit conditions rather than the settlement agreement itself.

“We can’t show up at Sunoco’s door and say, ‘You violated the August 10th settlement,’” Shader said.  “We just don’t have any sort of authority or enforcement mechanism to go after them for violating the agreement itself.

“I think it would be fair to say that they violated permit conditions altered by that August 10th settlement. To say that it violated the settlement takes it into this weird, legally nebulous area that I know our lawyers always push back on,” he said.

Sunoco spokesman Jeff Shields said the company will provide formal responses to the latest notices of violation this week. But he denied the company has been violating its permit conditions in West Whiteland Township.

“Based on our understanding of the protocols for notifying the DEP of inadvertent returns, we have been complying with our permits and will continue to comply,” Shields said in a statement.

In response to earlier notices of violation, Shields has said the company has always complied with the settlement agreement.

Sunoco’s critics say the company continues to cut corners in its haste to complete the pipeline, and that it has violated the settlement agreement in the process.

Alex Bomstein, an attorney for the environmental group Clean Air Council, which led the challenge to Sunoco at the Environmental Hearing Board, said the new notices of violation show the DEP accusing Sunoco of violating not only environmental laws and permit conditions but also the settlement agreement.

That deal includes a spill-response plan known as “IR PPC” which Sunoco did not comply with, meaning that the overall settlement was also violated, Bomstein said. Violation of the plan “is by definition a violation of the settlement agreement,” he said.

The latest violations, dated Nov. 16, say Sunoco spilled drilling fluid at New Morgan Borough, Berks County on an unspecified date, and West Whiteland Township, Chester County, on Nov. 11. The DEP says Sunoco broke two environmental laws by discharging fluids classified as industrial waste, and by violating some of the conditions attached to the DEP’s permits for building the pipeline.

Both notices also list different ways in which Sunoco violated a plan on how to respond to spills which was part of the agreement signed in August by the company, DEP and three environmental groups.

The Chester County notice says Sunoco is required by both the spill plan – called the “IR PPC Plan” — and by one of DEP’s permits, to immediately report any spill to the DEP’s 24-hour response line, but that the company never made the report.

“The Department is very concerned with Sunoco’s continued failure to provide the required notifications for these incidents,” the notice says.

The Chester County incident appeared to have caused the ground to sink at one location, the notice said.

Among its criticisms, the DEP dismissed Sunoco’s description of the Chester County spill as a “loss of containment” from an earlier spill, saying the incident still met the definition of an “inadvertent release.”

George Turner, a supervisor for West Whiteland Township, said on Monday that a sink hole measuring about 4 feet square has opened at a property on Lisa Drive in the township near where a,  spill of bentonite clay drilling fluid occurred in response to drilling.

Turner said the sink hole is fenced off and drilling is shut down while Sunoco deals with DEP on a resolution. “There has been no drilling there in two weeks,” he said.

In Berks County, Sunoco failed to notify DEP by telephone that the spill had occurred. The violation notice also accused the company of failing to give DEP at least 24 hours’ notice of the start of horizontal directional drilling, and of failing to submit an initial report on the incident.

The Berks spill discharged fluids into a tributary of a trout stream classified as being of “exceptional value,” the notice said.

The August agreement requires Sunoco to submit the site reviews to DEP for approval, to give landowners 10 days’ notice of its plans to resume drilling, and to let residents know if there is a “substantial probability” that drilling will affect private water wells.

Judge Bernard Labuskes of the Environmental Hearing Board ordered a temporary halt to drilling while the agreement was negotiated, contributing to a string of delays that has left the pipeline some 18 months behind its original schedule, according to the company’s latest target for completion.

During a quarterly earnings call on Nov. 8, company officials accused DEP of taking its time to approve the resumption of drilling in some locations, and they said it is trying to resolve a dispute with West Goshen Township, Chester County where the Public Utility Commission has blocked the construction of a valve along the line, pending a hearing next April.

Sunoco officials said during the call that there is strong demand for transmission of the natural gas liquids that will be carried by the more-than $2.5 billion line, but that the regulatory and technical delays have forced the company to push back the completion date again, this time until the second quarter of next year. Sunoco had hoped to have the pipeline up and running by the end of 2017.