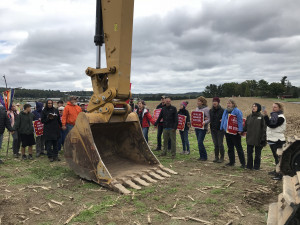 FILE PHOTO: Protesters confront a construction crew for the Atlantic Sunrise pipeline in central Pennsylvania. A new PUC ruling may make it easier for communities to control pipeline development.

(Harrisburg) — Construction on a controversial natural gas pipeline has resumed after a two-day court delay.

On Monday, the U.S. Court of Appeals for the District of Columbia issued a temporary hold on the Atlantic Sunrise project as it reviewed an emergency motion filed by environmental groups to halt construction.

The court denied the motion on Wednesday.

Opponents wanted federal regulators to conduct a more thorough review of the pipeline’s environmental impacts, but the court said the petition did not satisfy “stringent requirements” for a stay.

John Dernbach, Commonwealth Professor of Environmental Law at Widener University Commonwealth Law School, said courts will often issue a stay against construction while an appeal is in process.

“But the lifting of the stay makes it much less likely that the environmental claims in this case are going to prevent construction of the pipeline,” Dernbach said.

In fact, after the stay was lifted, pipeline company Williams said it would promptly resume construction.

The Atlantic Sunrise will run through 10 counties, including Lebanon, Lancaster, Northumberland, and Schuylkill. The project is expected to be complete by the middle of 2018.

“It is still possible that the environmental groups will prevail on the merits, but at that point much more of the pipeline will have been constructed,” Dernbach said.

In a statement, the Sierra Club vowed to continue the effort to stop the pipeline from being built.

A separate lawsuit filed by a group of nuns is before the U.S. Court of Appeals for the Third Circuit. The Adorers of the Blood of Christ argue the construction of the pipeline on their land violates their religious freedom.