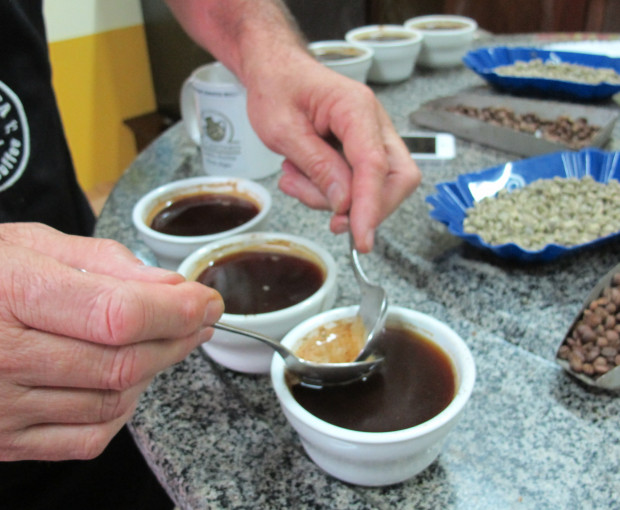 Ulises Ramírez began picking coffee when he was ten. It’s a family trade that dates back generations in the western valley of Costa Rica, where high altitudes and volcanic soils help produce some of the best coffee beans in the world. The 37-year-old now oversees farming at the Santa Anita Coffee Estate, a 250-acre coffee plantation in Naranjo, Costa Rica. Ramirez has seen a lot of changes in the past 17 years.

“The climate is crazy. Sometimes it will rain for days and then there won’t be rain and there’s way more pests than there used to be so we have to buy more products to combat the pests,” he said.

Ramírez works on a farm that is not only trying to adapt to a changing climate, it’s trying to do its part to limit greenhouse gas emissions. Santa Anita is one of a few coffee farms in the country pioneering efforts to produce low-carbon coffee.

The low-carbon coffee that Costa Rica is pushing is part of an overall plan by the country to become the first carbon neutral nation and serve as an example to the rest of the world for how to tackle climate change. It’s a small country with big climate ambitions.

Pascal Girot is a senior advisor to Costa Rica’s Minister of Environment and Energy.

Costa Rica only produces about one percent of the world’s supply of coffee. But it wants to be the leading nation for producing climate-friendly products, starting with coffee. That could differentiate Costa Rica from its larger competitors.

“We’re never going to be able to compete with a country like Brazil, or Colombia or Mexico because they’re far bigger,” Girot said. “And they can produce at a much lower cost.” 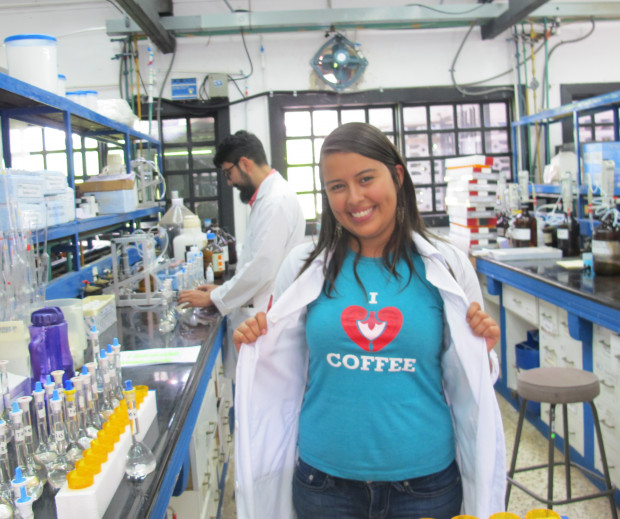 Catherine Mora and Juan Carlos Alvarez work as researchers for the Coffee Institute of Costa Rica.

Banking on the millennials

María Paz Lobo works for the Coffee Institute of Costa Rica, a government agency. Her job is to figure out what kind of coffee the millennial population in the U.S. and Europe will want to buy. She says Costa Rica is banking on them as a future market for high-quality, environmentally friendly, low-carbon coffee. 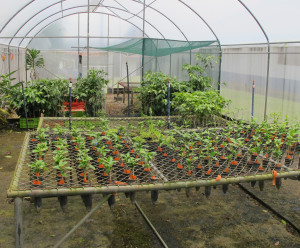 Inside a greenhouse at the Coffee Institute of Costa Rica’s experimental farm.

She says research has shown them that millennials care a lot about the social and environmental impacts of whatever they consume.

Costa Rican coffee is highly regulated to maintain a high-quality brand. Producers are also guaranteed a significant cut of the profits. The Coffee Institute must approve exports, and mandates all producers grow Arabica coffee.

But climate change is a challenge. For example, coffee rust is a fungus that has gotten worse due to climate change. And if temperatures increase at higher altitudes, that could also impact the quality of the coffee. Given those challenges, Lobo knows how important it is to try to save the country’s coffee farms. Because in Costa Rica, a good cup of coffee also means a good living for farmers.

“What we are hoping for is that the low-carbon initiatives will make our differential price higher, so we can charge a little more for that coffee with low-carbon,” said Lobo.

According to Kim Elana Ionescu, chief sustainability officer of the Specialty Coffee AssociationThe carbon footprint of coffee growing is not as large as that of roasting,. The electricity usage for roasting large quantities of coffee happens in the importing countries though, not in producing countries like Costa Rica. And since transport on large container ships is so efficient, that doesn’t add much to the impact of the exporting nations.

It’s a complicated process measuring the carbon footprint of coffee on the farm. That’s why the plantations growing low-carbon beans need to hire a carbon auditor. And the country is experimenting with a rating scale. 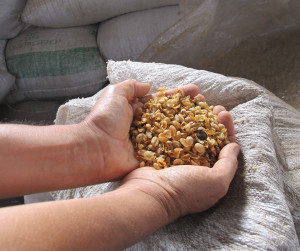 Parchment from the coffee cherry is a waste product of the milling process. At the Santa Anita Coffee Estate the parchment is bagged to be used as biofuel to power the mill. It’s all part of creating low-carbon coffee.

The milling of green coffee beans — or cherries as the ripe coffee fruit is called — is perhaps the most obvious carbon impact to tackle. Several layers of the cherry must be removed – and disposed of before the green coffee bean is ready to be exported. At the Santa Anita farm, a large solar array helps power the mill.

Water is used to wash the mucilage off the bean, and remove a layer referred to as parchment. Costa Rica is encouraging farmers to reuse the wastewater to irrigate the coffee plants. And as a result of the carbon audits, they discovered that the fruity mucilage emits methane when it decomposes, another strong greenhouse gas. So the Coffee Institute has developed a gasification method to turn that waste pulp into fuel.

The parchment, which when removed resembles dried leaves, is used as biomass to further help power the mill.

Perhaps the largest carbon emitter in the equation is fertilizer, because man-made fertilizers come from fossil fuels. So the goal is to minimize those applications as much as possible. On the flip side, the plants and shade trees act as carbon sinks, absorbing carbon dioxide from the atmosphere.

Is there a market for low-carbon coffee?

Costa Rica has developed labels and a numeric system to help market their low-carbon bags of coffee. Ric Rhinehart, executive director of the Specialty Coffee Association, says before anyone is going to pay more for low-carbon coffee, it has to taste really good. So, Costa Rica may be the best place to try it. 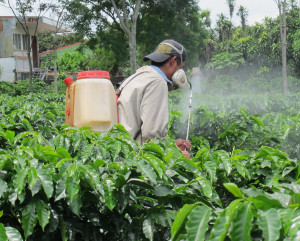 A worker sprays fungicide at a government owned experimental farm in Costa Rica. Coffee rust has become more prevalent because of changes in rainfall.

“Costa Rica produces some phenomenal coffee,” he said. “That’s not to say it’s all great but there sure is a lot of good coffee coming out of there. As a country it has been very focused on environmental sustainability and I think Costa Rica is a perfect place to experiment with these values and how they might be successfully brought to market.”

An annual survey done by the National Coffee Association points to a possible interest in low-carbon coffee among younger coffee drinkers.

“It’s certainly the case in that study that younger consumers in particular are concerned about the sustainability of the coffee farming that produces their coffee,” he said.

Rhinehart also said that consumers have a hard time with complicated labeling that would attempt to measure the carbon footprint of a bag of coffee.

And right now there’s an oversupply of specialty coffee like Fair Trade, which means low carbon coffee is not a slam dunk selling point.

At Brown Street Coffee in Philadelphia, customers line up for cups of coffee sourced from places like Vietnam, Ethiopia and Costa Rica. Shop owner Eric Cha says he’s not so sure Costa Rica is making the right choice. 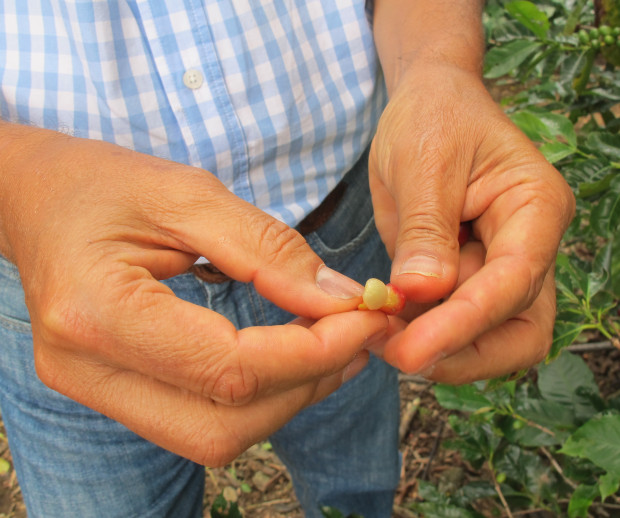 It’s not cheap making low-carbon coffee. And Costa Rican producers work with higher prices to begin with. Those who are investing in efforts to reduce carbon emissions, like the owners of the Santa Anita farm, see it as an investment for the future coffee market.

But Cha says he’s not so sure his customers would pay extra.

“I think the price of coffee at a consumer level, I think is dropping,” he said. “As a business, trying to pass that cost onto the consumer, I think it should be very tough.”

But so far, the producers haven’t gotten coffee drinkers to pay a higher price for a cup that tastes good, and is good for the climate.

Reporting for this story took place during a climate journalism workshop organized by Internews’ Earth Journalism Network, the Stanley Foundation and Latin Clima.