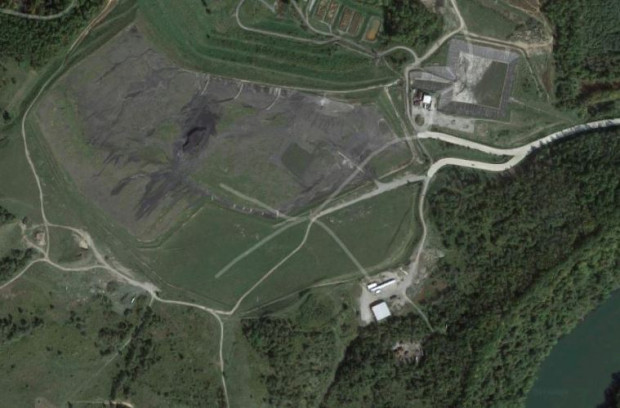 A Greene County coal ash landfill won’t be receiving any more coal waste until December, at the earliest. Environmental groups hope the landfill may have seen its last shipment of the waste.

As part of a settlement reached between FirstEnergy and two environmental groups in September, the company will be making repairs to its coal ash landfill near its now-shuttered Hatfield’s Ferry Power Station. The deal includes a provision that FirstEnergy hold off on shipping any waste from the Bruce Mansfield Power Station in Shippingport, Pa. to Hatfield’s Ferry until December 1.

Charles McPhedran, an attorney for Earthjustice, which negotiated the settlement, said he hopes that since FirstEnergy plans to close or sell Bruce Mansfield by 2018, the landfill at Hatfield’s Ferry may never get coal ash from the power plant.

“It’s possible that Bruce Mansfield plant will not ship waste to this landfill at all,” McPhedran said.

FirstEnergy spokeswoman Stephanie Walton said in an email the company “has no immediate plans” to send coal ash to Hatfield’s Ferry. Walton says that most of the work to repair the site has been completed.

As for the future of the Bruce Mansfield plant, Walton said: “The company continues to conduct a strategic review of its competitive generating fleet, including Bruce Mansfield, and expects to complete that process by mid-2018.”

The deal is the latest in the hot-potato issue of what to do with coal ash from the Bruce Mansfield Power Station, Pennsylvania’s largest coal-fired power plant. The plant, in Beaver County, originally sent its coal ash and scrubber waste to Little Blue Run, a 1,700-acre slurry pond that straddles the Pennsylvania-West Virginia border.

But Little Blue closed at the end of 2016, and the company proposed sending 2.5 million pounds of coal ash a year from the Bruce Mansfield plant to the landfill near Hatfield’s Ferry, another power plant that FirstEnergy owns in Greene County. Hatfield’s Ferry closed in 2013.

But the Sierra Club and Earthjustice sued the DEP and FirstEnergy to stop the shipment of waste to Hatfield’s Ferry, over fears that the waste would pollute the nearby Monongahela River, a drinking water source for hundreds of thousands of people in southwestern Pennsylvania.

Coal ash contains mercury, cadmium and arsenic, and can pollute waterways, groundwater, and drinking water, and air, according to the EPA.

Most of Bruce Mansfield’s coal ash is now taken to a coal mine in Moundsville, West Virginia. Some of the coal ash is recycled into drywall, according to the company.

The agreement calls for several steps designed to minimize infiltration of rainwater and snowmelt at Hatfield’s Ferry. These steps include closing a part of the landfill and installing a “cap” of soil and vegetation. The company will also regrade and reseed areas of the landfill that have degraded as a result of erosion to prevent water from forming ponds on the landfill.

“All these things will help prevent rainwater from infiltrating the landfill and contacting groundwater below,” McPhedran says.

Groundwater infiltration of coal ash contaminants was one reason Little Blue closed last year. The largest coal ash impoundment in the country, Little Blue was closed as part of a 2012 consent agreement
FirstEnergy signed with the DEP. In a related complaint, the DEP charged the impoundment presented “an imminent and substantial endangerment to health or the environment” because contaminants from the unlined impoundment were entering the groundwater beneath it.

In April, FirstEnergy announced it sold part of the Hatfield’s Ferry power plant site to a company that will build a natural-gas powered plant.

Al Gore: We're Getting Close to Bipartisan Action on Climate