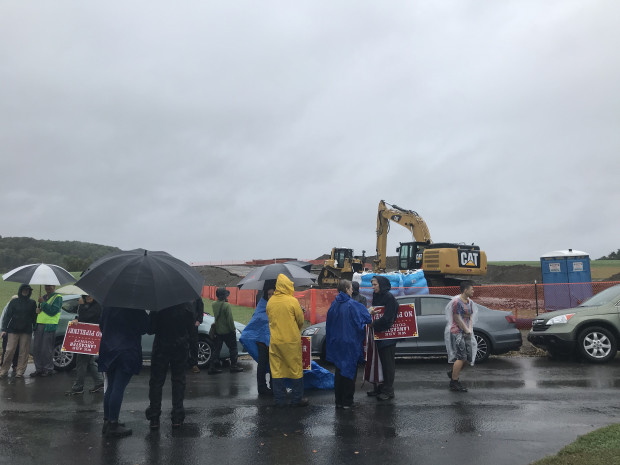 Protesters parked cars along Witmer Road in Manor Township to block access to a work site for the Atlantic Sunrise natural gas pipeline.

Anti-pipeline activists in Lancaster County formed a vehicle blockade Monday that temporarily obstructed access to a work site for the Atlantic Sunrise Pipeline.

Protesters parked 16 cars along Witmer Road in Manor Township to impede workers’ access to a horizontal directional drill site where the pipeline builder, Williams, intends to install the line under the Conestoga River.

About 20 people from the group Lancaster Against Pipelines participated in the protest, which began shortly before 7am.

“The objective is to slow down this process and make everyone watching aware that this is not something the county wants, ” says Lori Ann Neumann. “We have been failed by our legislators, the courts, regulatory commissions.”

The group dispersed around 10am at the request of law enforcement. No one was arrested. Brett Hambright, a spokesman for the Lancaster County District Attorney’s Office called the protesters, “cooperative and respectful.”

As StateImpact Pennsylvania previously reported, police are expected to have a near constant presence during pipeline construction in Lancaster County. The project has been a lightning rod for controversy since it was first announced in 2014. Law enforcement agencies, including local and state police, have been meeting since the spring to coordinate.

Williams has hired an undisclosed number of private security personnel. A man driving an SUV with the logo, American Pipeline Security, declined to comment on his role Monday.

“We respect the rights of people to protest, but our focus remains on constructing this important, federally approved infrastructure in a safe, efficient manner,” Williams spokesman Chris Stockton writes in an email. “We will continue to coordinate with local and state authorities to ensure protestors, construction personnel and our employees are protected during the construction process.”

The $3 billion line is part of a broader network of controversial new natural gas infrastructural projects being built throughout the Northeast to connect gas production in the Appalachian Basin to new markets within the U.S. and abroad. When completed, the line will go through 10 Pennsylvania counties, carrying natural gas southward.