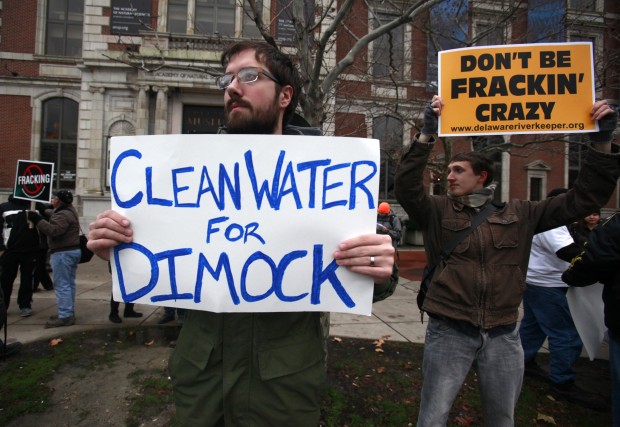 Two Pennsylvania families have settled a lawsuit against a major natural gas producer, ending an almost decade-long fight over alleged water contamination in the northeast Pennsylvania town of Dimock.

The families were among 15 who sued Cabot Oil & Gas in 2009, claiming that fracking for natural gas had contaminated their drinking water wells in the area, known as a “sweet spot” of the Marcellus Shale for its rich gas reserves. All but two of the families previously settled.

The two remaining families went to trial and won a jury award of $4.24 million in March 2016. The jury determined that Cabot had been negligent.

The verdict was hailed as a major victory for critics of the gas industry, but it was overturned in March this year by the trial judge who said the award bore little or no relation to the evidence presented. He ordered a new trial, but also told the parties to first seek a settlement.

The plaintiffs in the new settlement, which was reached on Sept. 21, are Nolen Scott Ely, Monica Marta-Ely and their three minor children, and Ray Hubert, Victoria Hubert and their adult daughter, Hope Hubert.

Leslie Lewis, attorney for the families, declined to provide details of the settlement and said her clients were not willing to comment, but said were they happy with the award.

“The settlement is final,” Lewis wrote in an email. “After nearly a decade, the plaintiffs are happy and relieved to have these past litigated matters behind them.”

Scott Ely did not return a phone call seeking comment, but his neighbor, Pat Farnelli, said water from her well is still not drinkable more than a decade after signing a lease agreement with Cabot to drill on her land.

“We’re hauling water every week from a spring in Montrose,” Farnelli said, referring to a nearby town. She said she and her family still use well water for laundry and dishes, but that her daughter can’t bathe in it because it causes inflammation of her skin.

“We thought we had this huge financial opportunity knocking on our doors and no one realized that it was going to affect our water,” Farnelli said, referring to the lease agreement.

Farnelli was among the 15 homeowners who sued Cabot, and was one of those who previously settled. She declined to disclose the terms of her settlement.

The company has racked up more than 130 drilling violations from state regulators at its Dimock wells, but insists the methane migration in Dimock water wells is naturally occurring, pointing to tests taken after drilling had been halted in the area.

Under the Rendell Administration, DEP cracked down hard on Cabot. The agency fined the company $120,000 for the methane migration incidents, barred it from drilling within the Susquehanna County community and ordered it to foot the bill for a pipeline to bring water to Dimock residents. The new water line was never built. Cabot agreed to pay for temporary water supplies at the affected homes. Those deliveries were later halted.

George Stark, a spokesman for Cabot, said, in response to the new settlement: “The case has been settled. The matter is now closed.”

Dimock became a poster child for how some rural communities were affected by natural gas drilling during the early years of the shale boom when it was featured in Gasland, an anti-industry documentary by the producer Josh Fox.

Fox said Tuesday that the families who sued Cabot wanted to show that fracking was a destructive process: “They didn’t care about money — they wanted justice,” he said. “And they got justice. I think they showed the world that this process is extraordinarily destructive to the environment.”

This story has been corrected to change the date of the settlement to Sept. 21, not Sept. 22, reflecting new information from the plaintiff’s attorney.