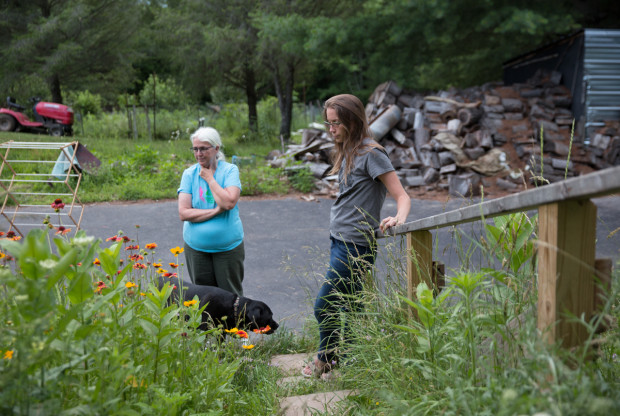 Ellen (left) and Elise Gerhart have been battling with Sunoco Logistics over the construction of the Mariner East 2 pipeline on their property in Huntingdon County, Pennsylvania.They filed a federal lawsuit on Monday accusing Sunoco and its parent company Energy Transfer Partners with violating their constitutional rights.

Four opponents of the Mariner East 2 pipeline sued Sunoco Pipeline and its parent, Energy Transfer Partners, in federal court on Monday, alleging the company violated several constitutional rights when police arrested the plaintiffs on a private property in Huntingdon County.

The suit accuses Sunoco, plus a private security firm, a publicist, and 27 state and local police officers of violating constitutional protections over free speech, false arrest, malicious prosecution and equal protection when the plaintiffs were arrested on the property owned by the Gerhart family in March 2016.

The claims stem from a confrontation between the Gerharts and their supporters, and Sunoco and law-enforcement officers on March 29, 2016 when a tree-cutting crew entered an easement that the company obtained through eminent domain on the Gerharts’ land to build the pipeline.

The day before the incident, the Huntingdon County Court of Common Pleas ordered that no-one may interfere with Sunoco’s work on the easement, including the cutting of trees.

A 36-page complaint filed in U.S. District Court for the Middle District of Pennsylvania says the company entered the property almost a year before the final state permits were issued for pipeline construction, and before it was allowed to do so under a “writ of possession” issued by a state judge in April this year.

Officers arrested the co-owner of the 27-acre property, Ellen Gerhart, plus her daughter Elise Gerhart, and protesters Alex Lotorto and Elizabeth Glunt, the complaint says. Lotorto did not enter the easement and did not interfere with the work going on there but was handcuffed and detained for three days before being released without charge.

Glunt briefly entered the easement to warn police officers that there were other protesters sitting in trees and that their lives would be in danger if the trees were cut down, the complaint says. She was arrested and detained for less than 24 hours, when she was strip searched and then released without charge.

Ellen Gerhart was arrested after trying to warn tree-sitters that they were in danger from nearby tree cutting, but she did not enter the easement, the complaint says. She was charged with disorderly conduct and indirect criminal contempt, and released on $5,000 bail. The charges were later dismissed.

Elise Gerhart was the only one of a number of tree-sitters at the site — known as Camp White Pine — to be arrested. She was charged with disorderly conduct, which was later dismissed.

The police arrested Elise Gerhart in an attempt to make an example of her, the complaint says.

The officers “did so not in the pursuit of justice but to arbitrarily and maliciously send a message to the Gerhart family and their supporters to discourage their opposition to the pipeline and its construction and thereby chill their First Amendment rights,” it says.

Rich Raiders, an attorney for the plaintiffs, said he was unaware of any other suit in which opponents of Mariner East 2 have claimed their constitutional rights are being violated by the project.

The suit also accuses the defendants of violating several Pennsylvania laws including invasion of privacy and trespass. The plaintiffs, it says, suffered harm including deprivation of liberty and emotional distress. It asks the court for a declaration that the defendants violated the plaintiffs’ constitutional rights, and seeks damages.

The defendants include TigerSwan, a private security firm hired by ETP/Sunoco to conduct “surveillance, monitoring, social media engagement, and counter-intelligence” on the Mariner East 2 protestors, as it did with the controversial Dakota Access Pipeline, another ETP project, in North Dakota in early 2016.

TigerSwan obtained business licenses in Pennsylvania, Ohio and West Virginia in late 2016, and has been monitoring public opposition to Mariner East 2, the complaint says.

The security firm, plus a publicist named Nick Johnson, are responsible for falsely claiming on Facebook that Elise Gerhart and her associates are fronts for the Russian government which is trying to disrupt U.S. energy production because it fears its own share of world energy markets will drop, the complaint says. 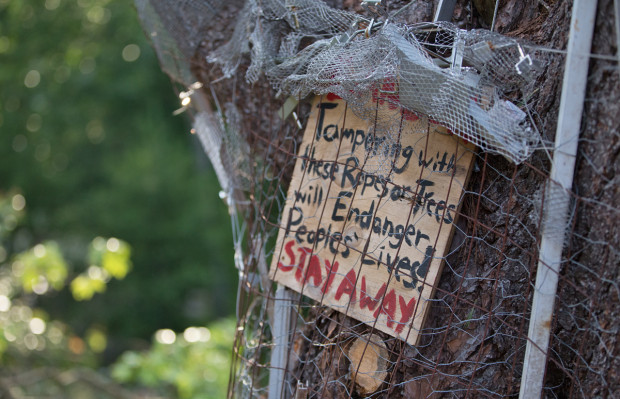 A sign on the trunk of a tree at Camp White Pine in Huntingdon County, Pennsylvania.

The web site of North Carolina-based TigerSwan says its services include “in-depth analysis of cyber, workforce, electronic and environmental security threats.” A spokesperson did not immediately respond to a request for comment on the lawsuit.

According to the complaint, Johnson appears in videos under different pseudonyms, accusing the pipeline opponents of being anarchists who are “planning a direct action against the state of Pennsylvania.” One of the videos is posted on a Facebook page called PA Progress, which the plaintiffs say is run by TigerSwan and/or Johnson, on behalf of ETP.

The claims of Elise Gerhart’s collusion with Russia are made on a website called blackbadgereport, which also seeks to discredit a report by the investigative news site The Intercept that in June drew parallels between ETP’s efforts to control the North Dakota protests, and its monitoring of opposition to Mariner East 2.

The lawsuit is the latest challenge to the more than $2.5 billion project. In July, some private well owners experienced cloudy water after drilling punctured aquifers, and dozens of spills of drilling fluid at various places along the line, prompting a court to order a temporary halt to drilling. Some communities in the western suburbs of Philadelphia continue to argue that the line poses a grave risk to public safety in densely populated areas.

Sunoco insists that the line will be safe, and meets all state and federal safety standards.

The line, which is now due for completion in the fourth quarter, will carry natural gas liquids from the Marcellus Shale of southwest Pennsylvania across the state to an export terminal at Marcus Hook near Philadelphia.

Sunoco spokesman Jeff Shields said the company does not comment on pending litigation but that it does not try to suppress opposition to the pipeline.

“We respect everyone’s right to peacefully and lawfully express their opinion,” Shields said. “We will continue to do so, and to abide by the law, as we complete construction of the Mariner East 2 project.”

Shields said in August that Sunoco has no affiliation with the PA Progress Facebook page.

A spokeswoman for the Pennsylvania State Police said the department does not comment on pending litigation.

This story has been updated with comments from Sunoco.