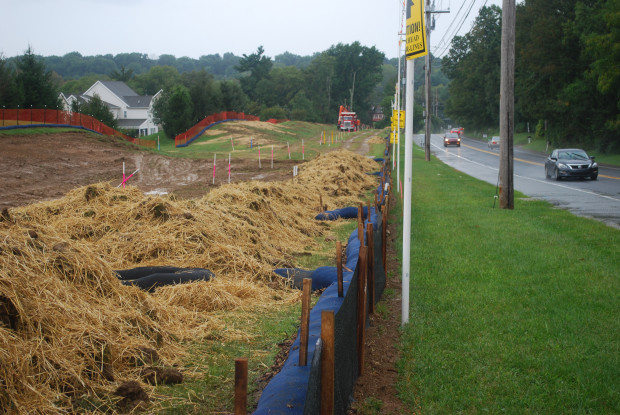 An easement where Sunoco Pipeline is preparing for construction of the Mariner East 2 pipeline. A homeowners group is asking a court to halt construction in that location until Sunoco comes up with a plan to mitigate contaminated soil on the site.

A Delaware County homeowners association is asking an appeals court to halt local work on the controversial Mariner East 2 pipeline until its builder, Sunoco Pipeline, finds a way to stop disturbance of contaminated soil at the site.

The Andover Homeowners Association in Thornbury Township says construction on the edge of its upscale 39-home development is stirring up contaminants including lead and arsenic that were used as pesticides when the land was an orchard, and which now threaten residents’ health.

The association argues that the Environmental Rights Amendment of the Pennsylvania Constitution, as recently interpreted by the state Supreme Court, establishes that government at all levels has a responsibility to protect the health and welfare of its citizens and the state’s natural resources.

But it complains that it has had no help from two state agencies and the local township in seeking to control the alleged contamination.

The complaint, filed in Commonwealth Court on Monday, says the state’s Department of Transportation – which issued a grading permit for the project — did not require Sunoco to mitigate any air or water contamination in doing the work.

PennDOT’s permit allows Sunoco’s trucks to spread contaminants into the air and water by driving in and out of the construction site, spreading soil along nearby roads, and allowing it to mix with storm water, the complaint says.

PennDOT spokesman Brad Rudolph said the department issued a highway occupancy permit for driveway access to the state highway only, and not for the pipeline or any other work.

But as a condition of the permit, the holder must comply with state and federal laws and regulations, include environmental rules, Rudolph said.

The association also says it asked the Department of Environmental Protection to help resolve the issue but received no response.

DEP attorney Margaret Murphy indicated in public comments last week that DEP’s response to such claims of environmental damage would be no different than it was before the Supreme Court’s landmark ruling in the Pennsylvania Environmental Defense Foundation case in June.

“We’ve been thinking about this for a long time,” Murphy said during a seminar on the Environmental Rights Amendment, held in Philadelphia by the environmental group PennFuture. “We’ve been doing this work. It doesn’t change what we do.”

Murphy said the court’s PEDF ruling, together with its landmark Robinson Township ruling in 2013, had shown that the legislature “missed the mark” by passing some laws that did not meet the requirements of the Environmental Rights Amendment.

But the rulings won’t affect DEP’s approach, she said. “We’re doing the work of a trustee under Article 1 Section 27. We’re administering those laws.”

Meanwhile, the homeowners say they can’t take their complaint to Thornbury Township because it has no authority over soil contamination.

Only Sunoco can “abate” the release of contaminants, and its work on the pipeline should stop until it satisfies state and local authorities that it has a credible plan for doing so, the complaint says.

“Permittee’s willful conduct in not engaging in adequate control of known contaminated soils is a direct and willful violation of law and constitutes a willful interference with the health, safety and welfare of the Andover community, neighbors and the general public,” the complaint says.

The residents say the pipeline will pose a grave risk to public safety because it will carry highly explosive natural gas liquids a few yards from some of their houses. Sunoco used eminent domain to obtain an easement for the pipeline on about three acres of open space owned by the township.

Over Labor Day weekend, contractors at the site called police after a handful of residents walked into the easement, claiming they were merely walking on their own property to monitor the work going on there, and that they have a right to be there as long as they are not interfering with work.

“We are in compliance with all local, state and federal requirements in place to protect our workers, neighbors and the environment, and those are our priorities as we proceed with construction,” Shields said in a statement. “Beyond, that we do not comment on issues related to pending legal matters, per our company policy.”

The association is asking the court to issue a preliminary injunction to stop pipeline construction in that location until a contamination-control plan can be agreed.

Mariner East 2, scheduled for completion in the fourth quarter, will carry ethane, butane and propane some 350 miles from southwest Pennsylvania to an export terminal at Marcus Hook near Philadelphia.

Susan Phillips contributed to this story.

This story has been updated with comments from PennDOT and DEP.