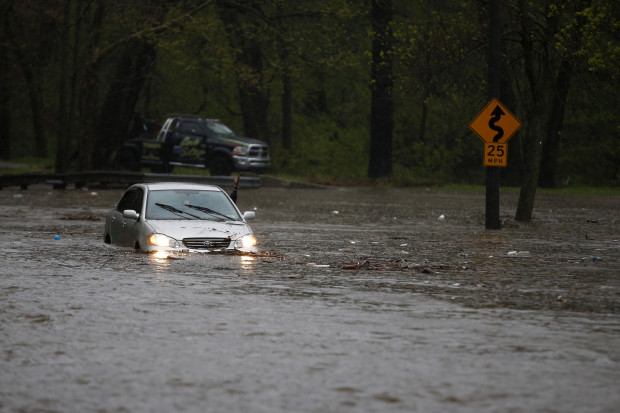 Experts and city authorities say it’s unlikely for Philadelphia to experience a hurricane of Harvey’s magnitude, but parts of the city have been flooding for more than 20 years. And those rising waters are tied to some of the same reasons Houston has been inundated: paving over wetlands.

Janis Pugh, a longtime resident of Eastwick, said rain stresses her out. Her Southwest  Philadelphia neighborhood has flooded at least 10 times since Hurricane Floyd in 1999, causing severe damage to 130 properties.

“When it starts raining, everybody gets a little nervous,” Pugh said.

Eastwick was built in the 1960s as part of an urban renewal project that replaced a semi-rural area called the Meadows. The neighborhood is in a high-risk flooding zone, within FEMA’s Special Flood Hazard Area (SFHA) or 100-year-floodplain. And, because it has the lowest elevation in the city and was once a vast marshland, when seasonal snow melts and when it rains, water naturally flows into the area.

When grassy areas and the Tinicum Marsh were there, it was perfectly suited to absorb runoff and flood waters. But now, when Cobbs Creek overflows during a heavy storm, water has nowhere to go but into people’s homes.

“It comes so fast, you can’t even think. It’s like a wave, like an ocean,” Pugh said. “They bring in boats to take people out. And people, you lose your car, the water is over top of your car.” 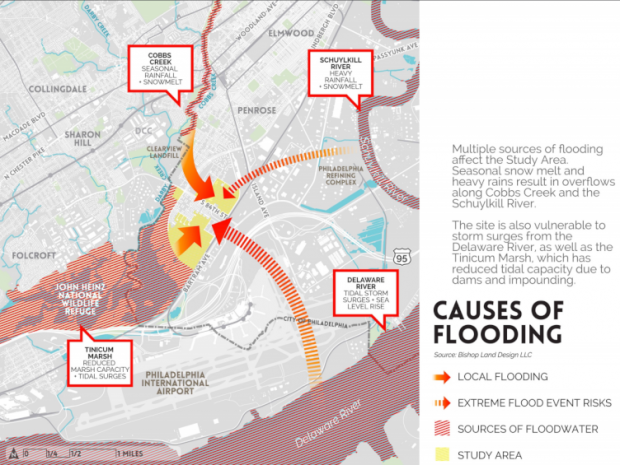 Multiple sources of flooding in Eastwick.

Scientists and design professionals from the Lower Darby Creek Area Research Team in Philadelphia are working with researchers from different universities in the Consortium for Climate Research in the Urban Northeast (CCRUN) to explore flood mitigation strategies for Eastwick with the community.

Franco Montalto is an environmental engineering professor at Drexel University and part of CCRUN. He says Philadelphia is adjacent to multiple waterways, such as the Delaware and Schuylkill rivers and its tributaries, and water naturally wants to flow into these low-lying areas.

“When you put development on top of those coastal wetlands, that development is destined to still receive the water that it would have received if it wasn’t developed,” Montalto said. “And the question becomes, what do we do in these areas? We’re not going to pick up Philadelphia and move it away.”

Philadelphia has already endured storms with massive precipitation — including Hurricane Irene in 2011, which created severe downstream flooding. The city has also experienced upstream flooding caused by storm surge with Superstorm Sandy in 2012. But Philadelphia has not had both kinds of extreme floods at the same time, which is what happened with Harvey.

“What’s really scary is when all those things happen together, and you get surge and a lot of precipitation and the water just really has nowhere to go,” Montalto said. “And if you are in a place where there’s not a lot of topographic relief, you know a place like Eastwick, it will create a cover of water over the landscape.”

Montalto and CCRUN’s Stevens Institute of Technology researcher Firas Saleh has been developing a model that simulates precisely that scenario. That information could help urban planners and designers figure out how communities can adapt and minimize flood disruption if it happens, Montalto said. And that is what they’re doing in Eastwick, where the community is leading a one-year planning process to decide the future of 189 undeveloped and publicly owned land in the neighborhood.

Sarah Wu, a climate preparedness expert from Philadelphia’s Office of Sustainability, said the city has emergency plans — in coordination with the Office of Emergency Management and the police department — in the event of dramatic flooding on the scale of Harvey.

But because Philadelphia’s climate, water temperature, and landscape are very different from Houston’s, Wu said it’s hard to imagine this region will have anything like the massive dislocation of people caused by Harvey.

Harvey was a Category 4 hurricane, and in the last 100 years since the weather was systematically recorded, Philadelphia has never experienced a storm stronger than a Category 1. Wu said the wettest day in Philadelphia happened in 2013, with 8 inches of rain. And even if climate projections call for more rain in this region, Wu said the city probably won’t see 50 inches in five days the way Houston did.

“Fifty inches of rain is about how much rain we’re projected to see on an annual basis, even with relatively high carbon emissions scenarios,” Wu said.

Houston is a city with virtually unlimited development, few environmental regulations, and no zoning. Stevens Institute of Technology’s Saleh told CNBC that since 2010, more than 900,000 massive building in the 100-years-floodplain, a region that housed wetlands and prairies that used to serve as natural sponges. The widespread devastation was somehow predictable as this collaboration between ProPublica and the Texas Tribune reported last year.

But even if we’ve never seen storms like Harvey in Philadelphia and the city has implemented some flood mitigation strategies and emergency planning, climate change is forcing us to plan for the unthinkable.

“Throughout the whole 20th century we’re saying, ‘Well, we’ve looked at 50 years of [historical] data, this [extreme] situation never arrived, we’re certain this won’t arrive, so we’re going to build things this way,’” Montalto said. “What climate change has sort of started us to think about is that … sometimes looking [only] at the past is not necessarily what we should be doing.”

Will Philadelphia get a Category 4 hurricane with 50 inches of rain in five days? Probably not. But rising seas and increased precipitation mean the city’s streets will likely see more flooding.