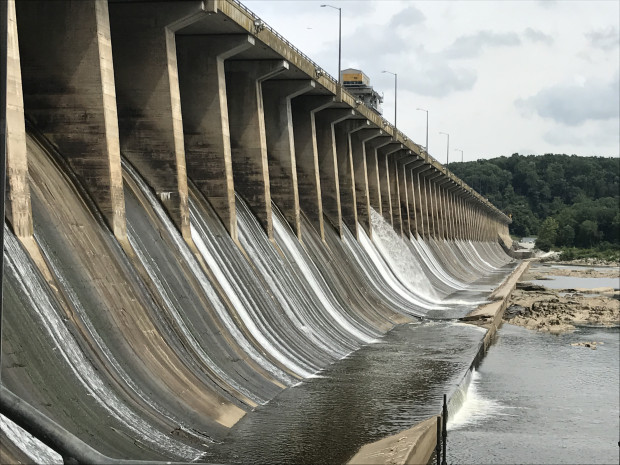 A decades-long effort to clean up the Chesapeake Bay, the nation’s largest estuary, is showing signs of success. But scientists now say progress could be hindered by a hydroelectric dam, located on the Susquehanna River in northern Maryland.

The Conowingo Dam has been holding back pollution for nearly a century, but recent research shows it has filled up with sediment faster than expected.

“It’s now at a point where it’s essentially, effectively full,” says Bill Ball, director of the Chesapeake Research Consortium. “The capacity’s been reached.”

In 2010, the Environmental Protection Agency imposed strict new pollution limits on state and local governments in the bay watershed to sharply curb nitrogen, phosphorous and sediment by 2025. It was believed the Conowingo Dam would continue trapping sediment until then.

As the science around the sediment buildup has become clearer, Maryland responded this month by announcing a $4 million pilot program to dredge behind the dam.

“If you don’t deal with the sediment problem, you’re going to have a really hard time meeting the more aggressive cleanup goals,” says Ben Grumbles, secretary for Maryland’s Department of the Environment.

Sediment is not the only problem, he says. Controlling pollution before water even reaches the dam is critical. But Grumbles says dredging is so important, the state might veto the pending application by dam owner Exelon to relicense the dam, if the company doesn’t do enough to find a solution.

“Our state has a once-in-a-lifetime opportunity to make sure, that as Exelon seeks a 46-year renewal of its license, that the state uses its ability to negotiate with them, ” says Gumble.

Colleen Hicks, a licensing and regulatory manager for Exelon says the company supports efforts to find long-lasting solutions to deal with the sediment issue.

“Exelon is a member of the Chesapeake Bay community,” she says “We continue to work with Maryland and other stakeholders.”

If the state calls for a larger-scale dredging operation, it’s unclear how much of the tab the company would have to pick up.

Andy Miller, a professor at the University of Maryland Baltimore County, says this problem goes back centuries.

“We can’t simply assume we’ve got a spigot that we can turn off, or not turn off, by virtue of dredging,” says Miller.

In fact, research shows at one point, farming and deforestation caused so much sediment to wash downstream, it added nearly 800 acres to Maryland. Miller says a major dredging operation now would be an expensive and temporary solution.

“You’ve bought yourself a short period of time, after which you’ll be back in the same boat,” says Miller. “That to me, is not necessarily money well spent.”

Besides the federal government, there are six states, and the District of Columbia all working together to curb pollution from the 64,000 acre watershed.

While the Conowingo Dam is important, Ball says it’s only one piece of a very big puzzle.

With sediment now washing over the dam regularly, that political question has become a pressing matter.