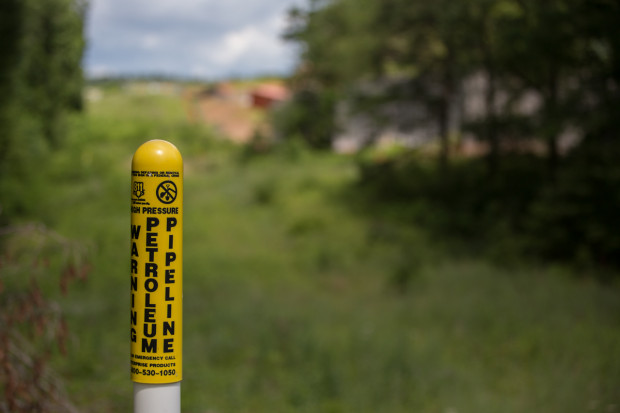 A stake in the ground marks a pipeline at Raystown Lake Recreation Area in Huntingdon County, Pennsylvania.

Sunoco has offered residents of West Whiteland Township, who had their well water tainted by a pipeline drilling accident earlier this month, lump sum payments in exchange for signing a release that would prevent them from suing the company with regard to any current or future damages related to impact to well water resulting from any current or future, pipeline construction.

The deal, obtained by StateImpact and published below, offers $60,000 to each household that decides to hook up to a public water supply. Included in that payment would be coverage for residential water bills for 20 years and a filtration system. The company would also cover the costs of hooking up the house to Aqua’s public water supply.

Those who decide to remain on their well water would get $11,000 up front, but retain the risk of any future impacts to their well water, including those that may occur from Sunoco’s construction of additional natural gas liquids pipelines through the area.

Sunoco is building the Mariner East 2 a natural gas liquids pipeline across the state, which will cross hundreds of waterways and wetlands. The company has plans to build a third pipeline that would parallel Mariner East 2.

Their drilling operations in Chester County contaminated an aquifer over the July 4 holiday weekend, and Sunoco has since been supplying bottled water to at least 14 households. Records now indicate the company has had at least 49 such spills since May. On Monday a judge ordered Sunoco to halt horizontal directional drilling at 55 sites across the state.

Ben Eckert, a resident who experienced cloudy water after Sunoco released drilling mud into the aquifer that supplied his well, says he found the offer better than he expected.

“They came to our house and broke something, and now they’re trying to fix it,” he said. Eckert said he thought most residents would accept the offer but were checking with their lawyers. He says his well water has since cleared up with the use of a new filter.

But not everyone thinks it’s such a great deal.

“It’s a joke,” said David Mano, who also lost his well water due to Sunoco’s drilling. “But I don’t know what to do.”

The offer was presented to residents at a meeting Wednesday night, which Mano says was attended by representatives from Sunoco and their subcontractor Percheron.

Environmental attorney Rich Raiders, who is not representing any of the residents at this time, agreed. He said it was an ok starting point for residents interested in negotiating a settlement. But they may be looking at future damage to their plumbing and appliances down the road if they switch to public water.

That’s because water sources have different chemistry, and introducing a new water source could react with deposits left by the former water source and cause damage.

“You’ll have your appliances rot, and you’ll have to replumb your house,” Raiders said. “They’ll lose the seal on their washing machine, and dishwasher. And that damage could show up years from now.”

Sunoco gave the residents until September 15 to take advantage of the offer.

The company also filed a motion with the Environmental Hearing Board on Thursday, seeking to restart drilling at 17 locations. An affidavit from their senior engineer, David Runte, explained that those sites were at risk of collapse if the work is left undone. He said it would risk causing “more environmental harm than good.”