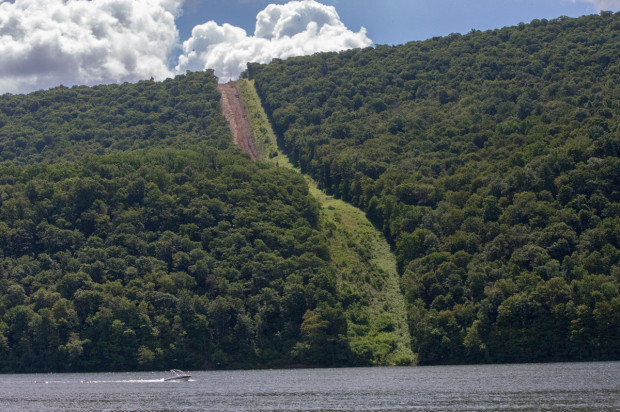 State permits for projects like the Mariner East 2 pipeline, seen here in Huntingdon County, could be outsourced to private contractors under new amendments to the 2017-18 budget.

The Pennsylvania Senate on Thursday approved a package of budget measures that includes a startling plan to speed up state approval of environmental permits by outsourcing reviews to third parties.

The Senate passed by 26-24 a series of amendments designed to end a month-long budget stalemate by providing revenue to pay for a $32 billion spending plan for the current fiscal year that was approved at the end of June.

The package included a plan to reform the Department of Environmental Protection by appointing third-party contractors to review all permit applications, including those from the oil and gas industry.

The amendments to HB 542 direct the DEP to “contract with third party licensed professionals for the purpose of administering the permit program” within two years of the bill becoming law. The amendment defines qualified professionals as geologists, engineers, land surveys, and landscape architects.

The measures also call for a new air quality advisory panel, whose members would be appointed by the legislature and the governor, and which would have veto power over oil and gas regulations such as those reducing emissions of methane, a powerful greenhouse gas.

Supporters say the plan to reform DEP permitting would reduce delays to applications that add to expenses for the oil and gas industry, and argue that the law would continue to provide the same level of protection for the environment even when permit review is handled by a private-sector contractor.

But critics were aghast at the idea that permit applicants could ask for their permits to be considered by an outside contractor, and said the measure was an unprecedented assault on an agency that has already been weakened by years of budget cuts.

“Practically speaking, these amendments gut the function of the DEP, and effectively destroy its purpose and mission,” said John Quigley, the last DEP Secretary, who was fired by Gov. Tom Wolf in 2016. “They are incredibly bad and dangerous ideas.”

Quigley said the measures would subject environmental regulation to political influence and manipulation by non-experts. He said the plans should be challenged on constitutional grounds, and may violate state and federal laws.

Another former DEP Secretary, David Hess, said the idea of outsourcing permit review was not new among conservative members of the legislature and had previously been rejected but the current version went further than before.

“This proposal is so far away from the norm that it is almost incomprehensible and, I think, irresponsible,” said Hess, who was DEP Secretary under Republican Governors Ridge and Schweiker from 2001 to 2003.

He said the bill has no provisions on conflict-of-interest or ethics; no requirement for public participation, and no provisions for appeal.

“It’s just something that was put together fairly quickly with no thought whatsoever for how you run a permit program,” Hess said. “It emasculates DEP’s ability to run an environmental program.”

He predicted that federal agencies such as the Department of the Interior that rely on the DEP to regulate programs in Pennsylvania are unlikely to agree to the addition of private contractors to the permit-approval process.

“There are simply too many holes in what they wrote to simply be an effective program,” he said.

Hess said he didn’t know of any other state that has outsourced environmental permits reviews in the way proposed by the budget measure.

But Drew Crompton, chief of staff to Republican Senator Joe Scarnati, who supported the amendments, said existing environmental protections would not be undermined if private contractors helped to issue permits.

“I don’t think there will be any infringement of environmental protections,” Crompton said. “This is to ensure that those who should properly get a permit in due course get one.”

This week, DEP has faced renewed criticism from the public and some lawmakers for lax oversight of Sunoco Pipeline’s Mariner East 2 project, which has resulted in dozens of spills of drilling fluid during construction, and a handful of violations issued by the department. The spills led a judge to halt horizontal directional drilling across the state for two weeks, pending further arguments on the issue, and a legal challenge to DEP’s permits on the project.

Earlier this year, critics accused DEP of issuing permits for Mariner East 2 even though deficiencies remained in Sunoco’s application.

Crompton said the measures are designed to speed up the review of permit applications, and to take some of the work load off the agency, especially for larger projects. He said the contractors would act as “surrogates” to the DEP. He said it took Sunoco’s application a year and a half to be approved by DEP.

If the amendment becomes law, the DEP will spend the next year selecting contractors with expertise in fields such as air and water quality, Crompton said. Applicants will be able to say they want their case decided by a contractor but will not be able to select the contractor; that will be done over the next year by DEP, based in individual expertise, he said.

The measures were proposed by Senate lawmakers in partial exchange for agreeing to a severance tax on natural gas production that would raise $100 million a year, helping to plug a $2 billion budget deficit. The tax has been repeatedly proposed by Gov. Tom Wolf but previously rejected by the Republican-controlled legislature.

“We wanted to fix the permit problem if we were to contemplate a severance tax,” Crompton said. “I wouldn’t call it a bargaining chip but I would say that it’s fair balance inside the legislation.”

Though it may benefit from permit review by DEP contractors, the gas industry again criticized the severance tax, and called on the state House to reject it.

“This punitive tax hike isn’t about paying one’s fair share or doing one’s part; the natural gas industry alone has paid over $1.2 billion in impact taxes since 2011, the bulk of which goes to local governments,” said Stephanie Catarino Wissman, executive director of the American Petroleum Institute in Pennsylvania. “The real impact is on Pennsylvania families who could be paying much more for living in Pennsylvania if the House doesn’t reject this measure”.

Adam Garber, deputy director of PennEnvironment, called the package a “last-minute end run around the system to try and undermine clean air and clean water protections.”

Garber said it was unclear which legislators instigated the measure because it is part of a package of budget measures that were negotiated late Wednesday behind closed doors.

“On the budget side, a lot of these measures happen in dark rooms where the public don’t get to see who is pushing which pieces,” he said. “Somehow they have agreed this is the way to move forward on the tax code.”

Gov. Tom Wolf is expected to support the amendment package. His spokesman, Mark Nicastre, would not say whether the Governor backs the measures but pledged that environmental protections would not be weakened by “any potential changes” in DEP’s operation.

“The Department of Environmental Protection is resolute in its responsibility to protect our water and air,” he said, in a statement that was repeated by the DEP itself a short time later. “And they are committed to ensuring that there are predictable and fair processes in place for the industry.”

The package is expected to go before the House on Monday, where Democrats seem inclined to support the amendments, and appreciate the “bipartisan” work done by the Senate, said Bill Patton, a spokesman for the party.

This story has been corrected to show that the third-party program would become effective two years, not one year, after the bill becomes law.

Delco's Middletown fires Sunoco contractor because of conflict of interest