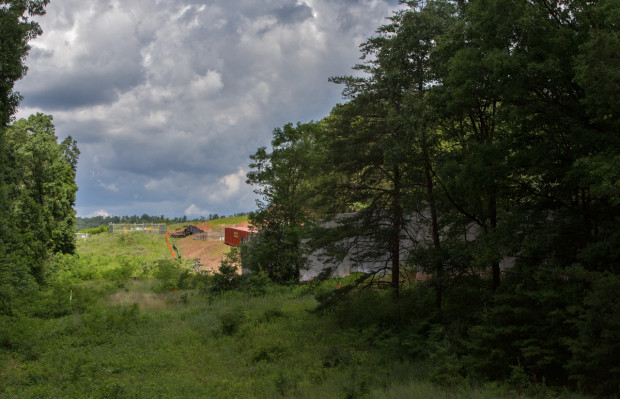 In the distance, construction of the Mariner East 2 pipeline at Raystown Lake Recreation Area in Huntingdon County, Pennsylvania. Sunoco is drilling beneath the lake as part of construction. A judge halted all drilling on the project Tuesday.

A Pennsylvania judge on Tuesday ordered a two-week halt to all drilling for the construction of the controversial Mariner East 2 pipeline after dozens of water contamination incidents and several environmental violations by the builder, Sunoco Pipeline.

Judge Bernard Labuskes of the Environmental Hearing Board suspended drilling until August 7 when a state court will hear arguments from the company and its opponents over whether the suspension should be extended until another hearing on whether to withdraw permits for the $2.5 billion cross-state project.

The judge granted an order of “temporary partial supersedeas” to the Clean Air Council, Delaware Riverkeeper Network, and Mountain Watershed Association which together are challenging the issuance of construction permits for the pipeline by the Department of Environmental Protection.

“The permits that are the subject of this appeal are hereby superseded effective immediately to the extent they authorize the permittee to conduct horizontal directional drilling,” the judge wrote in a one-page order.

However, the judge said the order could be modified if Sunoco submits affidavits explaining why halting drilling would damage equipment, compromise safety, or do more environmental harm than good at the 55 locations along the 350-mile pipeline route where the drilling is taking place during construction. Construction has not yet begun at 168 additional drilling locations.

“We believe that the full hearing before the Environmental Hearing Board will demonstrate that we have expended every effort to meet the strict conditions of our environmental permits,” Shields said. “We are continually evaluating our drilling plans, and had already voluntarily suspended work on a number of our drills while working to ensure that the concerns outlined by the DEP and Gov. Wolf were addressed.”

Attorney Alex Bomstein, with the Clean Air Council, said he was happy to finally make progress in the courts. Cases that have challenged the eminent domain status of the Mariner East 2 pipeline have up until this point, failed. And previous attempts by the Clean Air Council to halt construction while the DEP’s permits are appealed, have failed.

But it appears the judge was swayed this time by the number of drilling mud spills across the state.

“This case has always been about accountability,” said Bomstein, “insuring that Sunoco can’t get away with running roughshod over everybody. And it’s very heartening to see the Environmental Hearing Board provide accountability for Sunoco’s actions.”

West Whiteland Township resident David Mano said he’s happy with the decision. Mano is one of 14 households where well water was impacted by Sunoco’s drilling operations earlier this month and he has since been drinking bottled water and showering at friends homes. Mano says he was surprised to learn his experience was not the first incident where Sunoco’s pipeline drilling impacted surface and ground water.

“How could they have let this happen to begin with, and have all these issues all down the pipeline and everyone just turned their back and let Sunoco have their will,” said Mano. “They should never have gotten [public utility] status, they’re a privately held corporation worth billions of dollars. Why don’t they give the billions of dollars to the public if they’re a public utility?”

The Pennsylvania Public Utility Commission granted utility status to Sunoco based on a decision made in 1932 regarding a pipeline that carried gasoline from Delaware County refineries to rural Pennsylvania. Sunoco purchased that line, reversed the flow, and is now sending natural gas liquids from the western Pennsylvania shale fields to Marcus Hook, Delaware County where it gets exported to Scotland. That line is now called Mariner East 1, the current construction is an expansion of that line.

The EHB order is the latest blow to the more than $2.5 billion project, and comes less than 24 hours after an administrative judge halted construction in Chester County’s West Goshen Township. Late Monday, that judge stopped drilling until a full hearing can be held by the Public Utility Commission, saying that the township had met its legal burden for issuance of an emergency order. The West Goshen order was the first court action to halt work on any part of the natural gas liquids pipeline, which is due for completion by the end of the third quarter.

The court orders follow dozens of water contamination incidents in which Sunoco’s horizontal directional drilling have tainted private water wells and filled wetlands with drilling fluid. Last Friday, DEP said it issued a handful of violations for the incidents and promised to step up enforcement of environmental regulations.

On Monday the DEP entered into a consent decree with Sunoco over the water contamination incident in Chester County. The DEP says Sunoco violated the state’s Clean Streams Law as well as the permit conditions the agency imposed upon the company. There was no fine levied.

State Rep. Leanne Krueger-Braneky, a Delaware County Democrat who recently called for a halt to all Mariner East 2 construction, said: “Today, the Environmental Hearing Board has heard the concerns of nearby neighbors in Delaware County and across the Commonwealth. It is clearly time to address the repeated leaks by Sunoco and Energy Transfer Partners.”

Sunoco recently merged with Energy Transfer Partners, the company behind the controversial Dakota Access pipeline, and the Rover pipeline, which contaminated a wetland in Ohio and was shut down by federal authorities.

“What we cannot understand, and what we reject is that the state and the pipeline companies have not proceded to do this in a way to protect our health and safety and our environment,” he said.

Dinniman says the Pennsylvania Department of Environmental Protect has not done enough to enforce the rules and issued the drilling permits pre-maturely. He wants the full Environmental Hearing Board to continue the drilling ban at the hearing on August 7.

“Residents living along the route of the pipeline have been assailed over the last few months by drilling spills and damage to water wells and water quality due to Sunoco’s reckless drilling,” said Joseph Otis Minott, Executive Director for Clean Air Council. “Today’s decision provides residents with much-needed protection over the next two weeks.”

Food and Water Watch, which has been trying to organize community opposition to the pipeline, said: “Sunoco’s spill record so far tells us all we need to know about the company’s regard for the safety of Pennsylvanians, our environment and our water.”

FWW said it would mobilize “thousands” of residents to argue against the pipeline in the two weeks before the drilling ban is lifted.

This story has been updated with comments from Sunoco.