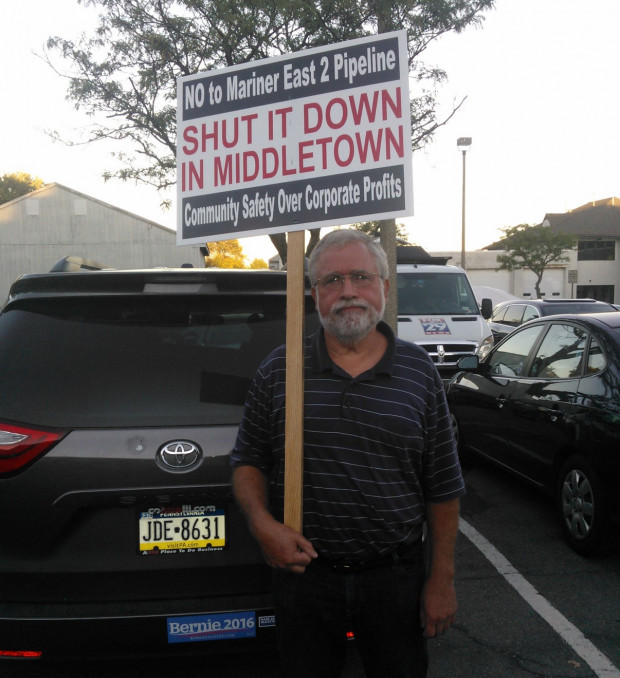 Mitch Trembicki, a Middletown opponent of Sunoco's Mariner East 2 pipeline project, which is subject to a risk assessment by a Sunoco contractor..

Delaware County’s Middletown Township is hiring a Sunoco contractor to do a risk assessment of the company’s plan to build the Mariner East 2 pipeline through the community, prompting critics to accuse the township of using a contractor with a conflict of interest.

Mark Kirchgasser, chairman of the township’s Board of Supervisors, confirmed that it has agreed with Det Norske Veritas (DNV-GL), a Norway-based consultant to energy and other companies, to assess the risks of Sunoco’s planned pipeline in the town.

DNV last year helped defend Sunoco against federal charges that it used unqualified welders and unauthorized welding procedures on a Texas pipeline, Permian Express II, leading to a spill of more than 300,000 gallons of hazardous liquids, according to documents from the Pipeline and Hazardous Materials Safety Administration.

Last month, the contractor was fired by the state of Michigan for performing a risk assessment on a pipeline being built by the energy company Enbridge while simultaneously working for that company on another project.

Sunoco spokesman Jeff Shields confirmed that the company continues to work with DNV, but declined to comment on the Texas pipeline case.

The 350-mile Mariner East 2 pipeline, which is due for completion by the end of the third quarter, will carry propane, ethane and butane from the Marcellus Shale of southwest Pennsylvania to an export terminal at Marcus Hook near Philadelphia.

The $3 billion project has been beset by community, legal, and environmental challenges, most recently because of water contamination caused by its drilling into aquifers, and drilling mud spills into streams and wetlands, in at least 61 locations across the state during construction, according to documents obtained from the Department of Environmental Protection this week.

In Middletown, critics say the pipeline would pose a grave risk to public safety because of the risk of leaks and explosions in the densely populated suburbs west of Philadelphia.

Assessing that risk should be done by an independent party rather than one whose credibility is called into question by its work with Sunoco, opponents say.

“It is critical that this risk assessment be unbiased and independent,” said Eric Friedman, a member of the Middletown Coalition for Community Safety, a group that has been a persistent critic of both Sunoco and the township’s management of the pipeline controversy.

“Merely associating with Sunoco does not immediately render a vendor’s work untrustworthy,” Kirchgasser wrote in an email.

He said Sunoco required township officials and DNV to sign a non-disclosure agreement preventing publication of any confidential information gathered by the contractor during the risk assessment.  Sunoco will review the DNV report when it is completed in mid to late August but will not be allowed to alter or edit it, Kirchgasser said.

The DNV report will be the second risk assessment on the controversial pipeline project for Middletown this year. The first was done for MCCS by Quest Consultants, an Oklahoma company that was originally scheduled to do the work for the township but was then hired by the community group after the board of supervisors delayed action on the assessment.

The Quest report, released in March, said a leak of highly-pressurized natural gas liquids from the pipeline could, under worst-case conditions, produce a flammable vapor cloud that would take three minutes to spread up to 1,800 feet away, and burn anyone within 700 feet of the leak. In Middletown, there is an elementary school less than 700 feet from the pipeline route.

Friedman said the Quest report was unbiased and based on publicly available information, so was not subject to a non-disclosure agreement.

But Kirchgasser criticized the Quest report, saying it used inaccurate information about a pumping station that affected key results. He said neither Quest nor MCCS told the township about the study until it was released.

Kirchgasser said the township hired DNV after a recommendation by Seth Kovnat, a member of MCCS who was part of the Citizens Advisory Group. Kovnat, who has been an outspoken critic of the township over the pipeline, said he made the recommendation in January after first recommending Quest and then being asked by the township to get a competing bid for the assessment, known as a Quantitative Risk Analysis (QRA).

Kovnat said that neither he nor the township knew at the time that DNV was already working for Sunoco but that he had insisted that any contractor should have no ties with the company.

“In my discussions with DNV GL, I did stress that it is critical that they maintain separation from Sunoco throughout the QRA process,” Kovnat said.

A spokeswoman for DNV did not immediately respond to a request for comment.