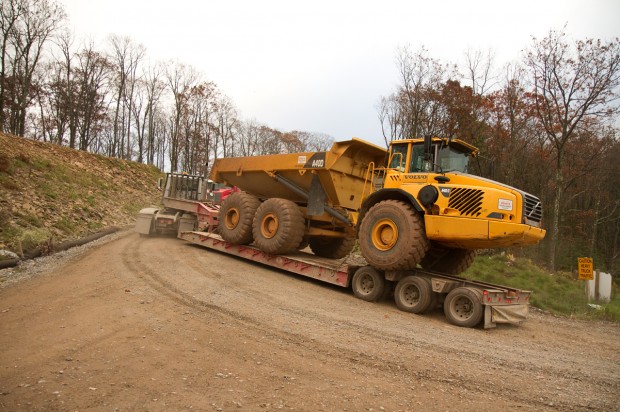 A caravan of trucks travel through the Loyalsock State Forest to a natural gas drilling site. An advocate has asked the Commonwealth Court to declare the state budget unconstitutional.

Responding to the Supreme Court’s recent decision bolstering the state’s Environmental Rights Amendment, the environmental lawyer who successfully argued the original case challenging the use of revenue from oil and gas operations on state land for non-conservation activities has asked the Commonwealth Court to declare the current state budget unconstitutional.

John Childe, with the Pennsylvania Environmental Defense Foundation, argues using proceeds from the state’s Oil and Gas Lease Fund to pay general operating expenses at the Department of Conservation and Natural Resources runs afoul of the Supreme Court’s decision, which ruled article 1, section 27, or what is also known as the Environmental Rights Amendment, requires all three branches of government to hold the state’s natural resources in public trust, incorporating all the fiduciary responsibilities associated with the state’s private trust laws.

“If that’s a constitutional use of our natural resources then we don’t have control over those funds,” said Childe. “They can’t commingle that money with commonwealth money.”

Childe says DCNR’s general operating budget for fiscal year 2017-2018 relies in part on funds from the Oil and Gas Lease Fund, which is comprised of royalty money, as well as bonus payments to the state from oil and gas companies that operate on public land.

The fund is expected to generate $80 million in royalty revenue this year, up about $8 million over last year. Gov. Wolf imposed a moratorium on new drilling leases when he took office in 2015, so no new bonus payments will be paid.

Childe writes in his motion that the Supreme Court, in a majority opinion written by Justice Christine Donohue, made clear that the funds were to go towards preservation and conservation only.

“Accordingly, the Environmental Rights Amendment mandates that the Commonwealth, as trustee, ‘conserve and maintain’ our public natural resource in further of the people’s specific enumerated rights. Thus understood in context of the entire amendment, the phrase ‘for the benefit of all the people’ is unambiguous and clearly indicates that assets of the trust are to be used for the conservation and maintenance purposes. Only within those parameters, clearly set forth in the text of Section 27, does the General Assembly, or any other Commonwealth entity, have the discretion to determine the public benefit to which the trust proceeds – generated from the sale of trust assets – are directed.”

Childe says lawmakers have a duty of “prudence and loyalty” in holding the resources in the public trust.

“The Commonwealth has to abide by those principles, and that’s unique,” he told StateImpact. “That’s a position they’ve never been in before.”

“I actually think the motion is based on a pretty clear reading of the Supreme Court decision and he’s got a good shot at this,” said Quigley, referring to Childe’s motion. “This is a natural unfolding of the decision.”

State lawmakers have approved the spending side of the budget, but not the revenue sources. It still awaits Gov. Wolf’s signature.

Governor Wolf’s spokesman J.J. Abbott says the Office of General Counsel is reviewing the motion and will respond to the court.

Wolf recently cited the Supreme Court’s decision on article 1, section 27 when he vetoed a bipartisan bill that would have forbid municipalities from banning plastic bags.