Does offshore drilling have a future off the Jersey Coast? | StateImpact Pennsylvania

Does offshore drilling have a future off the Jersey Coast? 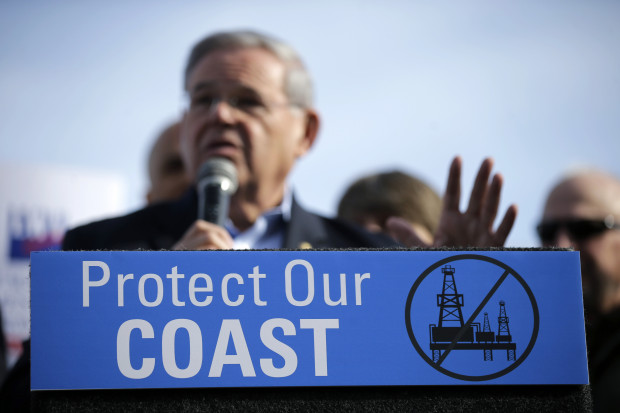 In this Jan. 31, 2016 file photo, Democratic U.S. Sen. Bob Menendez addresses a large rally in Asbury Park, N.J. The Obama administration banned offshore oil drilling in the Atlantic. But President Trump will review the policy with the goal of achieving "American energy dominance." Environmentalists and coastal businesses oppose it.

Trump administration plans to review Obama-era policy on offshore oil and gas drilling, including areas off the coasts of New Jersey and Delaware, opened up to public comment Monday. And it’s likely the Department of Interior will get lots of pushback from beach communities along the Atlantic coast, including Maryland and Virginia.

“Offering more areas for energy exploration and responsible development was a cornerstone of the President’s campaign and this action is the first step in making good on that promise for offshore oil and gas,” said Zinke.

He said the new plan would respect environmental and economic sensitivities.

Trump signed an executive order in April to review the 5-year National Offshore Oil and Gas Leasing Program on the Outer Continental Shelf, which had been approved by the Obama administration last fall. Obama had banned drilling along the Atlantic Coast.

“Under the last administration, 94% of the OCS was off-limits to responsible development, despite interest from state and local governments and industry leaders,” said Acting Assistant Secretary Kate MacGregor in a statement. “The Trump Administration is dedicated to energy dominance, growing the economy and giving the public a say in how our natural resources are used.”

But environmental groups, chambers of commerce and elected officials of both parties have come out against offshore leasing.

In June, the Cape May County Chamber of Commerce and South Jersey Republican Congressman Frank LoBiondo held a press conference in Avalon denouncing offshore drilling along the New Jersey coast and the seismic testing that would have to precede it.

“I have long warned against drilling in the Mid-Atlantic region, which would put at risk some of the nation’s most sensitive coastal and marine resources,” said LoBiondo. “There is no ambiguity of our opposition and those in Washington and within New Jersey who continue to push for these misguided and dangerous proposals should recognize the strong opposition and cease immediately.”

Exploration would require the use of air guns, which could disturb fisheries in the Outer Continental Shelf, the area under control of the federal government three miles offshore. Opponents also point to BP’s Deepwater Horizon accident in 2010 off the coast of Louisiana, which killed 11 people, damaged coastlines and impacted tourism, a strong economic driver along the Jersey coast.

“It just shows that the Trump Administration is on the side of big oil and the drill baby drill, spill baby spill crowd, than they are about the people along the Eastern Seaboard.”

“Trump is using ‘Big Oil’ to wage war on the ocean,” she said.

“To risk our coastal economy and natural resources on offshore drilling for oil and gas would also imperil our state’s environmental and economic health,” Carney said.

With oil prices so low, drillers would not be rushing out to sea immediately, but would likely secure leases for future production. The public has 45 days to comment and public hearings will follow.  The process of coming up with a new 5-year plan is expected to take two to three years.