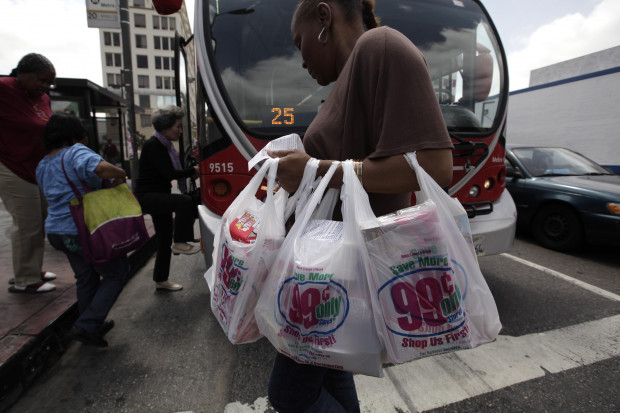 A woman carries her purchases in plastic bags in Los Angeles, Thursday, May 24, 2012. Gov. Wolf plans to veto a bill that would have forbid local plastic bag bans. Hong / AP Photo

Gov.Tom Wolf said he will veto a bill that would stop Pennsylvania towns and cities taxing or banning plastic single-use shopping bags.

The bill, HB 1071, went to Wolf’s desk after receiving final legislative approval from the Senate on June 14. It received bipartisan support, including from the lead sponsor, Democratic Rep. Mike Hanna of Centre County, who sought to protect jobs in a plastic bag factory in his district.

Wolf’s spokesman, J.J. Abbott, said Thursday he expects the governor will formally veto the bill in the next week, and will give his reasons for doing so at that time.

“He plans to veto the bill,” Abbott said in a statement. “When that is done, we will send a veto message to the General Assembly explaining why.”

Supporters say that by preventing cities limiting the use of single-use bags, the bill would help to protect some 1,500 jobs at bag manufacturers statewide, and that the governor’s promised veto puts those jobs at risk.

Matt Seaholm, executive director of the American Progressive Bag Alliance, a trade group, urged Wolf to reconsider his veto in view of the bill’s bipartisan support in both houses.

“These legislators are concerned about their constituents and the jobs in their districts,” Seaholm said in a statement. “The Governor should follow their lead.”

Seaholm said plastic bag ordinances enacted by local government restrict consumer choice, and argued that 90 percent of Americans have access to voluntary bag-recycling programs which have shown strong growth in the last decade.

Critics of the bill say single-use bags are an unnecessary use of fossil fuels, clog drains, pollute waterways, and add to waste-disposal costs in cash-strapped cities. They also argue that municipalities should be allowed to write their own ordinances on matters such as waste disposal that are legitimately a matter for local regulations rather than a statewide law.

Rep. Greg Vitali, a Delaware County Democrat who voted against the bill, said it was “great news” that the Governor is preparing to veto the bill.

“I know a lot of people reached out to Governor Wolf over the last couple of days asking him to veto the bill,” Vitali wrote in an email. “It’s encouraging that their voices were heard. Hopefully, this will result in some Pennsylvania municipalities taking steps to reduce their plastic bag usage.”

While no Pennsylvania city currently has such a law, national advocates for reduced bag use say about 160 U.S. cities have some form of law designed to restrict their use, while some countries such as Ireland have imposed taxes that have sharply reduced bag consumption.

Philadelphia, Pittsburgh and some other cities have opposed the bill, saying it would curb their ability to make their own decisions on waste management. Elsewhere, cities including Washington, DC; San Jose, Calif., and Boulder, Colo., have cut their bag use by two-thirds or more after imposing a per-bag fee on shoppers.

Mike Dunn, a spokesman for Philadelphia Mayor Jim Kenney, said Thursday that the mayor “greatly appreciates” the Governor’s decision to veto the bill because the action defends the autonomy of towns and cities to make their own policy decisions.

The bill’s vote in the House, 102-87, would be well short of the two-thirds majority needed to override a veto.