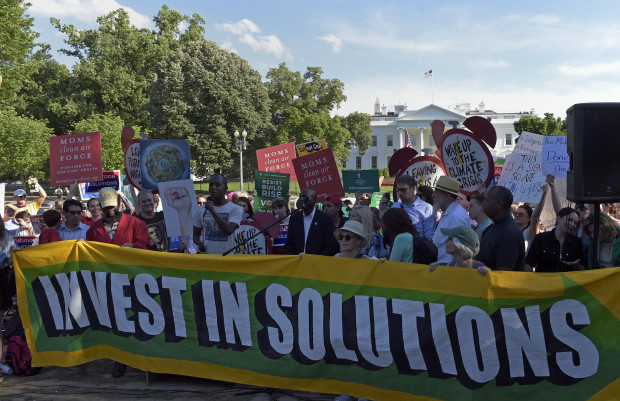 Activists gather outside the White House in Washington, Thursday, June 1, 2017, to protest President Donald Trump's decision to withdraw the Unites States from the Paris climate change accord. Some Republican members of congress have joined the Climate Solutions Caucus, and opposed the pull-out.

Citizen lobbyist Jay Butera believes in the power of polite persistence. Nearly every week for the past 10 years, he has taken the Amtrak train down to Washington D.C. from his home in Montgomery County to convince congress to take action on climate.

“There were times when it felt like this is not going to happen,” said Butera. “This is impossible, this is the most polarized issue in congress.”

Butera is a successful entrepreneur, having created and sold two businesses. But instead of courting investors, he now spends all his time volunteering with the Citizen’s Climate Lobby. He says he’s had hundreds of conversations with Republican aides and congressmen.

But despite the recent election that had Republicans take control of both houses of Congress and the White House, Butera is suddenly having some success. And it’s not just with Democrats.

“It’s not enough to try and advocate for one party or another because nothing substantive can happen unless it has support from both parties,” he said. “It feels as if the momentum is finally shifting in our favor.”

This week, Butera joined thousands of climate activists who traveled to Washington, D.C. to visit their Members of Congress to encourage them to do something about warming temperatures, rising seas and melting ice caps. They also want them to join the small but growing Climate Solutions Caucus, a group Butera dreamed up four years ago.

On Monday, about 1,000 citizens joined Butera in D.C. to knock on congressional doors with a group called the Citizens Climate Lobby, which has 400 chapters across the country, and citizen lobbyists in every congressional district. About 1,000 people visited more than 500 congressional offices. Butera says instead of confrontation, they take a friendly, calm approach to an issue that has been mired in partisan roadblocks.

“If we could get members together and talk about this in a calm way we could break this log jam,” he said.

Butera says the new bi-partisan caucus has the goal of pushing for climate solutions, specifically economic solutions. It wasn’t hard to get Democrats on board, but he spent three years looking for a Republican. By design, the caucus is half Republican half Democrat.

Butera started in Florida, a place where rising seas are already causing nuisance flooding in urban areas. He began at the local level, talking to township commissioners and Chambers of Commerce. He spoke their language.

“It has definitely helped me to have a background in business,” he said.  “From a business person’s point of view, climate impacts and the disruptions they are causing present a big risk to our economy.” 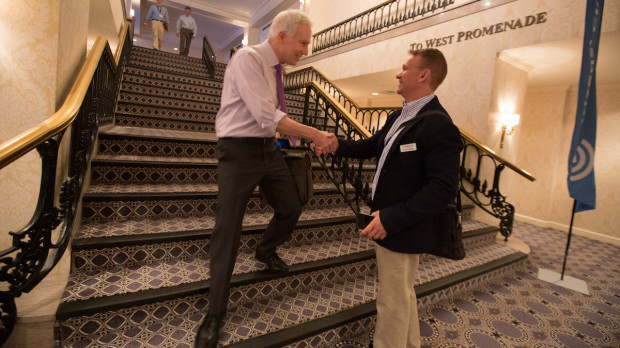 Montgomery County resident Jay Butera (L) says he spent three years working to get the first Republican to join the Climate Solutions Caucus. The group is now up to 42 members, with 21 Republican members.#39;s Climate Lobby

He found his first Republican last year. Carlos Curbelo from South Florida represents a district that is already witnessing the impacts of rising seas. Curbelo joined with Democrat Ted Deutch, another South Florida Congressman, to form the Climate Solutions Caucus in April, 2016. Since then the caucus has grown to 42 members.

“I see this wall coming down now,” he said. “Since the beginning of this year 14 Republicans have joined the Climate Solutions Caucus. That’s a startling fact. That gives me a lot of hope.”

Citizen lobbyists get Republicans on board

Once Butera got the caucus formed, he was able to galvanize members of the Citizen’s Climate Lobby to visit their local representatives in their home offices and lobby their campaigns. Some, like freshman Republican congressman Don Bacon from Nebraska, made it a campaign pledge.

Butera, along with other members of the Citizen’s Climate Lobby, recently visited Bacon in his new office on Capitol Hill to thank him for joining. Bacon said he would keep an open mind.

“I know I’m not 100 percent on every one of your issues,” Bacon told the group that included Butera and a few of the Congressman’s constituents. “But I try to look at each one, individually, and weigh it.”

So far, Congressman Bacon has voted 100 percent with Trump on environmental issues. Like many in the Climate Solutions Caucus, Bacon is from a swing district and just narrowly beat his Democratic opponent. He said tackling environmental issues associated with military bases helped him make his decision. He didn’t support Trump in pulling out of the Paris Agreement.

Twenty-one members of the Climate Solutions Caucus wrote a letter to President Trump urging him to remain in the Paris Accords.

“Remaining in the UNFCCC will strengthen American leadership on environmental stewardship and help transform today’s low-carbon investments into trillions of dollars of clean energy prosperity,” wrote the caucus members. “Withdrawing would mean squandering a unique opportunity to promote American research, ingenuity, and innovation.”

Citizen Climate Lobby member and Omaha resident Kay Carne helped convince Bacon to join the caucus. Carne says she tells politicians how personal this issue is for her. She has two daughters and her youngest is just 7-weeks old.

“My youngest will be Congressman Bacon’s age in 2070,” said Carne speaking outside Bacon’s office after the meeting. “2070 seems so far away but she’ll be 53 then and she may even live to see 2100, which is the time a lot of these scientific projections are saying temperatures will increase by 10 degrees Fahrenheit. So just thinking about their lifetime and what they could see makes this issue so much more urgent than some others realize.”

One surprising member is Darrell Issa, a California Republican who has denied the scientific consensus on climate change. The League of Conservation Voters once gave him a “Climate Change Denier” award. Issa narrowly won re-election in November against his Democratic opponent.

In suburban Philadelphia, where Hilary Clinton beat President Trump, all three swing districts have Republican congressmen who have joined the caucus.

“We really need to get past the antiquated way of thinking of this Hatfields vs. McCoy brand of politics where people are stuck, I don’t think that’s a good thing,” he said.  “We need to take a fresh look at things like how to grow the economy and protect the environment at the same time. And groups like the Citizens Climate Lobby are all about that.”

Fitzpatrick credits his time as an Eagle Scout for his passion for environmental preservation. A former FBI agent, he has not voted lock step with Trump on the environment.

Sixth District Republican Ryan Costello also joined the caucus but is less optimistic about Congress acting on climate.  He says he and his climate caucus colleagues will try to push Congress to act on things like carbon capture. But there’s little support for climate legislation in the Republican controlled House.

Will environment play a role in 2018?

While Democrats are eager to take back seats in the 2018 mid-term elections, it’s not clear how environmental issues will play out. Terry Madonna, director of the Franklin and Marshall College Poll, says in the past climate and environment were low on the list of priorities for voters.

“But I think this is going to be more important in 2018 and I think the Democrats in particular are going to make a big deal of it,” he said.

Ultimately, the Citizen’s Climate Lobby wants Congress to put a fee on carbon, which would then be funneled back to households in a monthly check. Butera says, like air and water, the atmosphere should not be a dumping ground.

“I believe in the power of capitalism to move mountains,” said Butera. “And if we can line that up to move us in the right direction, and have the profit motive drive efficiencies and drive us toward low carbon technologies that is the force that can stop climate change.”

House Republicans joining this climate caucus are not committing to this idea of the carbon tax. And so far, the caucus has not proposed any new legislation.

There’s still the issue of the fossil fuel lobby, which has more funds at its disposal than the citizen lobbyists.

“The fossil fuel lobby looms large on Capital Hill,” Butera said. “But I continue to believe the voice of voters is louder than that.”

Butera is optimistic. He thinks with Republicans now controlling Washington, many realize it’s up to them to do something about climate.

Could the future bring subsidized air conditioning to Pa.?