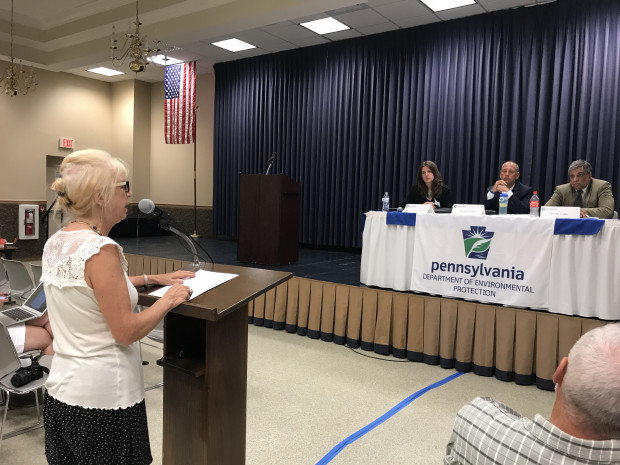 Lynda Like of Conestoga, spoke out against the pipeline to state environmental regulators.

More than 100 people turned out in Lancaster County Monday evening to weigh in on the Atlantic Sunrise, a large interstate natural gas line planned to run through 10 counties in Pennsylvania.

State environmental regulators are hosting four public hearings this week to accept public comment on pending permit applications. Williams, the company building the pipeline, is waiting for the state Department of Environmental Protection to approve so-called Chapter 102 and 105 permits, which authorize earth disturbance and water crossings. The firm is also waiting on approval from the U.S. Army Corps of Engineers. In February, Williams secured the key authorization from the the Federal Energy Regulatory Commission. Once it gets these final approvals, the company expects to begin construction in the third quarter of this year.

“We have been working closely with the Pennsylvania Department of Environmental Protection since early 2014 and are committed to utilizing construction best-practices which avoid or minimize impacts to wetlands, water bodies and other sensitive environmental areas,” says Williams spokesman Chris Stockton. “We are looking forward to securing the Chapter 102 & 105 permits, which are among the last remaining clearances needed to construct this important project and meet the state’s critical need for additional energy infrastructure.”

At the Farm and Home Center in Lancaster supporters and opponents spoke passionately about the pipeline’s impacts on the economy, the environment, and private property– with many receiving applause from the side of the room that shared their viewpoint.

“Manufacturers depend on affordable natural gas to remain competitive. projects like the Atlantic Sunrise Pipeline are vitally important to the productive sector of our Commonwealth’s economy,” says David Taylor, president of the Pennsylvania Manufacturers Association.  “Affordable gas is simply not getting to market because we lack pipeline capacity.”

Lynda Like, an affected landowner in Conestoga Township, says she doesn’t expect regulators will be responsive to her concerns.

She’s furious the government is allowing Williams to use eminent domain to take her land.

“This project should never have been forced through Lancaster county,” said Like. “Do I sound bitter? You bet I’m bitter. I’m disillusioned over a government that can allow this kind of thing to happen to the environment and to landowners.”

DEP is accepting public comment on the Chapter 102 and 105 permits through June 26. The department held simultaneous hearings Monday in Lancaster and Wyoming Counties.

Two more are scheduled for this week: