Could the future bring subsidized air conditioning to Pa.? 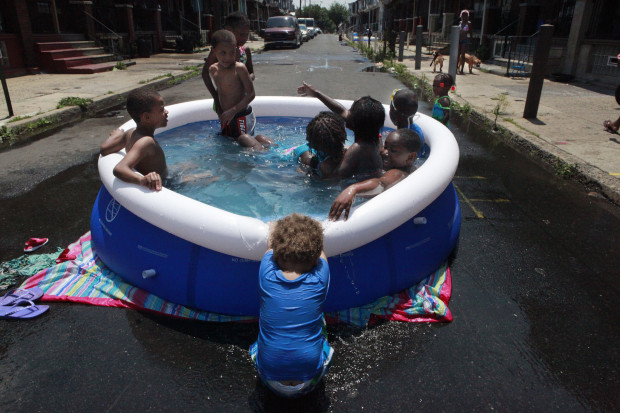 File photo: Michael Hall, 2, pulls down the edge of the pool while others swim on Wednesday, June 20, 2012, in Philadelphia. Climate change is expected to bring hotter weather to the state, which may mean subsidized air conditioning in the future.

Climate change will bring longer, hotter heat waves to Pennsylvania, according to experts. Some are worried how those living without air conditioning will survive. 2016 was the hottest year on record. It broke the heat record set in 2015, which broke the record set in 2014.  Climate scientists say it’s expected to get worse. With President Trump pulling out of the global climate agreement, there’s a new push to get cities and states to pick up the slack. And they might also have to pick up the tab.

Speaking after an event in Philadelphia on Friday, hosted by the Greater Philadelphia Chamber of Commerce, Public Utility Commissioner David Sweet said the state should look at how to bring subsidized cooling to low-income residents.

“I think that’s an area we have to look at to see if we can encourage additional government assistance in some way for the summer months as well as the winter months,” he said.

Sweet says he thinks there could be a way to do that through incentives for utilities. He says rising global temperatures put Pennsylvania’s residents at risk.

“Particularly, the elderly,” he said. “They perhaps are worried about crime, they have all the windows shut, all the doors shut, and either don’t own an air conditioner or can’t afford the electricity to run it and so they jeopardize their health.”

In hotter parts of the country, states subsidize summer cooling bills for the poor in the same way Pennsylvania targets winter heating bills, through a federal program called LIHEAP, or the Low Income Energy Assistance Program.

President Trump has proposed cutting that program, which Sweet says amounts to about $350 million dollars a year for the state’s low income residents.

Currently, cities like Philadelphia provide cooling centers during severe heat waves where residents can gather and get a break from the heat. Delaware and New Jersey use some of their LIHEAP funds for air conditioning.

Sarah Wu, from Philadelphia’s Office of Sustainability, says the city has no plans to request the state to target LIHEAP for cooling. But they are “keeping an eye on it.”

Four people died during a heatwave last summer in Philadelphia. Sweet says the PUC, along with state officials and politicians need to get creative. He says if President Trump’s budget proposal to cut LIHEAP funding gets approved, it could be up to the state and general rate payers to pay for subsidies that help low income residents afford winter heating bills.

Trump touts new Pa. coal mine, but rebound in doubt