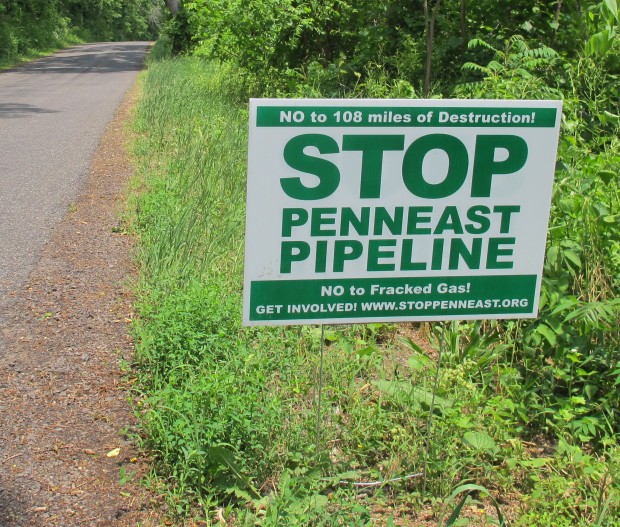 New Jersey officials underlined their concerns about the controversial PennEast natural gas pipeline project in a letter to the Federal Energy Regulatory Commission highlighting several areas where the pipeline’s builders have yet to submit information needed to obtain permits.

Bob Martin, Commissioner of New Jersey’s Department of Environmental Protection, told FERC on Thursday that the PennEast Pipeline Co. has obtained access to land in less than 35 percent of the New Jersey section of the route, which would run about 118 miles from Luzerne County, Pa. to Mercer County, N.J.

Martin’s letter also said the pipeline is due to run closer to paleological sites than is allowed by the federal regulator, and that more than two-thirds of the route in New Jersey still needs to be surveyed for historic preservation purposes.

“The Department has not been presented with information detailing site-specific impacts, mitigation and restoration plans based on completed surveys for the entire proposed pipeline route,” the letter said.

The DEP said it “strongly encourages” the company to complete all surveys before submitting applications for permits.

In late April, New Jersey rejected PennEast’s application for a water-quality permit, gave it another 30 days to revise the application, and said it would deem the application withdrawn if it didn’t receive the information within 60 days. It was unclear whether the company would meet the 30-day deadline that falls today, the Friday before Memorial Day.

Opponents of the project seized on the letter to FERC as a clear sign that the company will be unable to meet the deadline, and that the current application will be denied.

“PennEast can’t complete all surveys and analyses in 60 days,” said Tom Gilbert, campaign director for the New Jersey Conservation Foundation and ReThink Energy New Jersey. He said the company has already missed some opportunities to do required wildlife surveys this spring, and is required to survey for rare plants over two seasons.

The DEP has “made it very clear that the application that PennEast submitted to them isn’t going to fly,” Gilbert said.

That’s likely to mean that PennEast, which has been strongly opposed by environmentalists and residents on both sides of the Delaware River, will resubmit its application to New Jersey later, leading to a further delay for the project, Gilbert said.

Pat Kornick, a spokeswoman for PennEast, called the DEP letter “another procedural step” in a multi-year process that seeks permits from a number of state and federal agencies.

“PennEast appreciates the NJDEP’s technical review of the application and will continue to provide supplemental information while working within the rules established by the federal government for interstate pipeline projects,” Kornick said.

Asked to respond to the DEP’s assertion that the company has access to less than 35 percent of the New Jersey route, Kornick said that about 70 percent of landowners along the entire route — most of which is in Pennsylvania — have given permission to survey their land. She did not say whether the company would submit a revised water-permit application by the deadline.

Bob Considine, a spokesman for the DEP, said the extra 30 days the department gave when it rejected the water-permit application in late April “is not a hard deadline.”

He said the DEP may close the application if the requested information is not provided within 60 days of the date of the rejection letter. “These milestone dates are used to incentivize any applicant to address whatever is incomplete in the application,” he said.

In its letter to FERC, DEP said more than two-thirds of the pipeline route has yet to be surveyed for its effect on historic properties, and therefore it could not yet assess the impact on cultural resources. Its water-allocation division said it had received no details on water withdrawals during construction, or on the use of water for dust control or revegetation.

The letter said that FERC’s final environmental impact statement contained the same “inaccurate” information about the pipeline’s distance from paleological sites as in the draft version of the document.

The project also needs permits from the U.S. Army Corps of Engineers and the Delaware River Basin Commission. But in Pennsylvania, state officials approved PennEast’s water-quality permit in February, and FERC determined in April that the pipeline’s environmental impact would be less than significant.