A view of the PJM Interconnection control room. PJM is the largest grid operator in North America. A report out by Moody’s this week says a glut of natural gas will “wreak havoc” on the region’s electricity market.

A rush to build power plants fueled by cheap natural gas from the Marcellus Shale will swell power supply in the region coordinated by PJM Interconnection, operator of the largest power grid in North America, driving down prices and forcing the closure of many coal-fired plants over the next four years, according to a new analysis by Moody’s Investors Service.

The report predicts that power supply within the 243,417 square mile area covered by PJM will surge by 25 percent by 2021, causing on-peak prices to drop by 15 percent and leading to “widespread” closures or conversion to gas at coal-fired plants. Power grid operator PJM manages the movement of electricity to 65 million people living in Pennsylvania, New Jersey, Delaware, Maryland, Virginia, Washington, D.C., West Virginia, Ohio, and parts of Illinois, Michigan, Indiana, Kentucky and North Carolina.

“A massive construction of new gas capacity is underway in PJM to take advantage of cheap Marcellus gas, which will drive down market prices, a material credit negative for unregulated power companies,” the report said on Tuesday.

It said the Marcellus buildout will “wreak havoc” on the PJM power market. It predicted that some power generators such as Exelon and Dynegy are likely to see revenues decline by hundreds of millions of dollars, and should reduce their debt load in the deteriorating market conditions. 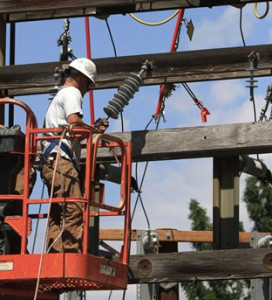 PJM’s recent summer reliability assessment reports the region has more than enough energy to keep air conditioners running. The grid operator is required to have a reserve margin of 16.6 percent of its expected peak energy demand, but it says it’s heading into the summer months with 29 percent, or about 42,000 megawatts, despite predictions of above average hot weather. The grid operator says it has planned for electricity demand to peak some point during the summer at about 153,000 MW.

The additional supply will come from plants using combined gas cycle technology, a process that produces competitively priced electricity, and is more efficient than open cycle gas turbine or steam turbine technology used by other gas-fired generators, the report said.

As the new efficient gas plants begin operation, there are likely to be “widespread” retirements of coal-fired plants, including some of the largest units on the market. A few coal plants located near gas reserves might be converted to gas but that won’t be a “panacea” for their ills because they will remain relatively inefficient, according to the projection.

Coal plants that don’t have easy access to gas are likely to shut down. “We believe that a large share of coal plants not near a gas pipeline will probably be closed,” the report said.

Surging supply will coincide with little or no increase in demand. The report projects that peak demand, when adjusted for weather, will grow by only 0.2 percent a year for the next 10 years. The flattening of demand is due, in part, to greater energy efficiency.

Within the PJM area, the effect on electricity prices is expected to vary depending on local proximity to Marcellus Shale gas, the report said. Pennsylvania and Ohio, with easy access to the abundant gas reserves, are likely to see a bigger effect than, for example, Chicago. Moody’s assumes the natural gas price in the Marcellus Shale region at $2.50 per million BTUs in the long term, and $3 at the Henry Hub, a distribution point in Louisiana. Both projections are below the current price of around $3.20.

Ray Dotter, a spokesman for PJM, said the grid operator does not speculate on or predict future energy prices.

He said PJM recognizes the efficiency of new gas-fired plants that have put competitive pressure on plants that use other fuels. “PJM has begun a discussion of resilience and wholesale electricity price formation in light of the evolving fuel mix,” he said.

Natural gas makes up the highest percentage of capacity within the PJM territory at 34 percent. Coal is behind natural gas at 30 percent, while nuclear is at 28 percent. Wind, solar and hydropower make up the rest.

There is enough potential gas capacity in the state’s permit queue alone to replace all of Pennsylvania’s coal-fired plants, but that doesn’t necessarily mean that all the proposed plants will be built because of the challenging economics described in the report, Quigley said.

The predicted decline in power prices will be good news for energy consumers, and the growing substitution of gas for coal will cut air pollution. But the declining trend in global warming emissions would be set back if gas begins to replace nuclear because that industry generates virtually all of Pennsylvania’s carbon-free energy, Quigley said.