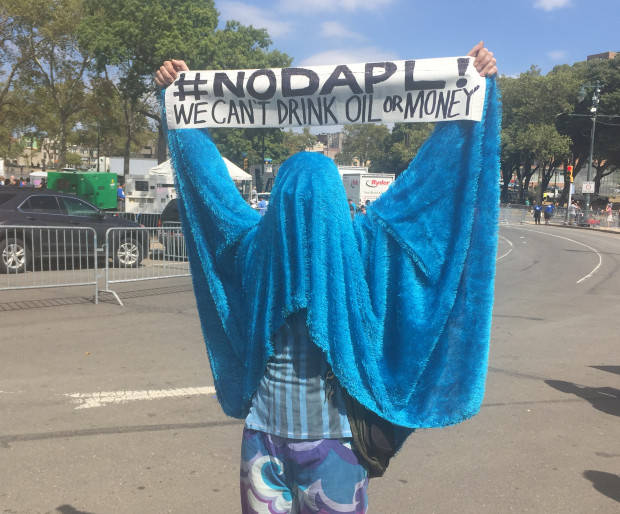 In Philadelphia, a protester stands in solidarity with Native American demonstrators in North Dakota fighting to stop the Dakota Access oil pipeline, September 13, 2016. The natural gas pipeline industry is pushing Congress to amend the Natural Gas Act to speed up the pipeline approval process.

Although anti-pipeline activists decry the Federal Energy Regulatory Commission as the agency that never met a pipeline project it wouldn’t approve, the natural gas industry says the regulatory process led by FERC is facing longer delays. The House Committee on Energy and Commerce heard testimony Wednesday about a proposal to speed-up that process, which currently involves a mix of federal and state permit approvals.

It’s not the first time Congress has considered amending the Natural Gas Act to grant FERC greater authority in coordinating the complex review process. But according to Don Santa, executive director of the Interstate Natural Gas Association of America, things have gotten worse over the past two years.

“Federal permitting agencies are taking longer, and, in some cases, are electing not to initiate reviews until FERC has completed its review of a proposed pipeline project,” he told the Committee. “These disjointed, sequential reviews cause delay and, in some cases, create the need for supplemental environment analysis.”

Santa pointed to delays created by the National Park Service for a pipeline that would cross the Appalachian trail in Virginia. He also asked for the ability to do “remote surveys” as part of the permitting application because in some cases, landowners are refusing access. Facing recent actions by New York state environmental regulators to reject two pipeline proposals approved by FERC, Santa also urged lawmakers to amend the Clean Water Act.

“It will be increasingly difficult to construct major interstate infrastructure projects of any kind without amendments clarifying the scope of authority that federal law vests in the states,” he said.

Within the past year, New York’s Department of Environmental Conservation refused CWA permits for the Constitution pipeline, and the Northern Access line. The only other time a state halted a pipeline approved by FERC by rejecting permits under the Clean Water Act was for the Islander East pipeline project in Connecticut, an action that was upheld by the U.S. Supreme Court in 2008.

Jennifer Danis, a staff attorney for the Eastern Environmental Law Center, testified on behalf of the New Jersey Conservation Foundation, which is actively opposing the PennEast pipeline project.

“The changes would inappropriately expand FERC’s Natural Gas Act authority and undermine states’ rights, and undermine the important role that other federal and state agencies play in protecting natural resources for the public,” said Danis. “The proposed changes are a solution in search of a problem, because FERC approves over 90% of projects within a year.”

FERC has given its blessing to the PennEast line, but New Jersey has yet to decide on the water quality permits the state has authority to issue under the Clean Water Act. The New Jersey Department of Environmental Protection recently told the pipeline company it had 30 days to fix its permit applications that were incomplete, in part, due to a lack of survey data where landowners refused access.

“It appears that the industry is under the belief that if any state turns down a project that means the process is broken,” she told StateImpact.