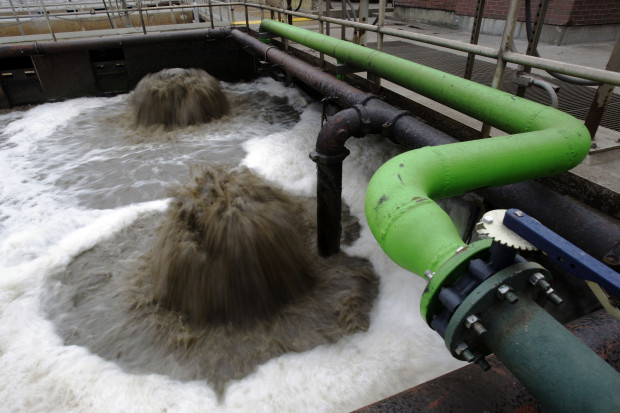 In this photo taken on Feb. 26, 2009, an aeration basin is seen in operation at the Wilmington Wastewater Treatment Plant in Wilmington, Del.

Some Pennsylvania drinking water systems have levels of contaminants that violate federal health standards, and may cause illnesses ranging from nausea and diarrhea to birth defects and cancer, according to a national report released on Tuesday. The report blames deteriorating infrastructure and lax enforcement by the federal government.

The Pennsylvania data is a subset of the report from the Natural Resources Defense Council, using public data from the U.S. Environmental Protection Agency. The NRDC analysis found that 167 Pennsylvania systems serving 691,000 people violated health standards set by the federal Safe Drinking Water Act when data were gathered in 2015.

The Pennsylvania systems that are recorded as having health-based violations had pollutants such as disinfectants, coliforms and nitrates at levels that could damage human health, the report said. Chlorine is a widely used disinfectant in water treatment systems, but when combined with some naturally occurring organic matter, it can create dangerous by-products that can lead to miscarriages and birth defects.

For example, 35 Pennsylvania systems serving more than 445,000 people broke the SDWA health limits on the presence of combined disinfectants and disinfectant by-products, the report said.

The health violations reported by the NRDC are distinguished from administrative errors like failing to report test results, which are listed as violations but do not in themselves indicate problems with water quality.

Some federal rules were established to protect people from pathogens like Cryptosporidium and Giardia that can cause gastrointestinal problems, and can be life-threatening for infants, the elderly, and those with weakened immune systems, according to the report, titled “Threats on Tap: Widespread Violations Highlight Need for Investment in Water Infrastructure and Protections.”

Public water systems were designed to address outbreaks of waterborne diseases. In 2009 -2010, the most recent data available, there were 33 drinking water outbreaks reported by the Centers for Disease Control. The outbreaks resulted in 1,040 illnesses, 85 hospitalizations, and nine deaths, according to the CDC.

Other federal rules were created to limit levels of nitrites and nitrates, which stem from agricultural runoff. Exposure can lead to “blue baby syndrome.” Some of the highest levels of nitrates in water may be in private drinking water wells in rural areas, which are not regulated by the federal Safe Drinking Water Act, and in Pennsylvania, are not subject to any state oversight. Private wells were not part of the NRDC report.

Compared with other states, Pennsylvania drinking water systems ranked 13th in the level of health-related violations, the report said.

The data have not been previously published in aggregate form, said Alex Frank, a spokesman for NRDC.

“There’s no cop on the beat enforcing our drinking water laws and we’re living on borrowed time with our ancient, deteriorating drinking water infrastructure,” Olson said in a statement.

The report says that nine out of ten reported violations were subjected to no formal action by the EPA and only 3 percent of those that were acted on were penalized.

Enforcement could become even looser if President Trump’s proposed 31 percent cut in EPA funding is implemented, the NRDC said.

Among the Pennsylvania systems listed as having violations were two operated by Aqua America: one in Philadelphia’s four suburban counties, serving about 1 million people, and another in Bradford County, serving about 17,000 people in three municipalities.

The company is recorded as having two violations for disinfectant by-products in its suburban Philadelphia market, and nine violations for coliforms in its Bradford County territory.

Chris Crockett, the company’s vice president and chief environmental officer, said the two incidents recorded as violations in the suburban Philadelphia market resulted in administrative errors related to the timing of sampling, not the actual presence of contaminants.

“There was no high level of disinfection by-products,” Crockett said. “It was literally because we collected two samples one day early. It was a scheduling error.”

In Bradford County, Crockett said he didn’t recognize nine violations but said his own records showed a single violation that resulted from an error by a contractor that took samples. When the error was discovered, the contractor was fired, and another was hired, he said.

Crockett welcomed the NRDC’s efforts to highlight the challenges to drinking water quality but said its presentation of data failed to distinguish between genuine violations of water quality, and administrative errors by companies doing the testing.

“NRDC is doing their best to put everybody into the same ranking system but in doing so they lose a lot of their resolution,” he said.

Philadelphia Water Department, with some 1.6 million customers, is listed as having one overall violation, and no health violations.

Joanne Dahme, a spokeswoman for PWD, said: “PWD has always met the health and safety requirements of the Safe Drinking Water Act.”