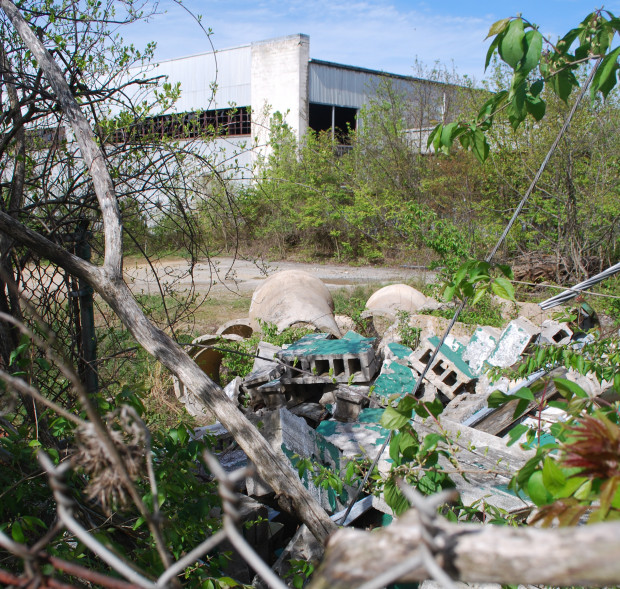 The Bishop Tube site in Malvern, Chester County where O'Neill Properties wants to build 228 houses. Current residents fear a planned cleanup would expose them to contaminants.

Residents of a Chester County community are urging local officials to reject plans for a 228-home development on a contaminated former industrial site that critics say threatens local waterways with toxic material including a known carcinogen.

Around 100 residents of East Whiteland Township called on their Board of Supervisors at a recent meeting to block a plan by Constitution Drive Partners,  a unit of O’Neill Properties, to redevelop the Bishop Tube site at Malvern where the chemical trichloroethylene, or TCE, was used as a degreaser until the steel tubing plant closed in 1999.

Opponents say that O’Neill, which has a record of redeveloping brownfield sites, plans an incomplete cleanup of the site, leaving behind quantities of TCE that could leak into local creeks that feed the Schuylkill River, which supplies around 40 percent of Philadelphia’s drinking water.

Instead of the development, many residents are calling for a comprehensive cleanup by state or federal authorities, or the potentially responsible parties, and for the 14-acre site to become open space.

But waiting for any state cleanup under the Pennsylvania’s Hazardous Site Cleanup Act (HSCA) would severely delay the process or prevent it altogether, argued Brian O’Neill, president of O’Neill Properties.

The developer also attacked the environmental group Delaware Riverkeeper Network, which has led community opposition to the project, accusing it of falsely saying that residents of the new homes will be exposed to environmental contamination by the material that would be left behind by the partial cleanup.

In fact, O’Neill argued, the cleanup will remove contaminated soil from parts of the site, and dispose of it at permitted landfills regulated by the state, at a cost of about $1.5 million, of which $1 million would be paid by a state grant that the company is currently applying for.

“This proposed soil remediation will absolutely not take place within the next six months if the development does not go ahead,” O’Neill wrote in the strongly worded letter. He also rejected DRN’s claim that the project would increase groundwater contamination, arguing that it would do the opposite by removing “source area” pollution.

To back up his rejection of DRN’s claims, O’Neill’s attorney sent the organization a letter requesting it to “cease and desist,” saying that DRN’s statements are designed to hurt the company financially, and constitute defamation and “commercial disparagement.” The letter “ordered” the environmental group to stop its public statements about the proposed development, and threatened to sue if it did not. It included a draft version of an unsigned court order.

John Dernbach, a professor of environmental law at Widener University, said disputes between developers and their opponents are common but that the letter to DRN from O’Neill’s lawyers was unusual in its language suggesting that an attorney has the authority to “order” some action from the recipient.

The letter was immediately rejected by DRN, which accused O’Neill of trying to suppress public comment by threatening a “SLAPP” suit, a legal acronym standing for “Strategic Lawsuit Against Public Participation.”

“The suit is clearly designed to silence our opposition to his partial cleanup … and seems obviously meant to send a chilling effect to all the residents who are opposed to this project,” DRN’s head, Maya van Rossum, said in a statement.

Jim Sargent, an attorney for O’Neill, rejected DRN’s “SLAPP” suit charge, saying that DRN’s charges have no basis in fact and therefore it could not claim that it’s free-speech rights were being infringed. He said DRN had falsely claimed both that O’Neill has a responsibility to clean up the contamination, and that Bishop Tube is a Superfund site.

“Everything they say is false,” Sargent said. “It’s like crying fire in a crowded theater.”

DRN opposes O’Neill’s application for the state grant, and says the partial cleanup will leave local streams such as Little Valley Creek and Valley Creek still exposed to TCE and other contaminants from the site.

DRN, in a letter on March 27, also accused the state’s Department of Environmental Protection of rolling back its previously rigorous review of the development plan, and of shifting to a more permissive stance that seeks a quick approval. DEP spokesman Neil Shader said officials are reviewing the letter.

Tom Myers, a consultant hydrologist hired by DRN, said in a report in March that TCE and other contaminants would remain on the site unless it was fully cleaned up, and that construction work could expose current residents to the substances. He said TCE concentrations at the plant site, and downhill from it are “very high.”

“Until the site is properly remediated, including unsaturated soils and groundwater, the contamination at Bishop Tube will affect water quality throughout the Valley Creek watershed,” Myers wrote.

According to the U.S. Environmental Protection Agency, TCE can cause cancer and long-term exposure to it can damage the liver, kidneys and the immune and nervous systems. In January, the agency proposed a rule under the Toxic Substances Control Act to ban the chemical when it is used as an aerosol degreaser.

At the East Whiteland meeting, residents spoke for more than two hours in unanimous opposition to the development, and called on township supervisors to withdraw their support for O’Neill’s application for state funds to help with the cleanup.

John Preston, who has lived in the township for three years, said he is worried about his health and his property value if the development goes ahead as planned, and he faulted the Board of Supervisors for supporting O’Neill’s application for state funds.

“I think they have come around a little bit because of the public outcry,” Preston said of the Board. “The intention was to sweep this under the radar so there would be as little effort as possible to object to it. However, the community has got wind of this effort, and wants it stopped immediately.”

Bill Holmes, chairman of the Board of Supervisors, said the board initially backed the funding application because it seemed to offer a way of cleaning up the toxic site after years of public protest. But in light of overwhelming public opposition to the plan, he said the board is now reconsidering that decision. “We’re looking into withdrawing our support,” he said, in an interview.

But that may not be enough to stop the project, which in 2014 secured a change in zoning from industrial to residential for the site. The development is still subject to approvals from the township’s zoning hearing board and planning commission.

“If there is not a compelling reason to deny the plan, we would have a legal obligation to approve it,” Holmes said.