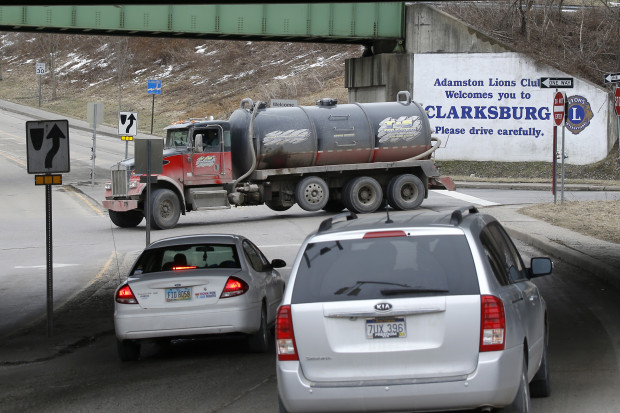 A truck carrying fracking waste water drives through an intersection in Clarksburg, W. Va. A new study found no impact to drinking water wells from fracking in northwestern West Virginia. Spills from trucks like these and other sources remain a problem.

Fracking the Marcellus Shale did not pollute groundwater in northwestern West Virginia, but wastewater spills did contaminate surface water, according to a new study from Duke University. The report adds to an increasing body of work pointing to greater risks from fracking wastewater transport and treatment, than from the process itself.

The study was unique in that it monitored drinking water wells and surface water over three years, a longer time period than previous research on the impact of fracking on drinking water. The study also used multiple methods of determining the source of the pollution, and was able to draw on baseline water quality data.

“Based on consistent evidence from comprehensive testing, we found no indication of groundwater contamination over the three-year course of our study,” said Avner Vengosh, professor of geochemistry and water quality at Duke’s Nicholas School of the Environment. ”However, we did find that spill water associated with fracked wells and their wastewater has an impact on the quality of streams in areas of intense shale gas development.”Vengosh says the study results are dissimilar from previous research in Northeast Pennsylvania where the methane found in drinking water wells was connected to fracking.
The peer-reviewed study was published recently in Geochimica et Cosmochimica Acta, a European journal. It adds to a growing body of academic research focused on the impacts of shale gas drilling, which requires high pressure water, mixed with chemicals, to be injected deep below the surface to break up the shale rock to release the gas trapped within it. Although industry says the practice is safe, concerns have grown over how often the practice can lead to groundwater contamination in areas where residents rely on well water.Vengosh said differences in geology and industry practices can play a role. And although three years is longer than previous studies, Vengosh said ground water moves very slowly, so results may be different 10 or 15 years from now.”You need to do the science,” he said. “There’s no way to avoid the science and come to a conclusion. And you have to do it in a really thorough way to determine the source of contamination.”Vengosh said the baseline data, gathered from drinking water wells before shale gas drilling occurred nearby, boosts their confidence in the results. A total of 112 water wells were sampled over three years, with 20 sampled before drilling or fracking occurred.

David Yoxtheimer, a hydrogeologist with Penn State’s Marcellus Center for Outreach and Research, who was not involved in the study, said the report is comprehensive in that it used a number of different tools to determine the source of contamination.

“This is a good example of an objective study,” said Yoxtheimer. “They kept their scientific glasses on and looked at it objectively. It’s the type of science we need more of out there. Collect data without motive and come back and report.”Yoxtheimer says the baseline data will help with future studies, if others want to revisit the area to determine if contamination from fracking occurs beyond three years, to 10 or 20 years later.The water was tested for salts, trace metals and hydrocarbons, and different methods were used to determine if the contaminants were naturally occurring or resulted from gas drilling activity.Jennifer Harkness led the study as part of her PhD work at Duke University.

“The integrated suite of tracers we used — which were developed at Duke in recent years — provides us with tools sensitive enough to accurately distinguish these subtle differences, which might be missed if you only used a handful of simple measurement techniques,” said Harkness.

The researchers emphasized the need for more monitoring of streams in heavily drilled shale gas areas.

“Because spills are occurring and we see them occurring everywhere, I think this is part of the nature of unconventional oil and gas development,” said Vengosh. “We saw it in North Dakota and we see it here in West Virginia and many other places.”

The study was funded by the National Science Foundation and the Natural Resources Defense Council.