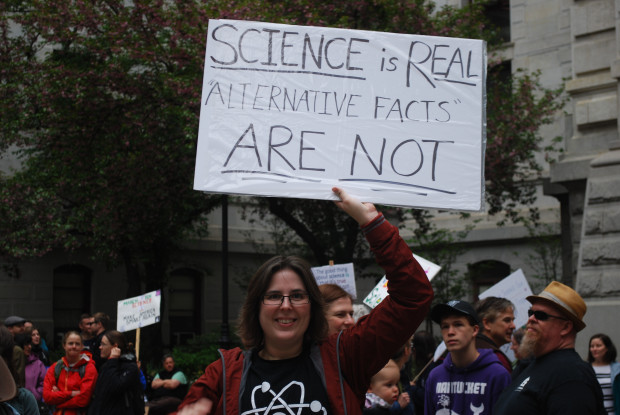 Woman holds a sign at the March for Science in Center City Philadelphia, April 22, 2017.

Thousands of people marched through central Philadelphia on Saturday to protest what they see as an anti-science bias by the Trump administration, and to urge the federal government to use evidence rather than ideology to set policy, especially on climate change.

Carrying hand-written signs such as “Without Science It’s Just Fiction” and “Science is Real, Alternative Facts Are Not,” the crowd marched from City Hall to a rally at Penn’s Landing where speakers urged participants to speak out against policies that are not based on provable science.

Many marchers said they joined the event on Earth Day because they are concerned by the Trump administration’s plans to cut funding to science-based agencies such as the Environmental Protection Agency and the National Institutes of Health, and to urge the government to follow the evidence, as supported by the overwhelming majority of scientists, in setting policy on climate change.

“It appears that they are not paying attention to science; science isn’t as important as what they believe,” said Jack Reeder, 54, a software consultant from Devon, Pa., who said the street protest was the first he had ever attended. “It’s reaching a critical mass now, so we just decided to jump in.” 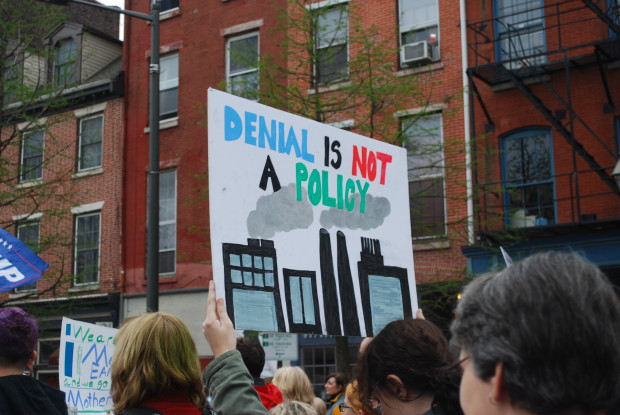 Some protesters said they understood concerns that science should not be politicized but argued that a perceived anti-science bias by the Trump administration gave them no choice but to take to the streets.

“At this point, we don’t have a choice,” said Katherine Nickerson, 26, a graduate student of oceanography at Rutgers University. “We are trying to be apolitical but science has been dragged into the political arena anyway, and as long as it’s here we may as well fight.”

Nickerson was marching with her father Scott, 60, who was visiting from Melbourne, Fla. He said he was angry that his daughter’s prospects of getting a job with a federal science agency have dimmed significantly since Trump took office.

“I have seen her job opportunities vanish in the last few months because of budget freezes and new budget proposals, doing away with EPA funds,” Scott Nickerson said. “It angers me to no end that after seven years my daughter who has put her life into studying climate change and fisheries now has to struggle for a place to apply the things she learned.”

Asked whether the demonstration could bring change, Scott Nickerson said the large crowds turning out for the science marches in many U.S. and overseas cities on Earth Day would send a message to the administration about public concern.

“The only thing you can hope for at an event like this is to see numbers on the street and to get these messages and a lot of these signs out into the media,” he said. “I saw that happen with Vietnam back in the 60s, and the sheer number of people makes people notice things.”

Amid the overwhelming opposition to Trump at the event, one supporter of the president carried a large blue Trump flag down Market Street to the rally at Penn’s Landing. Mike Nigh, 30, a software engineer from Philadelphia, said that politics had taken over the pro-science demonstration.

“A group of smart, well-meaning people came out for science and just got grouped in with just another anti-Trump march,” Nigh said.

He said he supports the president’s unsubstantiated claim that climate change is a hoax but admitted that he didn’t know much about the international Paris agreement to drive down carbon emissions.

“I’m on his side about global warming,” Nigh said. “Ten years ago they said we were going to be under water by now and everybody believed it more than they do now so they don’t really have a good track record. I’m here to show that I support [Trump].”

It’s unclear what predictions Nigh was referring to exactly. Scientists are largely in agreement that increased carbon emissions have caused global warming, which has resulted melting glaciers, sea ice. And climate research has made clear that some areas of the country would be impacted differently than others.  Much of the climate research comes from the U.S. government’s own scientists at NASA and NOAA. Nine of the 10 warmest years on record have occurred since 2000, while global average sea levels have risen about 7 inches in the past 100 years, according to NASA.

Some areas of the country, like Alaska and Louisiana, have already begun making plans to move residents from areas that will soon be uninhabitable because of rising seas caused by climate change. In parts of Philadelphia, increased nuisance flooding is predicted as a result of sea level rise.

David Kessler, 44, a lawyer from Philadelphia, said he had come because he was troubled by the Trump administration’s anti-science bias.

“They are ignoring the scientific method simply because they don’t like the results,” Kessler said. “You can argue that you don’t like the results but it doesn’t make it any less valid. Science should be neutral and objective, and you should advocate for policy that matches that evidence.”

Jack Kessler, 11, said he had come to the march with his father because he wants to curb the flooding that’s expected to come with future climate change. “When I grow up, I don’t want everything to be flooded, and I want the world to still be kind of OK,” he said.

Scientists who feel under attack, to march for political clout