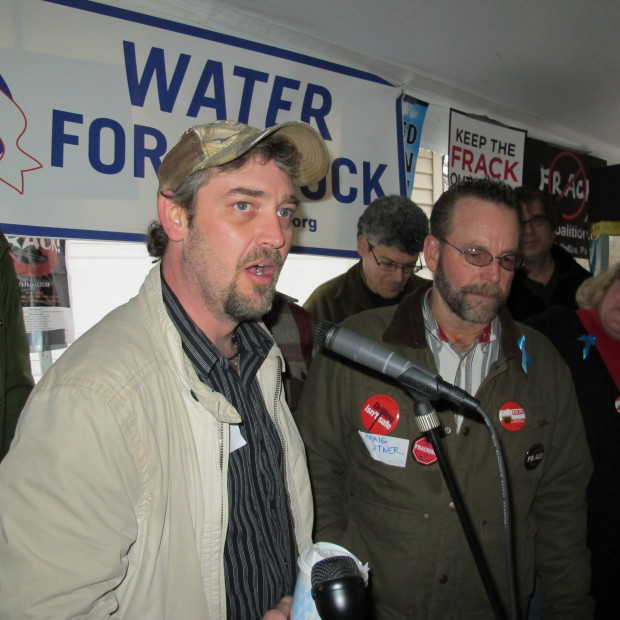 Dimock resident Scott Ely at a protest in 2012. A judge overturned a jury award for him and other Dimock plaintiffs.

A federal judge on Friday struck down a jury’s award of more than $4 million to two Pennsylvania families who claimed their well water was contaminated by gas drilling, saying the award bore little or no relationship to the evidence presented at the 2016 trial.

U.S. Magistrate Judge Martin Carlson of the Middle District of Pennsylvania ordered a new trial of the case brought by the families in Dimock, led by Scott Ely, who said at the original trial that their water had been contaminated since 2008.

The verdict in March of 2016 was hailed as a major victory by critics of the gas industry, who argued that the rural community of Dimock was a poster child for the hazards of shale gas development.

But the judge, in a 58-page opinion released late Friday, reversed the award of $4.24 million against Cabot Oil & Gas which the jury determined had been negligent in its extraction of natural gas in the community.

The judge said the evidence presented during the three-week trial was often discredited or rebutted, and was “notably lacking” in respect to damages.

He said the award “bore no discernible relationship” to the evidence, which he said was “at best limited.”

Even if the court were to find that the jury’s verdict of liability should stand, the damages could not withstand “even passing scrutiny,” he said.

Judge Carlson said he did not take the step lightly, and recognized the significance of voiding the judgment of a jury that sat through a three-week trial and reached a unanimous verdict.

But the trial record and the “substantial and varied weaknesses in the plaintiffs’ case, together with many cases of “inappropriate conduct” that occurred in the jury’s presence may have colored the outcome of the case, the judge said.

‘The Court is constrained to find that a new trial is not only justified, but required,’ the judge wrote. “Accordingly, Cabot’s motion will be granted in part, the verdict will be set aside, and a new trial will be ordered.”

But before any new trial, the parties must try to reach a settlement in an effort to avoid the time, money and effort of fresh litigation, the judge said.

He explained his ruling in part by citing the plaintiffs’ own admission that their water problems had preceded the start of drilling at the wells that the plaintiffs claimed were the source of their water contamination.

He noted Cabot’s argument that the plaintiffs’ case “crumbles at the very issue of causation” because the problems existed before the company broke ground on the wells in late September, 2008. And he appeared to support the company’s argument, saying: “The evidence unquestionably showed that the plaintiffs had begun experiencing some problems with their water before the spud date for the Gesford wells.”

The plaintiffs’ admission of the drilling date presented a “significant problem” for them but Judge Carlson said he “cautiously permitted” the case to proceed and eventually go to the jury because of some evidence that the water problems worsened and continued into 2009, and because the plaintiffs’ experts and third-party witnesses offered testimony that gave the jury a basis to consider whether Cabot’s drilling had contributed to the alleged contamination.

The judge strongly criticized the plaintiffs’ attorney, Leslie Lewis, saying she introduced evidence to the jury that the court had specifically excluded, and which he said prejudiced Cabot. Although the parties had agreed to narrow the scope of the litigation to claims of negligence and nuisance, the plaintiffs proceeded as if they were largely unaffected by the agreement, he wrote.

“As a result, the manner in which this case was prosecuted had the effect of repeatedly inviting the jury to engage in unwarranted speculation that was plainly prejudicial to the defense,” the judge said.

In her response to the ruling, Lewis rejected the judge’s criticisms.

“The jury made their decision based on sufficient legal evidence to reach the conclusion that they did, and in no way, shape or form was Cabot robbed of a fair trial,” Lewis told StateImpact.

“It was a long and difficult trial and I did my very best at the end. I vigorously advocated for my client,” she said. “Our papers were replete with law and facts and arguments that would have allowed him to use his discretion to confirm the verdict. We disagree with the conclusion across the board.”

Lewis said she had not decided whether to appeal the judge’s ruling.

Despite the jury’s verdict, Cabot immediately sought a new trial or two other possible actions in an attempt to win a new judgment. 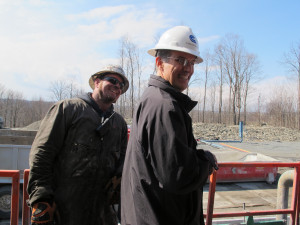 Cabot Oil and Gas spokesman George Stark with a gas worker on a drill rig in Susquehanna County. Cabot issued a statement applauding the judge's decision.

George Stark, a spokesman for Cabot, welcomed the judge’s ruling. “Cabot felt confident that once a thorough review of the overwhelming scientific evidence and a full legal analysis of the conduct of the plaintiff’s counsel was conducted, the flaws in the verdict would be understood,” he said in a statement.

Much of the evidence of contamination was not allowed to be presented to the jury, including a consent decree issued by the Pennsylvania Department of Environmental Protection, which found Cabot responsible for methane migration due to faulty well construction.

Wenonah Hauter, executive director of the environmental group Food & Water Watch, said the judge’s decision is another attack on residents who she said have been hurt by fracking.

“These residents, and thousands of others, have been abandoned by state environmental regulators, politicians, and a governor who promised to help them,” Hauter said in a statement.