In Pennsylvania, Trump’s climate order met with anger and relief 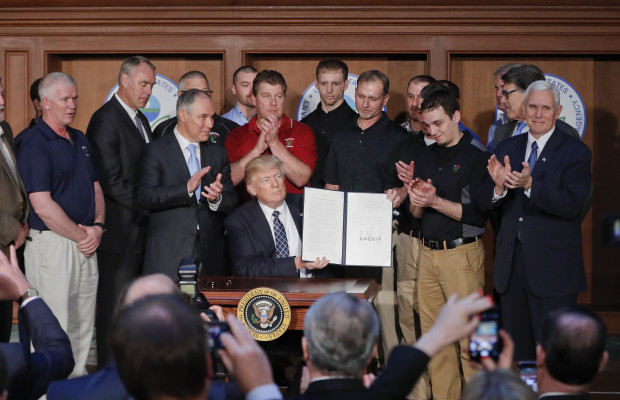 Governor Tom Wolf’s administration says it is still committed to combating climate change in Pennsylvania, despite an executive order signed Tuesday by President Donald Trump aimed at undoing the Clean Power Plan– the signature climate initiative of the Obama administration.

“The changing climate is the most significant environmental threat facing the world, and emissions from the United States are a significant cause,” McDonnell says in a statement. “Pennsylvania has already experienced a long-term warming of nearly two degrees over the past century, and this trend is expected to accelerate. Ignoring the problem will only make conditions worse for our communities and economy and environment in the future.”

The Clean Power Plan sought to reduce U.S. emissions by 30 percent by 2030. States were told to craft plans to hit their own specific targets. As the nation’s third-largest emitter of carbon dioxide and fifth-largest coal producer, Pennsylvania would have had to reduce its greenhouse gas emissions by about 32 percent.

Trump’s executive order does not address the 2015 Paris climate accord— a landmark agreement by the world’s governments to reduce greenhouse gas emissions. But the president is seeking to unwind other Obama-era climate initiatives including a recent federal moratorium on coal leasing, and a measure requiring federal agencies to consider climate change within their rule-making processes. Trump also wants to examine the “social cost of carbon”– which places a dollar amount on carbon emissions.

Trump’s action Tuesday won’t end the Clean Power Plan outright. The move will likely kick off years of litigation on the issue. The Environmental Protection Agency will have to begin a new rule-making process. Former state environmental secretary, John Quigley, now at the Kleinman Center for Energy Policy at the University of Pennsylvania, says in the short term, Pennsylvania is on track to meet its emissions targets, thanks to the increased use of natural gas.

“But over the long term, without the [Clean Power Plan], Pennsylvanians will pay the price in worsened air quality, decreased public health, and pass on even more severe climate risks to their children and grandchildren,” Quigley writes in an email. “The fact that the United States is walking away from meaningful – and low cost – action on climate change and abdicating its role as international leader is unconscionable.”

Pennsylvania is among a group of states that already requires utilities to transition to cleaner power sources. The Alternative Energy Portfolio Standard requires companies to purchase eight percent of their overall power from so-called “tier 1” renewable energy sources by 2021. That includes solar energy, wind farms, low-impact hydroelectric plants, and methane converted from landfills.

Pennsylvania has also been at the forefront of the domestic natural gas boom, which the Obama administration viewed as a key part of the solution to combating climate change. The flood of cheap gas has already undercut coal, a dirtier fossil fuel, in electric power generation.

“We’ve been through an era of regulatory overkill that’s put the boot on the throat of America’s economy,” says PMA president David Taylor. “Certainly coal is subject to market forces. There are reasons people might prefer natural gas. But [coal] ought not be disadvantaged by government actions.”

Trump has vowed to bring back coal jobs, a campaign promise appreciated by the mining industry.

“As a reliable and affordable contributor to baseload electricity, coal-fired generation is nearly a third of Pennsylvania’s electric market,” the Pennsylvania Coal Alliance says in a statement. “The Commonwealth is one of the nation’s top electric generators and exporters which keeps prices low for industry and consumers, and safeguards against blackouts when there is a sudden surge in demand.”

Environmental organizations are gearing up for a fight. The Clean Power PA Coalition, a group of the state’s leading environmental advocacy groups denounced Trump’s move as, “a direct assault on the health and well-being of current and future generations of Pennsylvanians.”

“It’s incredibly unfortunate, given all the science around tackling climate change and the overwhelming public support, that the Trump administration is trying to stand in the way of much-needed progress,” says David Masur, president of PennEnvironment. “I think it puts more pressure on our elected officials in Harrisburg to lead by example.”

Environmental justice will be focus of statewide 'listening tour'