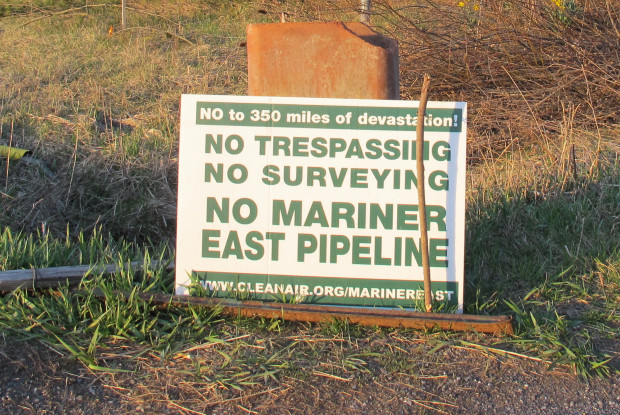 A sign protesting the building of the Mariner East 2 pipeline in Huntingdon County. Environmental groups are challenging the permits in court.

Three environmental groups on Tuesday challenged newly granted permits to Sunoco Logistics for the planned Mariner East 2 pipeline, urging Pennsylvania’s Environmental Hearing Board to block work on the line while the case is heard.

Clean Air Council, Delaware Riverkeeper Network and the Mountain Watershed Association asked the board to issue a temporary order of “supersedeas” a legal mechanism that would freeze the project while the board hears their case.

The groups may apply for the supersedeas order if they could suffer “immediate and irreparable injury” before the board hears their case, according to a document filed with the board on Tuesday. The water-crossing and earth-moving permits granted by DEP after almost three years of negotiations and delays, due to Sunoco’s incomplete and deficient applications, are controversial because it means the company could start construction on a line that is still challenged in dozens of court cases over eminent domain.

Granting the order would suspend the permit authorization until a hearing on the legal challenge takes place. Christine Walker, a secretary for the Environmental Hearing Board, said she did not know when that hearing would be held.

The board ordered the parties to attend a meeting in Harrisburg on Thursday when the applicants will be asked to address their request and a hearing will be scheduled.

The environmental groups argue that Pennsylvania’s environment will suffer “massive and irreparable harm” from the construction work by Sunoco Logistics, which the appellants say is likely to start immediately, in line with the company’s plans.

On Monday, the Department of Environmental Protection issued the long-awaited permits on water crossings and earth disturbance, ending widespread public confusion over whether or when the permits would be issued, and clearing the way for Sunoco to start construction of the controversial $2.5 billion pipeline that will carry natural gas liquids 350 miles from the Marcellus Shale of southwestern Pennsylvania to a processing and export terminal at Marcus Hook near Philadelphia.

The project has been fiercely opposed by some landowners who are fighting Sunoco’s eminent domain actions, and by some communities, especially at the densely populated eastern end of the route, who question the company’s assurances that the pipeline will be safe.

The environmental groups say the harm caused by construction would include deforestation of “hundreds of acres” of land; the crossing of streams and wetlands; the contamination of aquifers, and the disturbance of residents by round-the-clock drilling.

“Given the expansive nature of this project, for every day that passes between now and the adjudication of the Petition for Supersedeas, it is all but certain that Sunoco would cut through many acres of trees,” the document says.

Along with their case, the appellants attach a series of affidavits in which landowners and experts on subjects such as water quality say they would be harmed by the project.

Michele Adams, a professional engineer licensed in Pennsylvania and other states, said in her affidavit that the project would increase stormwater runoff and erosion, hurt water quality, and remove riparian buffers.

Another affidavit from Michael Di Domenico, chairman of the Westtown Township Board of Supervisors in Chester County, says the project would mean drilling through an aquifer that supplies water wells for him and his neighbors.

Jeff Shields, a spokesman for Sunoco, had no immediate comment on the environmental groups’ application. He said he did not know whether construction has already started in response to the new permits but said the company is due to hold pre-construction meetings with the DEP.