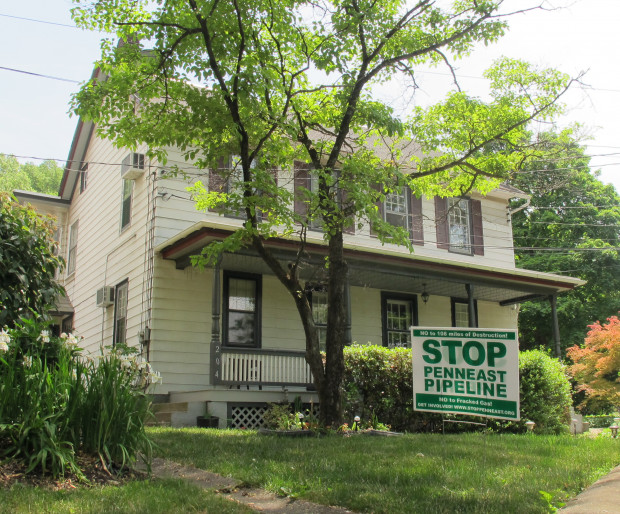 A sign opposing the PennEast pipeline project on a lawn in Durham Township, Pa. The Pennsylvania DEP issued the pipeline water permits on Friday.

PennEast pipeline company says it has received a significant water quality permit from Pennsylvania’s Department of Environmental Protection, suggesting confidence by state regulators that the pipeline can be built while minimizing impacts to waterways during and after construction. The 401 Water Quality Certification indicates the company has met requirements under the Clean Water Act, a prerequisite for federal approvals.

Kornick says the permits are a significant step in the long regulatory process that began in 2014, and that DEP informed PennEast Friday afternoon that the permits were issued.

“PennEast has reviewed hundreds of route options, and made dozens of modifications to the pipeline to minimize impact on the environment,” she said.

DEP did not return a request for comment, and the permits were not listed in the weekly Pennsylvania Bulletin.

The 120-mile, 36-inch pipeline would run from Luzerne County, through Northeast Pennsylvania, across the Delaware River, and into New Jersey, terminating in Mercer County. The project has met significant opposition on both sides of the river, where residents have raised safety and environmental concerns.

Maya van Rossum, from the Delaware Riverkeeper Network, says the pipeline will cause “irreparable harm.”

“Governor Wolf and Pennsylvania DEP are making a mockery of our environmental protection laws when it comes to these pipeline projects,” said van Rossum. “They are selling communities down the river as fast as they possibly can.”

Van Rossum says the decision took her by surprise as she had a scheduled meeting with DEP officials, including acting Secretary Patrick McDonnell, about the permits. She says the DEP has not completed the reviews necessary for making a decision on PennEast. “It’s a total sell-out,” she said.

The pipeline project is still waiting for the final environmental approval from the Federal Energy Regulatory Commission, which Kornick says is expected in April. FERC had delayed issuing its final Environmental Impact Statement after critical comments were submitted by the EPA and New Jersey DEP, both of which pointed to a lack of crucial information in the federal application.

PennEast’s Kornick says the company continues to work with the state and federal agencies and plans to have the line operational by the second half of 2018.