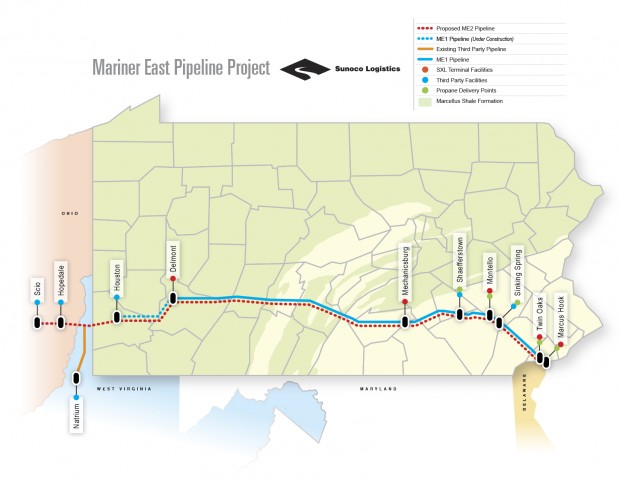 A map of the planned Mariner East 2 pipeline across Pennsylvania. DEP issued permits for the project on Monday, clearing the way for construction of the line.

The Pennsylvania Department of Environmental Protection has approved earth-moving and water-crossing permits for Sunoco’s controversial Mariner East 2 pipeline project, paving the way for construction on the 350-mile line that would begin in Ohio and West Virginia, and travel through 17 counties across Pennsylvania to Sunoco’s Marcus Hook plant in Delaware County. The pipeline would carry natural gas liquids from Marcellus and Utica Shale fields to Sunoco’s export terminal, where the plan is to ship the gas to Scotland to make plastics.

The company began its permit applications in May 2014, and was sent back to the drawing table several times by DEP for glaring deficiencies. Acting DEP Secretary Patrick McDonnell said in a release that permits were issued “after extensive review.”

“I am proud of the immense undertaking our staff took to hold this project accountable within the confines of state law and DEP’s role in this process over the last few years,” said McDonnell in a release. He said DEP staff spent more than 20,000 hours reviewing the application.

Construction on the pipeline could begin despite pending legal cases between Sunoco and dozens of landowners along the route, which makes landowners nervous. Elise Gerhart and her family have fought Sunoco in the courts as well as staging civil disobedience on their own land in an unsuccessful attempt to prevent tree-clearing. Gerhart says while she’s not surprised by the decision, she is upset.

“It’s not just a piece of paper, it’s people’s lives, it’s entire ecosystems, and watersheds and communities and homes and farms,” said Gerhart. “It means a lot, it’s pretty heavy.”

The Gerhart’s eminent domain case with Sunoco is still pending. Other lawsuits are expected now that the permits have been issued, which will challenge DEP’s permit review. Critics of the pipeline project are skeptical that the hundreds of deficiencies detailed previously by the agency could have been corrected in such a short period of time. Gerhart says the application doesn’t even include mention of her drinking water well. 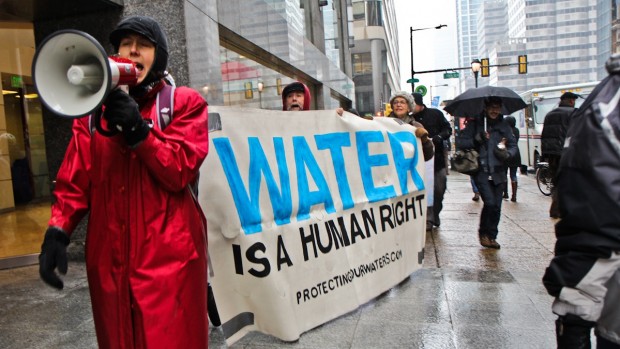 “DEP issued the permits for the ME II pipeline, despite continuing complaints from the public, citizens’ groups and environmental organizations, about risks to public health and safety, inaccurate delineation of wetlands, incomplete and deficient permit applications and the agency’s denial of repeated requests for a new public comment period,” said Pam Bishop.

But DEP spokesman Neil Shader says the deficiencies have been addressed. He also says the permits come with conditions.

Technical deficiency letters were issued by DEP in September, 2016 with Sunoco submitting revised applications in December. DEP says the agency decided against further public comment to the updated applications because none of the rights-of-ways had been changed.

In a statement, Sunoco spokesman Jeff Shields said the Mariner East 2 line will be “critical to Pennsylvania’s economic future.”

“Sunoco Logistics can now begin construction throughout Pennsylvania in accordance with the permits,” he wrote, “with estimated completion in the third quarter of this year. Mariner East 2 will require more than 8,000 construction workers to build the pipeline and related facilities.”

Shields said Sunoco Logistics is proud of it’s work to minimize environmental impact. He says construction can now begin, but will likely follow meetings with DEP and County Conservation Districts. The U.S. Army Corps of Engineers will also have to issue permits.

The state permit approvals were praised by the Pennsylvania Energy Infrastructure Alliance, a group comprised of labor unions and county chambers of commerce.

“Our guys are ready to get to work,” said Jim Kunz, business manager for the International Union of Operating Engineers (IUOE) Local 66 in western Pennsylvania. “Without the shale gas industry, our Local would have unemployment that’s 10 percent to 20 percent higher than it is today. Mariner East 2 will create even more opportunity.”