DEP Secretary Patrick McDonnell speaks at an event in Philadelphia, January 27, 2017. (file photo) McDonnell met with a group of Mariner East 2 pipeline opponents on Monday who had hoped to convince the Acting Secretary to extend public comment on the project.

Pennsylvania’s Department of Environmental Protection held a hastily arranged meeting on Monday with several opponents of the proposed Mariner East 2 pipeline in an apparent attempt to calm public concerns over the project which may soon get its final environmental approvals.

Acting DEP Secretary Patrick McDonnell plus two other DEP officials and a legislative liaison met with four pipeline activists for about 70 minutes at the DEP’s offices in Harrisburg, two of the activists said.

In addition to McDonnell, the DEP officials were Ann Roda and John Stefanko, according to Eric Friedman, a Delaware County resident and outspoken pipeline opponent who was invited to attend the meeting. The other attendees were Eve Miari, a spokeswoman for Delaware County’s Middletown Coalition for Community Safety; Alison Chabot, another member of the Middletown group, and Lynda Farrell, executive director of the Pipeline Safety Coalition.

Friedman said DEP invited him on Friday to attend the meeting on Monday but was not given a specific agenda.

Both Friedman and Miari said they failed at the meeting to persuade DEP to hold another public-comment period during which citizens would have an opportunity for input on updates to Sunoco’s permit applications.

The DEP is now considering earth-moving and water-crossing permits for the pipeline. Without them, the company cannot start construction. Sunoco’s timeline depends on construction to begin in the spring in order to have the line operational by the third quarter of 2017. There’s also a limited window to cut down trees along the pipeline’s path due to nesting habits of the endangered Indiana bat.

“My takeaway from the meeting is that the DEP is not going to accept any additional public comment,” Friedman said. “They said they didn’t have to accept any in the first place, and that they had done enough in that regard,” he said, referring to some 29,000 public comments about the pipeline already sent to DEP.

Sunoco spokesman Jeff Shields says the company does not know when the permits might be issued and that it’s a decision that rests with the DEP. The company cites a recent independent report for Delaware County’s West Goshen Township saying the Mariner East 2 pipeline meets or exceeds federal safety standards.

Miari said the DEP did not appear willing to be swayed by calls for more public input to the latest versions of Sunoco’s permit application.

DEP spokesman Neil Shader confirmed that the meeting had taken place and told StateImpact in an email that the agency “has not made an announcement about additional public participation.”

“DEP’s technical review of the materials provided by Sunoco continues,” wrote Shader, “and DEP continues to examine whether the revised materials are substantively different enough to warrant additional public comment.” 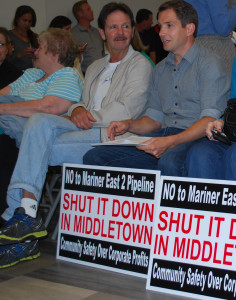 A meeting of community members in Middletown, Delaware County, one of a number of townships that has recently issued official statements expressing concern over the safety of the proposed Mariner East 2 natural gas liquids pipeline.

The meeting followed rumors last week that the DEP would issue permits last Friday, allowing construction of the controversial cross-state pipeline to begin, matching the schedule publicly stated by its builder and operator, Sunoco Logistics.

The permits were not issued last Friday, but some opponents expect the DEP to do so soon.

Pipeline opponents say DEP has been under pressure from Sunoco and from the office of Gov. Tom Wolf to approve the permits so that the company can meet its construction schedule in late winter or early spring, and begin operations in the third quarter. A spokesman for Governor Wolf has told StateImpact that the decision on Sunoco’s permit applications lies squarely with the DEP.

But that pressure was acknowledged by McDonnell during Monday’s meeting, Friedman said.

“I recall Acting Secretary McDonnell saying on two separate occasions that he had been subjected to a great deal of political and industry pressure,” Friedman said. “He’s an acting cabinet secretary and I think that political pressure on him can come from only one source and that’s the governor’s office.”

J.J. Abbott, a spokesman for Gov. Wolf, said the governor “instructed DEP to conduct a thorough review” of Sunoco’s permits, ensuring that “all regulatory requirements are satisfied.”

“The Mariner East pipeline proposal has generated significant attention from stakeholders on all sides of the issue,” said Abbott in an email, “including extensive public comment. The administration is committed to ensuring that the development of Pennsylvania’s natural gas resources, including the pipeline infrastructure to bring gas to market, is done in a responsible manner that protects the environment and the health of citizens, and includes appropriate public participation.”

Acting Secretary McDonnell’s daily calendar shows he met several times with Sunoco officials, since taking control of the department in May, 2016, according to material obtained by StateImpact through a Right-to-Know request.

Friedman said it was clear that although DEP is committed to making sure Sunoco completes their previously deficient permit applications, Secretary McDonnell told the group that at some point the permits would be issued.

Friedman says the consistently deficient applications, which Sunoco has been working on for two years, suggests that the pipeline project may not meet current regulatory requirements regarding safety and environmental protection.

“It doesn’t appear the department has a [way of] simply denying a permit based on the fact that this can’t become compliant,” Friedman said. “It appears the fix is in,” he said.

But that meeting never took place because the meeting at DEP had already been arranged, Quinn said.

In order to support the pipeline, Quinn said he needs to know it will be safe, but those assurances have not yet been provided by the Governor’s office, the DEP, or the Public Utility Commission, he said.

“I want to know that they believe that this is safe,” he said.

Pipeline opponents active against the PennEast project say they will also be meeting with top DEP officials this week.

This story has been updated to include a statement by Governor Wolf’s spokesman.