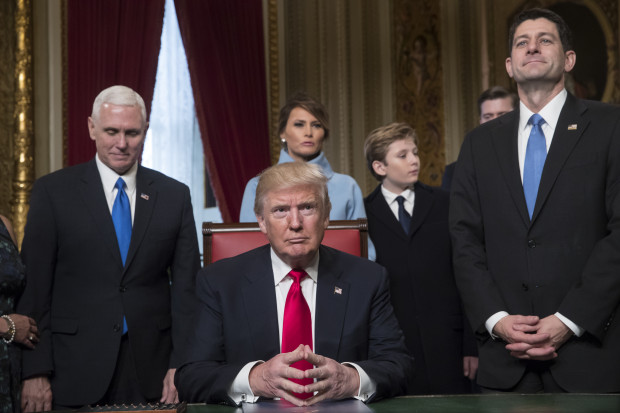 President Donald Trump is joined by the Congressional leadership and his family before formally signing his cabinet nominations into law, in the President’s Room of the Senate, at the Capitol in Washington, Friday, Jan. 20, 2017. From left are Vice President Mike Pence, the president’s wife Melania Trump, their son Barron Trump, and Speaker of the House Paul Ryan, R-Wis. Scott Applewhite / AP Photo/Pool

It didn’t take long for President Donald Trump to deliver on his energy campaign promises. Within minutes of being sworn in Friday, links to Obama’s Climate Action Plan were replaced by a smiling picture of the new president and vice president. The White House website then published “An America First Energy Plan,” which emphasizes use of domestic fossil fuels and shunning foreign oil. The plan takes aim at “burdensome regulations on our energy industry,” while embracing “the shale oil and gas revolution.”

“President Trump is committed to eliminating harmful and unnecessary policies such as the Climate Action Plan and the Waters of the U.S. rule. Lifting these restrictions will greatly help American workers, increasing wages by more than $30 billion over the next 7 years.”

Obama’s Climate Action Plan included the Clean Power Plan, the requirement that states reduce carbon emissions from power plants. The Waters of the U.S. rule outlined clarity on the smaller waterways that would be regulated under the Clean Water Act. That rule has been tied up in the courts. Response from environmentalists was quick. The climate action group 350.org said it would do everything to resist the plan.

“Trump’s energy plan is par for the course of the President’s climate denial, but it’s nonetheless alarming for the movement to keep fossil fuels in the ground,” said 350.org executive director May Boeve in a statement. “Fulfilling this plan would not only set back years of progress we’ve made towards protecting the climate, but would undoubtedly worsen the devastating impacts of the climate crisis, from rising sea levels to extreme weather.”

A spokesman for Pennsylvania Governor Tom Wolf said the state is still reviewing the impact on state residents.

“At this point, the administration, including DEP and DCNR, is closely tracking the flurry of policy changes expected in Washington,” wrote Wolf spokesman J.J. Abbott in an email. “Our focus is on evaluating the impact on Pennsylvania’s residents and communities, and examining how to most effectively respond if Pennsylvanians and their communities will be harmed. As this is all just happening, we are still in the review process.”

Pennsylvania’s Clean Power Plan had been on hold while the new regulations were being challenged in court by a number of states.

Michael Mann, Distinguished Professor of Atmospheric Science at Penn State University, and a frequent commentator on climate issues, said the Trump statement seems to confirm the new President’s campaign promises to pull out of the Paris climate accord.

“Trump has now clearly telegraphed, with his public comments, and his disastrous nominees for key posts, his total disdain for efforts to avert catastrophic climate change,” Mann wrote in an email.  “We are now, under Trump, a rogue nation.”

Larry Schweiger, CEO of the environmental group PennFuture, said that a U.S. decision to abandon the Paris accord would effectively kill the whole agreement.

“It appears to me from reading that they are in fact going to pull out of the Paris accord, and by doing that probably unravel the last best chance we have of avoiding catastrophic climate change,” Schweiger told StateImpact.

He said the U.S. refusal to ratify the 1990 Kyoto agreement on reducing carbon emissions resulted in global emissions surging rather than the decline that would have occurred with U.S. participation. That pattern now seems likely to repeat itself, Schweiger said. “Here we go again.”

“The nations have worked for 22 years to come to a common understanding, and it’s all going to be ripped apart because the Trump administration has decided that it no longer wants to be a responsible leader in climate policy,” he said.

In Pennsylvania, the natural gas industry is likely to benefit from deregulation, especially if that means a rollback of federal restrictions on methane emissions, Schweiger said. A natural gas industry facing lower costs will keep prices low, strengthening competition with coal, and undermining Trump’s campaign promises to bring back coal jobs.

“I see this as a real retreat on making sure we are producing gas in a safe way,” he said.

John Quigley, Pennsylvania’s former Environment Secretary, said the expected retreat from the Paris accord would mean the U.S. abandoning its global leadership on climate policy.

“The assumption is that he is going to try to make good on every one of his campaign promises, and that’s bad news for the planet. It’s bad news for American leadership, for the U.S. economy, and for public health,” Quigley said. “There is no reason to believe that there isn’t going to be a systematic attempt to undo everything that the Obama administration did.”

Trump’s promise to kill the Waters of the U.S. rule won’t directly affect Pennsylvania because its small waterways are protected by the state’s Clean Streams Act which affords more protection than the Clean Water Act that underlines the rule, Quigley said.

But he argued that removal of the Waters rule would encourage Pennsylvania state lawmakers who want to kill any state law that provides stronger environmental protections than its state equivalent. The state initiative, he said, is “vastly more worrisome.”

The America First Energy Plan also pledges to “refocus the EPA on its essential mission of protecting our air and water.”