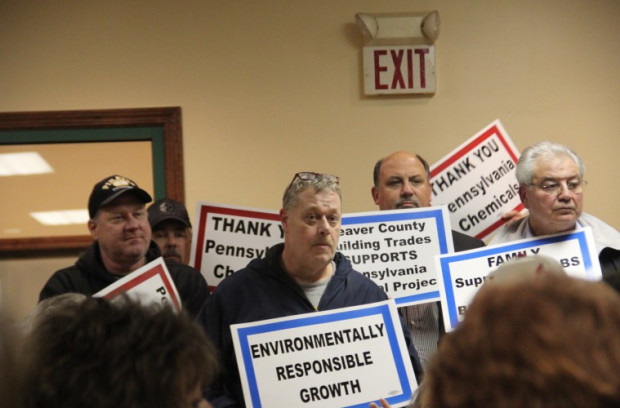 Shell moved another step closer toward building its massive chemical plant near Pittsburgh. Supervisors in Potter Township approved the company’s conditional use permit to build an ethane cracker on the site of a former zinc smelter.

Supervisors voted 3-0 in favor of the permit. Shell needs the permit to build a plant that will make plastic from the region’s natural gas. The agreement includes provisions that Shell would limit and monitor light, traffic and noise at the plant.

Supervisors say they’ve spent years reviewing Shell’s plans, ever since the company announced it was considering the site in 2012.

“We began five years ago, doing our homework, and this has been a very carefully, and publicly conducted process, so I think we’ve more than satisfied our due diligence,” said Rebecca Matsco, chair of the township supervisors.

Over 100 people crammed into Potter Township’s town hall to attend the meeting, with those both for and against the plant in attendance. Among those who came was Tom Melisko of the Beaver County Building Trades, which will supply some of the 6,000 workers needed to build the plant. Melisko and dozens of others carried signs that supported the plant at the meeting, with slogans like “Thank You Pennsylvania Chemicals,” a reference to Shell’s name for the project.

“We all care about our environment. But we also need jobs in this area, and we believe you can accomplish both,” Melisko said.

Dozens of others came to protest the permit. Terrie Baumgardner, of Aliquippa, said she was worried about air emissions from the plant. It would be the largest emitter in the region of smog-inducing chemicals.

“There’s this impression created that health has to be sacrificed for jobs, and I don’t think that’s the case,” she said. “I think that’s a myth being perpetrated and echoed, and there’s no reason we have to choose between health and jobs. It’s a false choice.”

Environmental groups opposed the permit because they said the township didn’t take into account environmental impacts from the plant, or allow the public time to properly vet the decision. Copies of the resolution granting the permit were not made available at the public meeting Wednesday. Matsco said it would be available “eventually” by right-to-know request.

The plant will create 600 permanent jobs once built. Shell still is waiting on environmental permits from the state.

Shell spokesman Michael Marr said in an e-mailed statement: “We greatly appreciate the Supervisors’ due diligence and their careful consideration throughout the process.”

Environmental groups are appealing an air permit given to the company from the state, and oppose its draft water discharge permit.

Note: This story is from the Allegheny Front, a public radio program covering environmental issues in Western Pennsylvania, airing on WESA in Pittsburgh and on stations throughout the region.