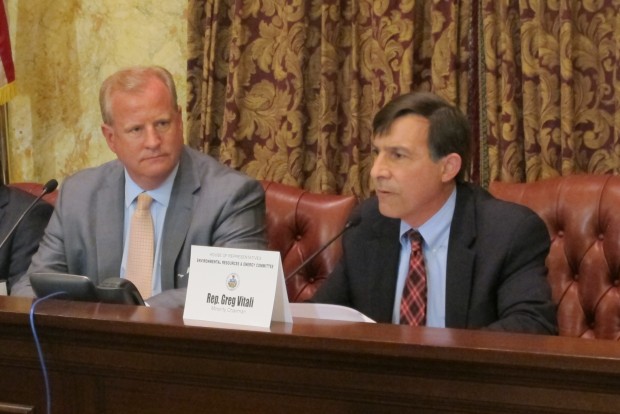 The outspoken environmental advocate learned Thursday he would no longer serve as Democratic chair of the House Environmental Resources and Energy committee. Instead, Vitali was reassigned to chair the State Government committee, a post he’s considering declining.

He views the move as punishment for repeatedly speaking his mind. Over the years he’s managed to ruffle feathers on both sides of the aisle.

“In some regards, I feel like John Quigley,” says Vitali, referring to the former state environmental secretary, who left amid controversy over an angry email. “He devoted his life to environmental policy. He incurred the ire of those he spoke out against, and he was gone.”

But Vitali’s criticism Tuesday on the House floor of new rule changes was the “straw that broke the camel’s back,” he says.

“We first got notice there were going to be changes to the rules Monday afternoon, and that was a national holiday,” says Vitali. “These rules will allow [the leadership] to get bills through with much less notice and less debate.”

Vitali says he received virtually no notice he would lose his committee assignment. On Thursday afternoon he found staff of House Minority Leader Frank Dermody in his office, removing the computer of a staffer who is being transferred the new committee chair, Rep. Mike Carroll (D- Luzerne).

Michael Herzing, a spokesman for Dermody, says he wouldn’t characterize the change as a punishment for Vitali.

“State government and ethics and reform have always been big issues for him, as well as the environment,” says Herzing. “[Vitali] did have a discussion with the leader. That doesn’t mean he’s happy about it.”

Committee membership lists have not yet been announced. Herzing he’s not sure whether Vitali will remain on the Environmental Resources and Energy Committee or not.

Vitali says regardless of his role, he intends to continue working on environmental issues, including promoting new methane rules for oil and gas sites, and new regulations for conventional drillers.