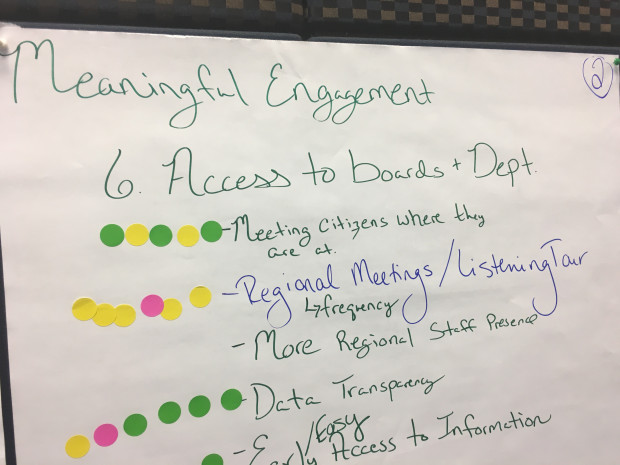 Under Governor Tom Wolf, the state Department of Environmental Protection pledged to renew its focus on environmental justice. The idea is to protect marginalized communities, such as minorities and people in poverty, who often bear the brunt of industrial development.

However, in a bizarre episode at a public meeting in Harrisburg Wednesday, two DEP advisory panels, including one specifically tasked with environmental justice, ignored a concerned citizen from a low-income area who had driven hundreds of miles to attend the meeting, and instead engaged in a lengthy discussion about improving public outreach.

She spent time there as a child, fishing with her father. It’s also where she got married. So when she heard Consol Energy would be allowed to do more coal mining under the park, she was worried. The state had blamed the company’s mining operations for destroying the park’s lake a decade ago.

Coptis drove 200 miles to a public meeting in Harrisburg to voice her concerns.

“I had to find a babysitter for my 3-month-old daughter,” she says. “My car needs tires. I don’t have money to fix it right now, so I had to borrow a car.”

Her home and Ryerson Station State Park are both in areas officially designated as environmental justice zones. As deputy director of the Washington-based environmental advocacy group, the Center for Coalfield Justice, Coptis has spoken to a lot of government agencies before.

“But this is the first time I ever blatantly felt like I didn’t matter,” she says. “I wasted my time and I wasn’t heard.”

After sharing her concerns with the committees, Coptis told them she’d heard the permit had already been issued.

“I just wanted the Acting [DEP] Secretary to tell me what the status of the permit was. Was it issued? Was it not? Were they still deciding? It’s ok if he didn’t know,” she says. “There was just no response whatsoever.”

Actually, there was a response. The DEP’s director of external affairs, Katherine Hetherington Cunfer, told Coptis the agency could only accept public comments and couldn’t respond.

Coptis told the committees she felt insulted. It wasn’t a complicated question, and there were no other members of the public in attendance who provided comments or questions. The gathering was a joint meeting of the agency’s Citizens Advisory Council and Environmental Justice Advisory Board– two committees charged with ensuring robust public participation.

Ironically, after Coptis left the room, DEP’s Acting Secretary Patrick McDonnell got up to give a PowerPoint presentation regarding the department’s public participation policies.

The committees then spent more than an hour discussing ways to better engage the public. They took out Sharpies to brainstorm ideas on big sheets of paper and put colorful stickers next to the ideas they liked the best. Statements like, “meeting citizens where they are at” got a lot of stickers.

Joanne Kilgour, who heads the Pennsylvania chapter of the Sierra Club, was at the meeting and says she was disappointed so much effort went into theoretical, rather than actual, public participation.

“These are often the only forums that community members have to access to the decision makers, who are making key decisions that affect their daily lives,” says Kilgour. “It’s not just insulting. It runs counter to the principles of our democracy.” 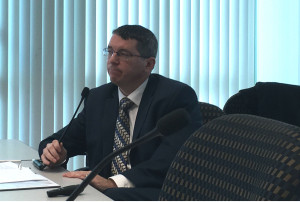 Acting DEP Secretary Patrick McDonnell says he was caught off guard by the incident.” credit=”

McDonnell says he was caught off guard by the incident with Coptis, and would have liked to see things go differently.
“My hope was that she was going to sit down, so we could have had a conversation, but she left,” he says.

After she left the DEP, Coptis went on to pre-arranged meetings with the governor’s office, and the state Department of Conservation and Natural Resources, which manages Ryerson Station State Park.

Coptis expects to hear back from the DEP either by email or with an offer to meet. And it turns out she was right, the department did indeed issue the permit.

But she’d like to see more sunshine in the process.

“I don’t want these behind-closed-door conversations. This administration prides itself on transparency. I want this to be on the record, for media to have access to it, and for community members to have access to it,” says Coptis. “These closed-door meetings are just part of the problem with how permitting happens in Pennsylvania.”

Dr. Horace Strand is a member of the DEP’s Environmental Justice Advisory Board, and says the agency was just following protocol around taking public comments, but he thinks that should probably change.

“I think we have to revisit the protocol and make it more friendly towards citizens who invest their time and effort to come here,” he says.

A spokesman for Consol calls the new permit is a success story, and says the company is working closely with the governor’s office to ensure rigorous environmental compliance.