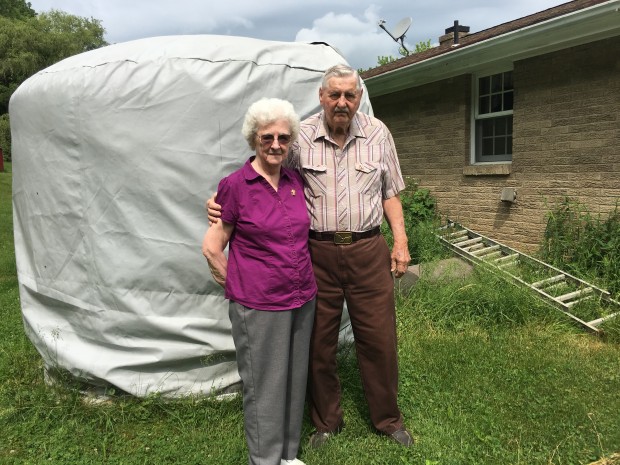 Shirley and Jesse Eakin of Washington County stand in front of their 2,500 gallon water buffalo. The couple lives on $27,000 a year and has not drank their well water since 2009. Without conclusive proof linking their water problems to the gas industry, they buy their own water and receive donated bottled water.

At a recent legal forum in Harrisburg, a prominent natural gas industry executive suggested his company tries to avoid drilling near rich people.

“I was infuriated when I heard it,” says Patrick Grenter, of the environmental advocacy group, the Center for Coalfield Justice. “I was sitting with some colleagues and I said to them, ‘Did he really just say that?’”

Terry Bossert of Range Resources had suggested the company tries to avoid putting its wells near big houses where people may have the financial means to fight them. A few weeks later, after the Pittsburgh Post-Gazette got wind of the remark, Bossert issued an apology.

He said he’d made a mistake by attempting to “interject dry sarcasm” at the event. Neither Bossert nor Range Resources would comment for this story.

But his remark put a renewed focus on the issue of environmental justice—meaning it’s often poor and marginalized communities who end up bearing the brunt of industrial development.

In Pennsylvania an Environmental Justice (EJ) zone is defined as a census tract where at least 20 percent of people live in poverty and/or at least 30 percent of the population is minority.

“We do think those are two significant indicators that need to be valued,” he says. “But we think the discussion should be bigger.”

Permit applications for some things, like landfills or coal mines, in EJ zones trigger more scrutiny from the state Department of Environmental Protection. But that’s not the case with oil and gas permits.

Kirk Jalbert is with the Pittsburgh-based, FracTracker Alliance, a group that uses data analysis to track the risks of oil and gas development.

“There are over 9,600 unconventional oil and gas wells in Pennsylvania,” says Jalbert. “Only five percent of them exist within present designated environmental justice census tracts.”

That’s because Pennsylvania’s Marcellus Shale boom has largely been in rural areas, where much of the population is white.

Both are retired, now in their 80’s. They live in rural Washington County about 30 miles southwest of Pittsburgh.
Their annual household income is around $27,000, and Shirley says they’re spending about $100 every six weeks to fill up a massive water tank in the backyard.

“This is our water buffalo,” she says, pointing to the tank. “Twenty-five hundred gallons we have to buy.”

The Eakins began having problems with their well water around 2008. It was the same time gas drilling began near their home.

Since they didn’t have any pre-drill (or baseline) water testing, there is no way to prove their well water issues are connected to gas development, but the couple has been dealing with years of disruptions.

“Quite a few times in the middle of the night our alarms have gone off. And we’ve had the house shake.”

Shirley says they’re too old to move at this point

And even if they tried, she doesn’t think anyone would want their house.

“If you don’t have water and good air. What do you have? Nothing.”

After the controversy over the comment from the Range Resources executive, Jalbert decided to delve into this issue. He built a map of gas wells in census tracts within a three-county region around Pittsburgh. It includes urban, suburban, and rural communities.
He found that among the 779 unconventional gas wells, almost all of them are in census tracts where the median home value is below $200,000

Jalbert is quick to point out that doesn’t prove Range Resources, or any other gas company deliberately avoids rich people and their big houses. For one thing, there’s a lot more room to work in rural areas. Also, wealthy people may simply be less inclined to lease their mineral rights because they don’t need the money.

Nevertheless, Patrick Grenter thinks the a renewed focus on environmental justice is a good thing.

“The fact that we’re having this discussion is important,” says Grenter.

But this was a big priority for Secretary John Quigley, who recently left the department, amid disputes with Governor Tom Wolf’s administration and the legislature. That development has Grenter a bit worried.

“Certainly, Secretary Quigley’s resignation is a cause of concern for us. We have seen past administrations in Pennsylvania—both Democrat and Republican—completely fail on issues of environmental justice.”

It’s not yet clear whether things will change much. The newly-appointed head the DEP’s office of Environmental Justice wouldn’t comment for this story.

This story has been updated to reflect the following correction: a previous version misstated Jesse Eakin’s name.